“OMG… just turned on Fox News And there’s Chris Wallace, Juan Williams, Donna Brazile, Jonah Goldberg all at same table. Almost sprained my wrist switching the channel. That was a close one. Whew!”

— Juanita Broaddrick, who has accused Bill Clinton of raping her in the late seventies.

MOOD: “I don’t know who needs to hear this but the purpose of twitter is not asking people to explain things to you that you can easily google.” — Jessica Huseman, reporter, ProPublica, teaches at Columbia.

“I already got a text from one of my girlfriends telling me she’s getting it for my birthday. LOL it’s a great gag gift. Literally.” — Darla Shine, wife of Bill Shine, former deputy director of communications in Trump’s White House, former executive, Fox News.

Journo shows up to dinner party in his jammy’s

“Wife said we’re going to a casual dinner with friends and everyone is chilling and wearing pajamas. ‘Really?’ I asked. ‘Yes’ she affirmed. So I change into my pajamas. We arrive at the house. 30 guests. No pajamas. Awesome.” — Wajahat Ali, contributing op-ed writer, NYT, contributor, CNN.

“Everybody knows that Joe Biden‘s wife and baby were killed in a car crash in 1972. This is unnecessary and appalling.” — Olivia Nuzzi, reporter, New York Mag.

The story is by Spencer Ackerman.

“Reviewing Biden’s record on Iraq is like rewinding footage of a car crash to identify the fateful decisions that arrayed people at the bloody intersection. He was not just another Democratic hawk navigating the trauma of 9/11 in a misguided way. He didn’t merely call his vote for a disastrous war part of ‘a march to peace and security.'”

Washington journo chokes up over scene in ‘Dirty Dancing’

“True story: choked up at a bar last night because they were playing “Dirty Dancing” on the TVs and it was the final dance scene where they successfully land the lift.” — Eddie Scarry, commentary writer, Washington Examiner. The Mirror has confirmed that this is serious.

On Prince Harry and Megan Markle

“Hello I am back on twitter and ready to support Meghan Markle in any way I can.” — Shay Spence, food editor, People.

“A 13 year old boy saw the paparazzi chase his mother to her death. Don’t tell him to ‘move past it.’ If this is how he believes he can best protect his young family, more power to Harry.”— Joe Scarborough, MSNBC’s “Morning Joe.”

What’s true and what isn’t…

This interview conducted by ex-FNCer Megyn Kelly is nothing short of amazing and what everyone should strive for in journalism. Three women who worked at Fox News along with her husband, Doug, help review the movie. This is a must-watch if you haven’t see it already.

“I wasn’t sure if I wanted to say anything re Bombshell, a film re sex harass. at Fox,” she tweeted. “But in the end I wanted the women who lived it to have the last word. A group of us got together & watched, cried, & set the record straight.”

“In interest of full disclosure, our dear friend [Axios’s] @jonathanvswan is also moderating our DC book launch event, Thursday evening, Feb. 13 at the Politics and Prose near Union market. …I demanded that he make it an incredibly hostile, deliberately painful interview for us. I’ll be reminding all you fools with some regularity for the next month, but for now: Hope to see you there! If you can make it, please come armed with your remarkably aggressive, mean questions especially for @lachlan who is very nasty and unfair to mister trump in the book.”

Jonathan Swan, Axios: “I plan to hold these fake news bastards’ feet to the fire.”

The Book: Sinking in the Swamp by Lachlan Markay and Asawin Suebsaeng.

“I am still a member via @WNYC, and still a believer in public radio. But after 20+ years of waking up to @MorningEdition, I cannot listen to it any longer. The product is made for someone else: People who think the two parties are roughly similar, but have different philosophies.” — Jay Rosen, J-School prof, New York University.

Day in the life of a journo…

Olivier Knox, SiriusXM: “A first for me: Uber driver appears to be a priest.”

“If it were possible, would you subtract one day off your life and add it to Ruth Bader Ginsburg’s life for one extra day of good health? If just 10,000 people did this, it would add 27 productive years to her life.” — Roger Simon, columnist, Chicago Sun Times, former columnist, Politico.

“‘Was getting my son ready for bed and he put his arm through the neck hole instead of the sleeve. ‘Wrong hole,’ I said. Me in my head immediately: ‘that’s what she said.’ Also me in my head: ‘how are you even a father?'” — Jason Howerton, TheBlaze. 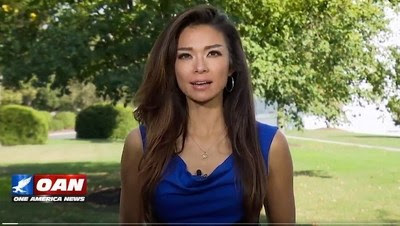 Chanel Rion graduated from Harvard with a degree in International Relations.

CEO Robert Herring Sr. remarked, “She’s fully engaged in the news cycle and not afraid to ask the tough questions.”

Victoria’s Secret model Gigi Hadid showed up for jury selection at Harvey Weinstein‘s sexual assault trial and it doesn’t look like she wants to be anywhere but there. Here.”

“The end is coming and it will end abruptly.” — Anthony Scaramucci, 11-day communications director for Trump, a man he now badmouths any chance he gets. (RELATED: That Time Scaramucci Put In Plug For Mark Halperin’s Book)

Gameshow host has sense of humor

Wheel of Fortune‘s Pat Sajak: “I’m sick of hearing how we celebrities are in some kind of bubble and we don’t understand real life. When I’m out in public and people approach me, I’m always interested in what they have to say to my security detail.”

A hypothetical q for VP Pence

“If a woman is the Dem VP nominee, will [Mike] Pence debate? Will he need to have “Mother” on the debate stage with him to help keep him from acting on his uncontrollable sexual desires he totes has for women and why he says Jesus won’t let him work one-on-one w/ women in the workplace?” — Cheri Jacobus, #NeverTrumper, pundit, writer.

Reporter won’t talk crap about D.C’s Metro for a good while

“WMATA stopped everything to get my earbud off the tracks, I’ll never complain about them again.” — Giullaume Pierre-Louis, Washington Examiner, formerly The Daily Caller.

“In my 53 years on earth, I have saved three people’s lives. One toddler choking on the F train. One baby in Haiti post earthquake. One woman who started to drown in a pool.” — Soledad O’Brien, host, Hearst’s Matter of Fact, former CNNer.