Though the outcome was far from certain, a number of justices seemed to think that prosecutors abused federal anti-corruption statutes to obtain indictments against Bill Baroni, a Christie appointee to the Port Authority of New York and New Jersey, and Bridget Kelly, the governor’s deputy chief of staff. Kelly and Baroni say prosecutors are criminalizing bare-knuckle politics.

Christie, whose presidential aspirations were derailed in part by the so-called Bridgegate scandal, joined Kelly in the courtroom Tuesday.

At Kelly’s direction, Baroni reallocated traffic lanes over the George Washington Bridge in September 2013 to cause gridlock in nearby Fort Lee, New Jersey. They did so because Fort Lee Mayor Mark Sokolich, a Democrat, refused to endorse Christie’s reelection. The pair commissioned a bogus traffic study to justify the lane realignment.

Federal fraud laws make it a crime to obtain property by deceit. Prosecutors say Kelly and Baroni did just that. The Port Authority paid out some $3,700 in additional wages to cope with the high volume of traffic. Agency engineers spent 37 hours conducting the phony traffic study, amounting to about $1,900 in labor costs. What’s more, prosecutors say the defendants’ scheme deprived the Port Authority of its exclusive right to allocate traffic lanes.

A jury convicted Kelly and Baroni in federal court of conspiracy, wire fraud and defrauding a federally funded entity in 2016. Kelly received an 18-month jail sentence. A judge sentenced Baroni to 24 months. The 3rd U.S. Circuit Court of Appeals upheld the convictions in 2018.

“The defendants in this case committed fraud by telling a lie to take control over the physical access lanes to the George Washington Bridge and the employee resources necessary to realign them,” Eric Feigin, a Justice Department lawyer, told the high court Tuesday.

Justice Elena Kagan was skeptical. She said the defendants didn’t take property in a tangible sense — they merely realigned traffic lanes. As such, she suggested the Port Authority wasn’t defrauded of anything.

Chief Justice John Roberts noted the goal of their scheme was to cause a traffic jam, not procure property for themselves. 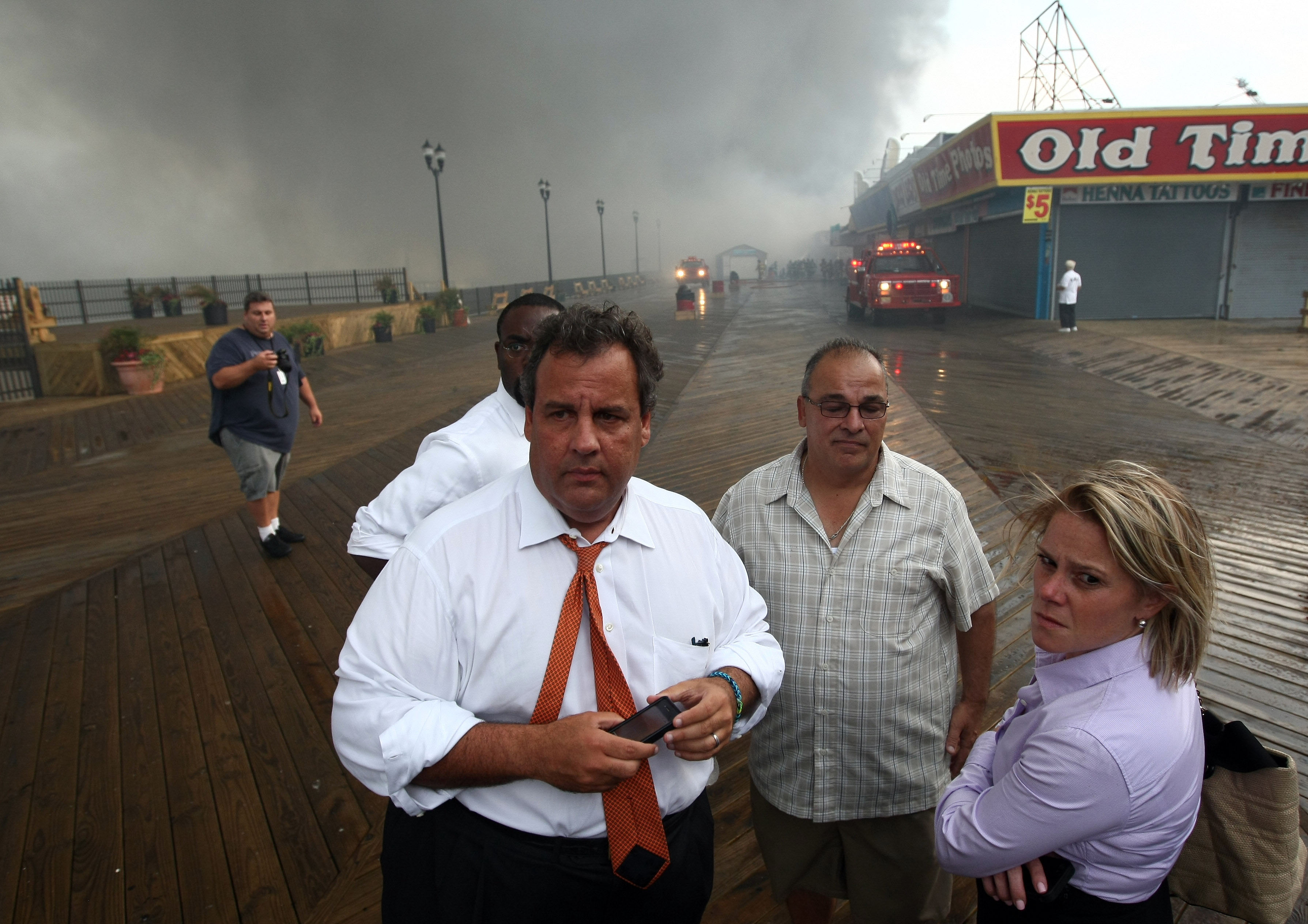 Former Gov. Chris Christie is pictured with  his deputy chief of staff, Bridget Anne Kelly, after a fire at the Seaside Heights boardwalk in September 2013. (Tim Larsen/Office of the Governor Of New Jersey via Getty Images)

Another question in the case is whether Baroni had authority to realign the lanes on his own. The answer to that question is unclear because Baroni shared power with another official pursuant to a longstanding agreement with the state of New York. Both the prosecution and the defense agree, however, that Baroni’s conduct is not criminal if he had power to apportion lanes.

Justice Sonia Sotomayor wondered if the sham traffic study is evidence Baroni did not have unilateral power to reallocate traffic lanes.

“If, in fact, the reality of the situation was that Mr. Baroni couldn’t do this without the executive director’s acquiescence or acceptance, doesn’t that show his lack of authority?” Sotomayor asked.

“Taken seriously, it would allow any federal, state, or local official to be indicted on nothing more than the (ubiquitous) allegation that she lied in claiming to act in the public interest,” Kelly’s lawyers told the justices in a legal filing.

The same filing invokes the 2019 litigation over Commerce Secretary Wilbur Ross’s bid to add a citizenship question to the 2020 census form. In that decision, the court said Ross gave a seemingly contrived explanation for his actions. If the government’s argument is correct, Kelly’s lawyers said, Ross could be prosecuted for fraud.