In an article about how impeachment managers are selected, The Guardian included a joke tweet claiming the process involves “an NFL style draft” and obstacle course Tuesday.

House Speaker Nancy Pelosi said in a private caucus Tuesday that the House will vote Wednesday on whether to send the articles of impeachment of President Donald Trump to the Senate. The Guardian appeared to fall for director at Bullpen Strategy Group Joe Perticone’s joke tweet while giving a rundown of how the process works.

“There’s a skills challenge and obstacle course, then based on those results, it works NFL draft style (no lottery),” Perticone tweeted Tuesday morning. This tweet was included in The Guardian’s explanation “on how those impeachment managers will be selected.”

Perticone tweeted out the blunder and The Guardian then issued a clarification, keeping his tweet in the article. (RELATED: Sen. McConnell Says Pelosi’s Impeachment Strategy Achieved ‘Absolutely Nothing’)

“This is a joke, by the way,” the outlet’s updated article now reads underneath Perticone’s tweet.

Following this was a serious tweet from Politico’s Jake Sherman. The Guardian noted that “This is not a joke” ahead of it in the updated article.

The House debate on transmitting the impeachment articles will be short. 5 minutes each side. Procedural hurdle was cleared last year

The Guardian sent a screenshot of its updated version in an email and told the Daily Caller that it “does not believe this tweet.” 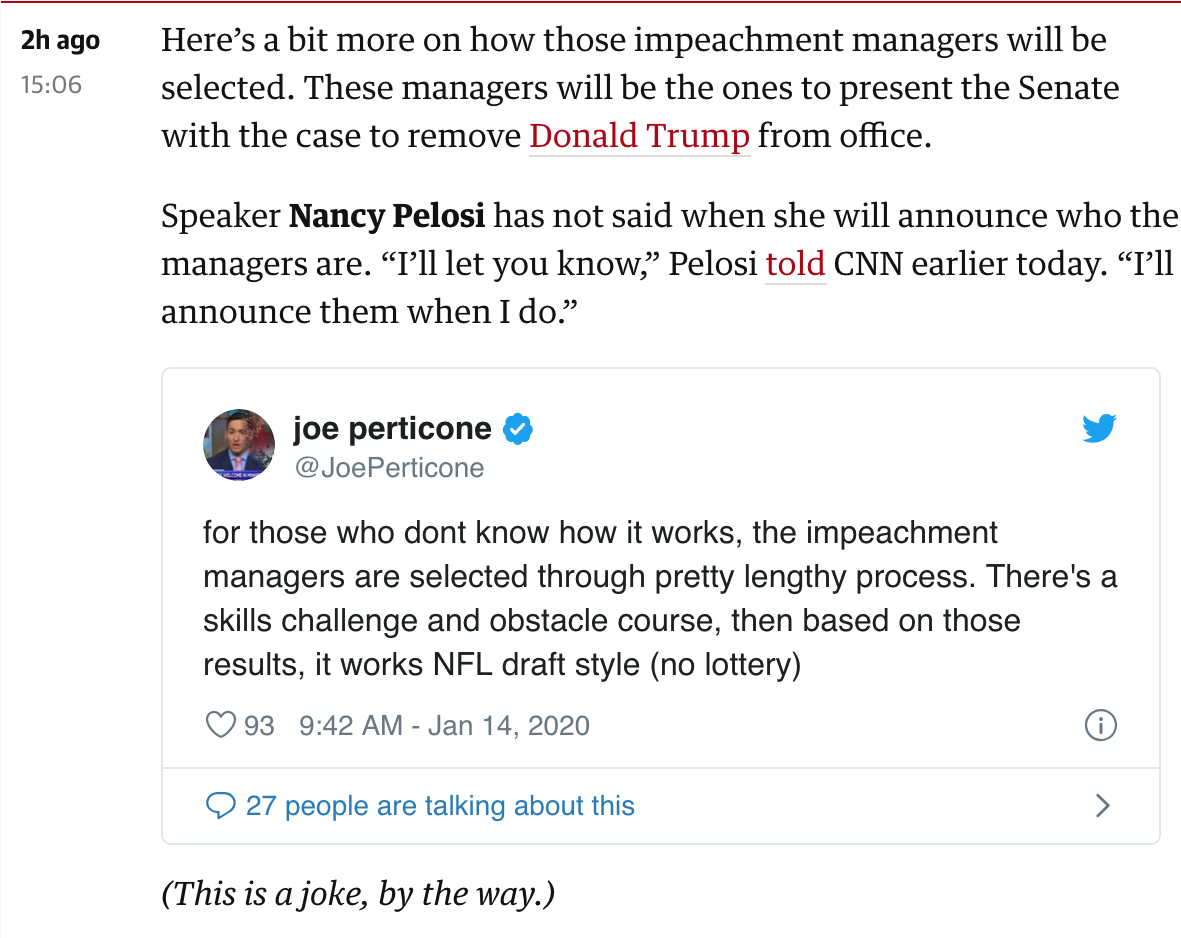 Perticone clarified on Twitter that his comment was a joke and there is no obstacle course involved in selecting impeachment managers.

“I guess I need to note that I’m no longer a Capitol Hill reporter and therefore all my tweets are nonsense that I make for my own amusement,” Perticone tweeted. “There is not an obstacle course involved in the selection of impeachment managers.”