President Donald Trump’s campaign is ramping up attention to Catholic voters heading into the 2020 election season.

The president has focused significant attention on Evangelical voters but now recognizes that he must devote similar attention to Catholic voters if he wishes to secure the 2020 presidential election, Politico reports. Many members of Trump’s staff are Catholics, including acting White House chief of staff Mick Mulvaney, Attorney General William Barr, and White House counsel Pat Cipollone.

“Catholics were of secondary importance to the Trump campaign in 2016, behind evangelicals. That hasn’t changed, but there is at least an effort to reach this community now,” former Republican Kansas Rep. Tim Huelskamp told Politico. Huelskamp now acts as a senior political adviser for CatholicVote.org and attended the December White House briefing for Catholics.

The campaign is preparing to launch a “Catholics for Trump” coalition, and Trump will reportedly be speaking at the National Catholic Prayer Breakfast in March, where Mulvaney said last year that Catholicism was driving policy in the Trump administration.

The president will also speak at the March for Life at the end of January, the largest annual gathering of thousands of pro-life activists and a rallying point for Catholic parishes across the United States. (RELATED: Here’s Why Authors, Theologians Think Pope Francis Cooperates With The Chinese Government Despite Persecution Of Christians) 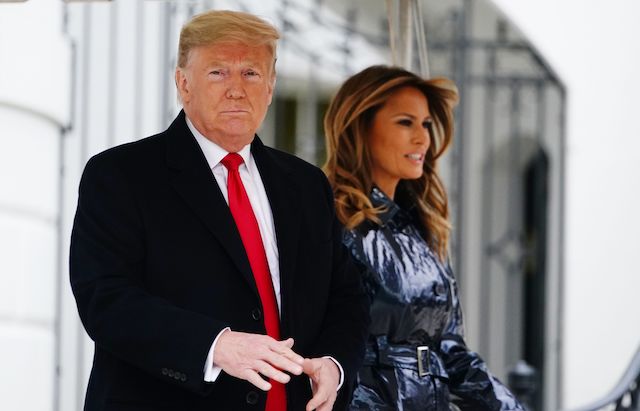 US President Donald Trump and First Lady Melania Trump make their way to board Marine One before departing from the South Lawn of the White House in Washington, DC on January 13, 2020. (Photo by MANDEL NGAN/AFP via Getty Images)

A senior Trump campaign official said the campaign’s outreach to Catholics will lean on the Knights of Columbus, a Catholic international fraternal organization.

“We plan to work a lot with the Knights and all sorts of groups around town and around the country in a real push to find voters who are Catholic and are engaged and want to get involved in our field program,” the senior official told Politico. (RELATED: More Than Half Of Catholics Are Open To Reelecting Trump, Poll Shows)

The official also said  the number of Catholics in the U.S. “is too big a group to not engage with.”

The Knights of Columbus noted that their organization is “non-partisan” following Politico’s publication of this senior official’s coments.

“The Knights of Columbus is a non-partisan organization that does not endorse or campaign for any political candidates though our members in their individual capacities are free to engage in political activity,” a Knights of Columbus spokesman told the Daily Caller News Foundation in a statement. “We encourage our members to be active, patriotic citizens and to vote. As an organization, we also engage in advocacy on certain policy matters.”

Two White House officials who spoke on condition of anonymity to Politico said that they believe Trump can win over older Catholic voters, particularly those who go to Mass at least once a week or are conservative-leaning.

Trump’s best shot at gaining the Catholic vote is through hammering his policy on topics like abortion and immigration, other officials told the publication.

“Catholic voters, like all other voters, have opinions on issues of immigration and trade, and the more people we have engaging in conversations about the president’s record, the better,” a senior Trump campaign official said.

The Trump campaign did not respond to a request for comment from the Daily Caller News Foundation.