The Patrick Mahomes-lead Chiefs’ surprising comeback from behind win Sunday at Arrowhead Stadium scored 35.396 million viewers, which was an increase of 21 percent over last year’s playoff’s game between the New England Patriots and the San Diego Chargers, according to the Kansas City Star in a piece published Wednesday. 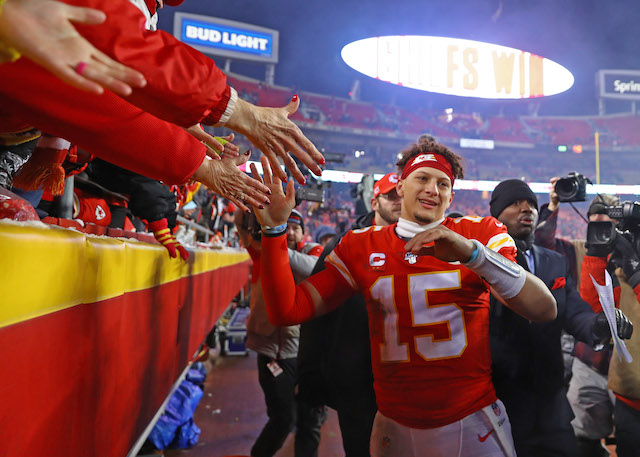 Not only did the Chiefs overcame a 24-point second-quarter deficit to beat the Texans, the game also saw an increase of 19 percent in the ratings from the Patriot’s game, with a 20.3/44 average national household rating/share. (RELATED: David Hookstead Is The True King In The North When It Comes To College Football)

The peak audience viewership for the AFC battle between the two teams hit between 4:45 p.m. to 5 p.m., with the network scoring 41.063 million viewers in the time slot on Sunday.

This was not only a win for CBS, but the NFL as well, which overall saw the ratings in 2019 increase by 4 percent from the games in 2018. (RELATED: Here’s A Glorious Video Of Matthew Stafford Throwing 56 Touchdowns To Calvin Johnson)

Crazy to think that there are only three games left in the 2019 season, the NFC Title Game, the AFC Title Game, and the Superbowl. The fun kicks off Sunday at 3:05 p.m. ET on CBS when the Chiefs go against the Titans. Can hardly wait!