Ocasio-Cortez has in the past called dark money the “enemy to democracy,” saying groups that use it do so to “manipulate electorates” and silence grassroots candidates.

The group, Organize for Justice, is a 501(c)(4) nonprofit organization, meaning it can raise unlimited sums of money without having to disclose the identity of its donors to the public. Organize for Justice calls itself the “sister organization” of Justice Democrats, a PAC whose board Ocasio-Cortez served on throughout most of her pivotal 2018 primary campaign.

Dark money is used to manipulate electorates. It is the enemy to democracy. Period.

When politicians and corporations weaved their dark web of campaign finance, they created a ticking time bomb for foreign adversaries.

To make our democracy safer, we need to get big money OUT. https://t.co/OYX62jboZH

Organize for Justice plans on spending $500,000 on Facebook ads promoting news articles that highlight Biden and Buttigieg’s lack of progressive bonafides, according to HuffPost.

The dark money group has already spent about $20,000 on about 40 Facebook ads, all of which were run on a month-old page called “Watercooler Politics,” Quartz reported. The ads targeted voters in the early caucus and primary states of Iowa, New Hampshire and South Carolina.

“We need leaders who can connect with diverse communities and work for ordinary people, not big donors, to take on the big challenges we’re facing,” states one of the Organize for Justice ads linking to an article titled, “Why 2020 Won’t Be Won By Centrists.” 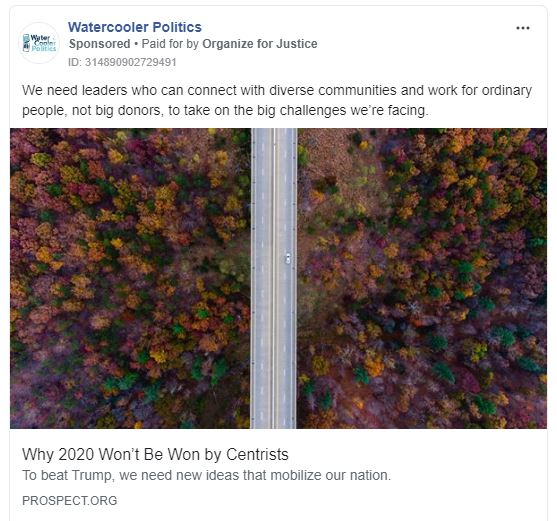 Organize for Justice spokesman Waleed Shahid did not respond to the Daily Caller News Foundation when asked if the group planned on releasing the identity the contributors funding its digital ad blitz.

Ocasio-Cortez did not immediately return a request for comment.

Ocasio-Cortez and her then-campaign chair Saikat Chakrabarti served on the three-member board of Justice Democrats PAC while it simultaneously supported her primary campaign in 2018.

But Ocasio-Cortez never disclosed to the Federal Election Commission that she controlled the political action committee during her campaign.

Multiple former FEC commissioners previously told the DCNF that Ocasio-Cortez’s unreported affiliation with Justice Democrats during her 2018 primary campaign could land her in legal trouble. (RELATED: Ocasio-Cortez And Her Chief Of Staff ‘Could Be Facing Jail Time’ If Their Control Over PAC Was Intentionally Hidden, Former FEC Commissioner Says)

Ocasio-Cortez acknowledged in August 2019 that she was “in conversation” with the FEC over the complaints, saying she was in “total compliance” with the law while dismissing the measures as a “form of legal trolling” from “fringe, Republican groups.” (RELATED: Left-Wing Groups Reject Bipartisan Plea For Fully Functional FEC Before 2020 Elections)

However, the FEC is currently unable to take any official action to enforce campaign finance laws as it has had only three active commissioners on its six-member board since the end of August 2019.