The recent escalation of tensions between the U.S. and Iran has some asking if outright war between the two countries is inevitable. If war were to occur, the U.S. has a significant advantage in terms of weaponry. Here are a few of the platforms and tools that could be deployed if the need arises.

One of the largest serving platforms in the U.S. Military, the bomber has been in constant service since 1955, this platform would probably be used as air support once Iran’s surface-to-air capabilities had been knocked out.

The B-52 can fly at 50,000 feet (for comparison, airliner flights fly at the mid 30,000s) and has a range of 8,800 miles. It is also capable of mid-air refueling, thus potentially extending its range to as far as the crew can endure. It has a payload of up to 70,000 pounds of armaments, which can include anything from ocean mines, conventional bombs, air-launched cruise missiles, or even nuclear weapons. The B-52 has seen extensive combat service during its lifetime, serving in the Vietnam war, the Gulf Wars, as well as Afghanistan. 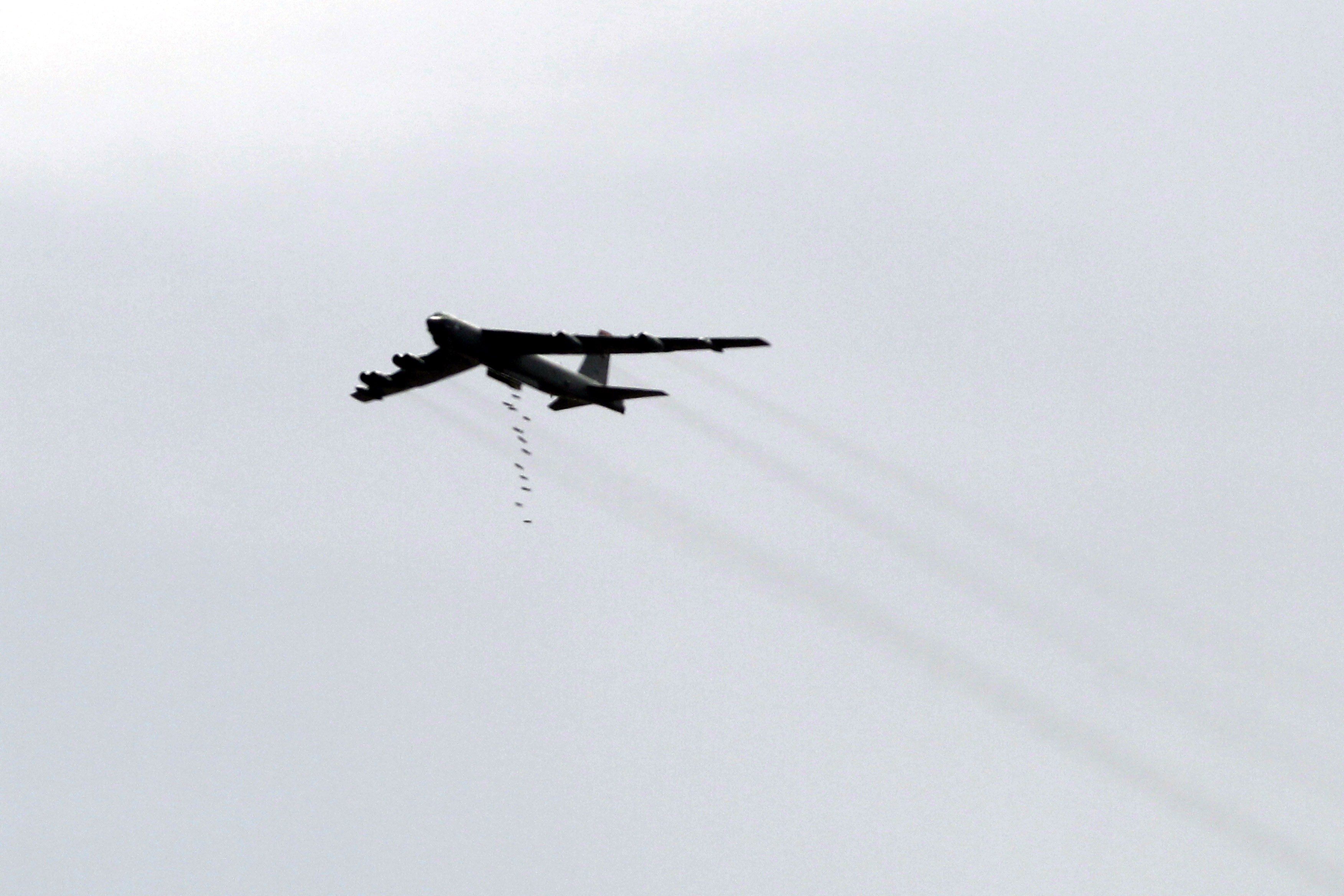 A US strategic bomber B-52 takes part in joint Jordan-US maneuvers during the “Eager Lion” military exercises, in Mudawwara, near the border with Saudi Arabia, some 280 kilometres south of the Jordanian capital, Amman, on May 18, 2015.  AFP PHOTO / KHALIL MAZRAAWI

The Tomahawk is one of the most versatile weapons the military has at its disposal, and it has been widely deployed for a variety of missions. In fact, it has been used in combat over 2,300 times since it entered service, most recently when President Donald Trump launched 66 of them into Shayrat Airbase in Syria.

This cruise missile can be launched from surface ships, or from submarines and is capable of striking moving targets. It was designed to fly at hypersonic speeds while at low altitudes in order to avoid radar detection. The Tomahawk can be set to fly at on a programmed path, but should the need arise, it can be reprogrammed and guided mid-flight to a new target. 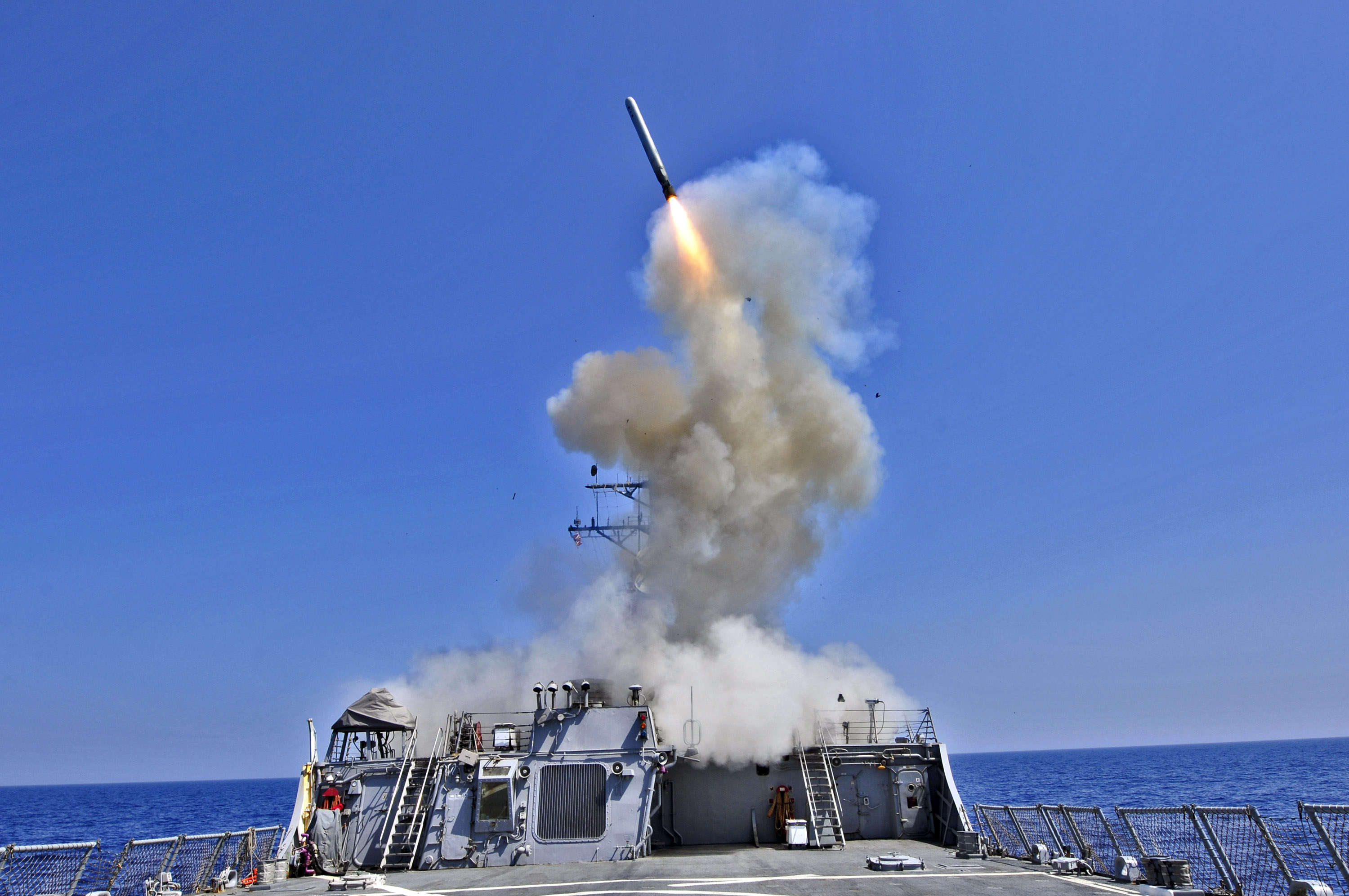 AT SEA – MARCH 29, 2011: In this handout released by the U.S. Navy, the U.S. Navy guided-missile destroyer USS Barry (DDG 52) launches a Tomahawk cruise missile in support of Operation Odyssey Dawn March 29, 2011 from the Mediterranean Sea..  (Photo by U.S. Navy via Getty Images)

The main aircraft carrier in the U.S. Navy’s fleet and the backbone of any large-scale military operation, the Nimitz class has been in service since the mid 1970s. These vessels would potentially be used extensively in a war against Iran, as they would allow the U.S. to launch both fighters and bombers from out of range of Iran’s defenses.

A Nimitz class aircraft carrier is essentially a floating city with each one having over 6,000 personnel onboard. It can carry approximately 60 aircraft and is also armed with a variety of missiles and phalanx mini guns.

These ships have not only participated in almost every major conflict since 1975, they have also been extensively used to provide humanitarian relief, delivering water and supplies to places such as Indonesia after the 2004 tsunami. 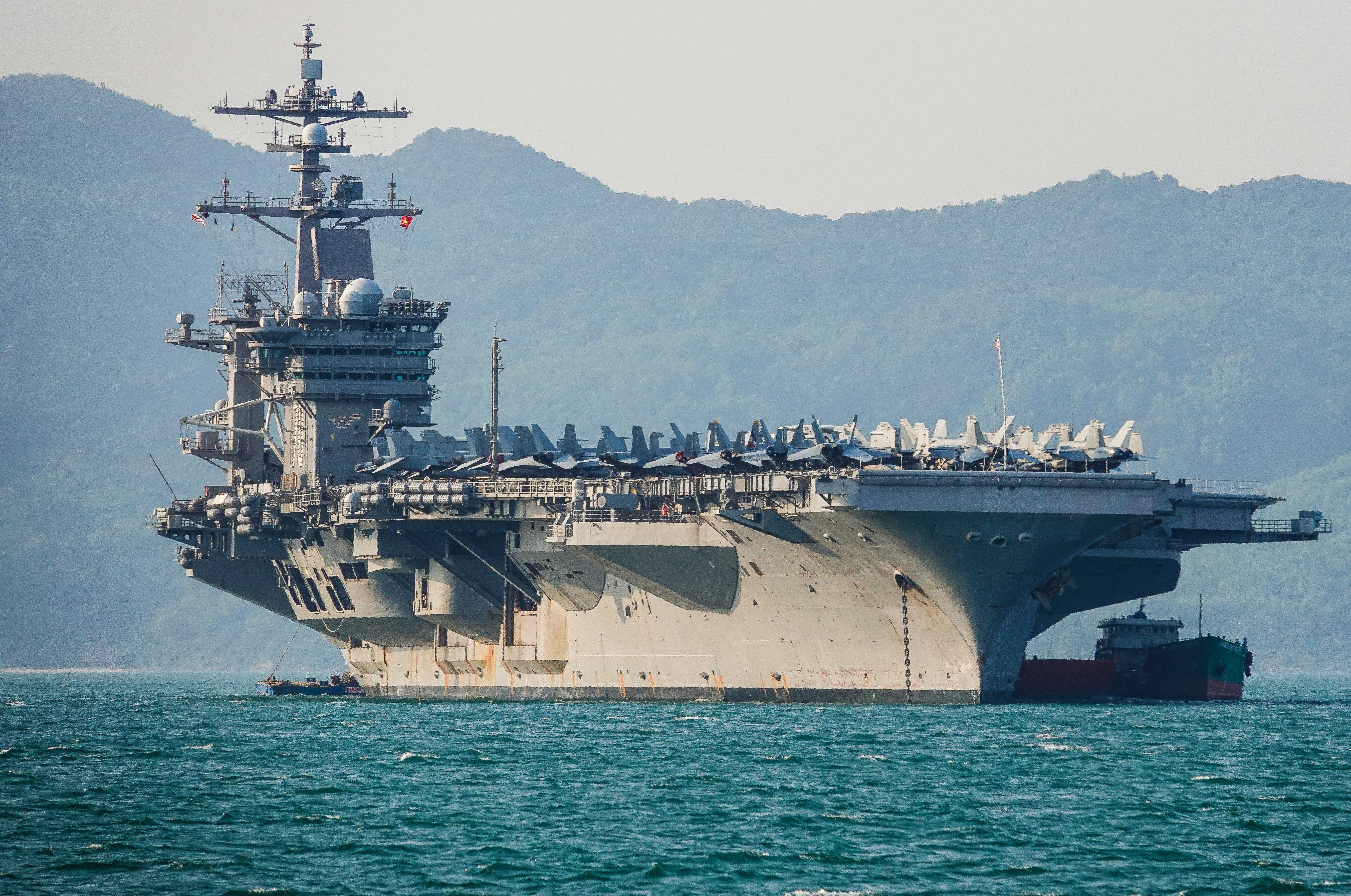 DANANG, VIETNAM – MARCH 5: The United States aircraft carrier, USS Carl Vinson, anchored off the coast at Tien Sa Port on March 5, 2018 in Danang, Vietnam. A United States aircraft carrier, USS Carl Vinson, made a historic visit to Vietnam on Monday in the central city of Danang, marking the biggest U.S. military presence in Vietnam since the end of the Vietnam War in 1975.  (Photo by Getty Images/Getty Images)

The Raptor was developed as a replacement for the F-14 and is the U.S. Air Force’s first 5th-generation fighter and its premier air superiority platform. Outside of potential surface-to-air missiles, Iran does not have a fighter that approaches the level of sophistication found in an F-22. While incredibly expensive, with a unit cost of 150 million, the Raptor has capabilities that other current fighters can’t match, such as a “characteristic known as supercruise,” which “allows the F-22 to cruise at supersonic airspeeds (greater than 1.5 Mach) without using afterburner,” a significant tactical advantage.

The F-22 can carry of variety of weapons, as it has an internal bay that can accommodate either missile launchers, or bombs, depending on the mission, it also has four hardpoints on the wings that are rated to carry 5,000 pounds. 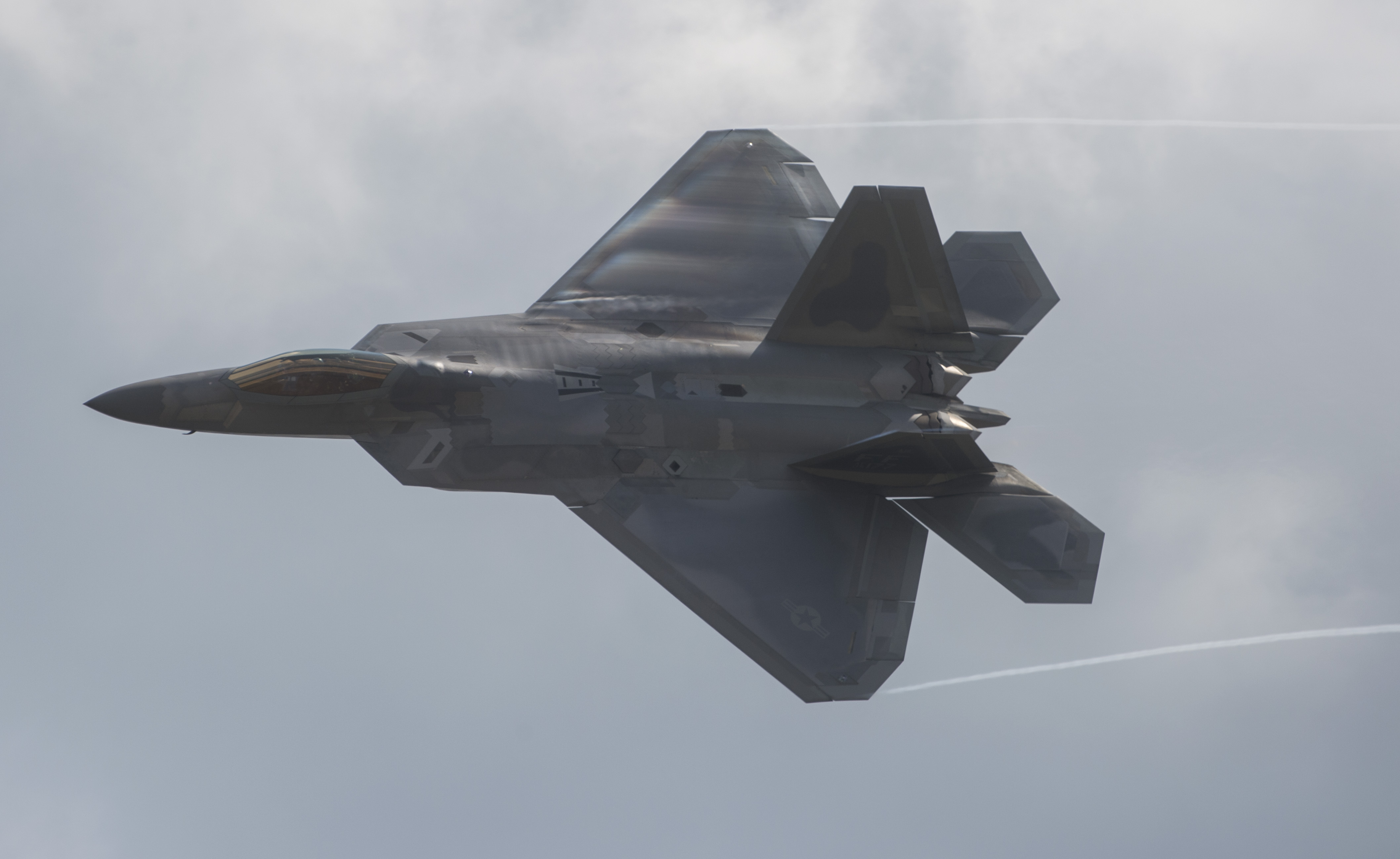 An F-22 Raptor does a fly-by during the airshow at Joint Andrews Air Base in Maryland on September 16, 2017. / AFP PHOTO / Andrew CABALLERO-REYNOLDS (Photo credit should read ANDREW CABALLERO-REYNOLDS/AFP via Getty Images)

The U.S. has approximately 5,000 of these tanks in service. Developed in the early ’70s, this is one of the heaviest tanks to ever see the battlefield weighing in at over 68 tons. It has a max speed of 42 mph and has a crew of four.

The Abrams boasts a 120mm smoothbore cannon, and three machine guns with an optional fourth. The main gun is capable of firing a variety of rounds, including armor penetrating rounds, anti-personnel rounds, or high explosive rounds.

This tank has been battle-proven in multiple middle eastern conflicts such as the Persian Gulf War and the Iraq and Afghanistan conflicts. 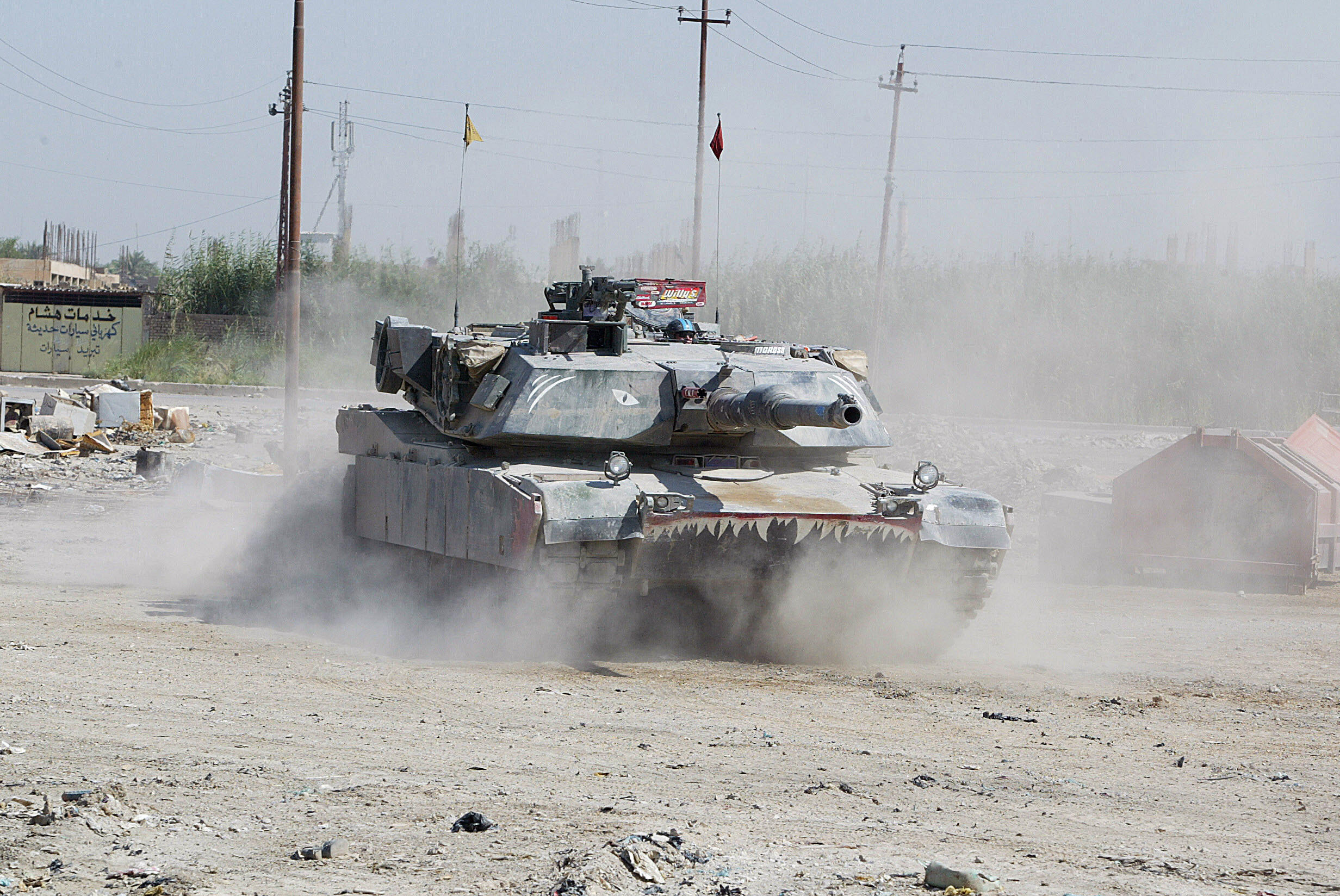 A US Army Abrams tank guards a meeting between Sunni and Shiite tribe leaders and clerics in al-Duwanem, southwest of Baghdad, 25 September 2007. The aim of the meeting is to bring back life to the town after it was cleared from al-Qaeda. AFP PHOTO/AHMAD AL-RUBAYE (Photo credit should read AHMAD AL-RUBAYE/AFP via Getty Images)

In a potential conflict with Iran, the U.S. would outmatch them across the board in terms of military technology and capability. Whether it’s on land, sea, or air, Iran’s chances would be slim as these are just several of many, many options that could be deployed.