Mason Thibault Mason is a native of Fall River, Massachusetts, an avid NFL and NCAA fan, and a commerce writer for the Daily Caller
January 22, 2020 3:47 PM ET
Font Size:

It seems like just about every week now, there’s some sort of challenge for lawfully abiding gun owners. Both Democratic and Republican politicians alike are perfectly comfortable with selling out your constitutional freedom in the name of vague threats, and for the purpose of  big government control. While various institutions are fighting against this on both a policy and cultural level (I am personally a big fan of the Second Amendment Institute), the challenges to gun owners remain.

How Bad Is Quickly Becoming Worst

Yet, while unconstitutionally limiting gun ownership is bad enough, career politicians like Beto O’ Rourke have introduced a new and more urgent threat to the gun-owning Americans who hold the constitution dear: demanding Americans surrender their firearms at the risk of arrest…and if that doesn’t work, then show up at registered gun owners’ homes, and forcibly seize the guns.

As horrifying as the idea is for both law enforcement and civilian gun owners, it’s not actually a new idea. Indeed, when Adolf Hitler took power of the Third Reich, attempting to create his despicable ethnic state through the reprehensible means of genocide, one of his first orders of business was forcibly seizing the firearms of ethnically Jewish Germans, arguing that “the most foolish mistake we could possibly make would be to allow the subject races to possess arms.”

Compare that quote to Beto O’ Rourke’s famous quip that “Hell Yes, We are going to take your AR-15”, and forcing citizens to surrender their firearms or face prison or even death- may not be a new idea-…but the support such a statement and proposal has received among the media and mainstream Democratic voters is alarming to say the least.

That’s why some gun owners have agreed on a clear response to the threat of being forced to give up their firearms they legally purchased-property they rightfully view as not only a tool of defense for their home and livelihoods, but also the constitutionally MANDATED defense against government tyranny- the same conceived tyranny that politicians like Beto and Julian Castro want to perpetrate and the same tyranny that our founders wrote the Second Amendment specifically to protect us against.

You Want Our Guns? Come And Take It!

“Perhaps if government officials realize the loss of life (since they aren’t concerned about loss of freedom) that would reluctantly accompany gun seizure on both the side of law enforcement and law-abiding Americans as a result of confrontation and conflict,….they will think twice about trying to take away the firearms of over 100 million Americans.”

In light of this goal, various pro-gun organizations and companies have begun to sell “Come And Take It” shirts,sweatshirts, hoodies, and more.

While there are a variety of different versions and color schemes for this “constitutional apparel”, one of our sponsors – Cavalry Apparel – has modernized the shirt and slogan based on the uptick in dangerous gun control arguments (i.e Beto and his supporters) that emerged last year. 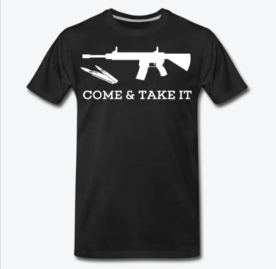 Regardless of whether you get your shirt from Cavalry or from somewhere else, spreading the message that gun owners won’t just give up and surrender their firearms as easily as government officials seem to think, may be one of the most effective ways in dissuading further government overreach (and possibly tyranny) through gun control.

The Daily Caller is devoted to showing you things that you’ll like or find interesting. This is a Sponsored Post. We do have partnerships with affiliates, so The Daily Caller may get a small share of the revenue from any purchase.