Republican New York Rep. Tom Reed arranged a Tuesday meeting with students at Binghamton University to discuss what Reed called the “restriction of free speech on campus” that took place at Binghamton during the fall 2019 semester, the Binghamton Press & Sun-Bulletin reported. The congressman’s visit followed a November confrontation between protesters and conservative university groups College Republicans and Turning Point USA.

Reed told those gathered Tuesday that he wanted to send a message that “we stand with them, that we stand with the constitution and that we are going to be a voice for them in dealing with the university, as well as universities across the country to say ‘you know what, we are proud Republicans, we are proud conservatives, and at the end of the day this is about having a dialogue in America where you can do it with civil discourse,” according to the Press & Sun-Bulletin.

After the meeting, the publication reported that Reed went with students for further discussion of campus censorship with Binghamton University President Harvey Stenger, who expressed gratitude that the congressman came to campus and that Stenger had the opportunity to “explain in person how we handled the events of last November.” (RELATED: ‘Be Prepared To Protect Yourself’: Texas Shooting Hero Jack Wilson Speaks Out)

“He left with a better understanding of what happened and appreciated my ability to explain to him the University’s response,” Stenger said in a statement, according to the Press & Sun-Bulletin. “In the current climate across the globe, where incivility erupts at a moment’s notice, we must promote a dialogue that is intellectual, civil and inclusive. Binghamton is a place where that can happen.”

Northeast Regional Manager for Turning Point USA Taylor Cisinski said that Stenger made a commitment to “do everything in the future to try and make sure the club can host successful events.”

Lizak explained to the DNCF that “the school and its student government have attempted to censor the College Republicans through sanctions such as taking away its right to book rooms and receive funding.”

“These are rights that groups who formed mobs to break our tables and rip our posters still enjoy this semester,” Lizak added. The College Republicans chapter president referred to a November incident where university police officers broke up a confrontation between protesters and the two conservative student groups.

The student also referred to an incident where the group College Progressives encouraged students to “fuck this and them” and to disrupt a College Republicans and TPUSA event hosting economist Arthur Laffer through an Instagram post.

“We can’t hold meetings and have lost funding from the [government-led student association],” Kestecher told the DCNF. “This stops us from holding events, inviting speakers onto campus and holding events which spread conservatism.”

Kestecher said that protesters have screamed in conservative students’ faces, threatened them, shoved her and ripped her “Make America Great Again” hat from her head. She calls these “all intimidation tactics to stop our ideologies from being expressed on campus.”

“Speaking for myself, I have solely faced censorship from the leftists who use vulgar language to stop our tabling events along and avoid debate,” the student said. “Throughout the protests on our campus, I was yelled at and told that the protestors always ‘pack it up’ whenever they see views like mine which are unheard of by them.”

“I’ve also repeatedly been told by leftists that Turning Point will never be chartered by my university or allowed to table again,” she added. 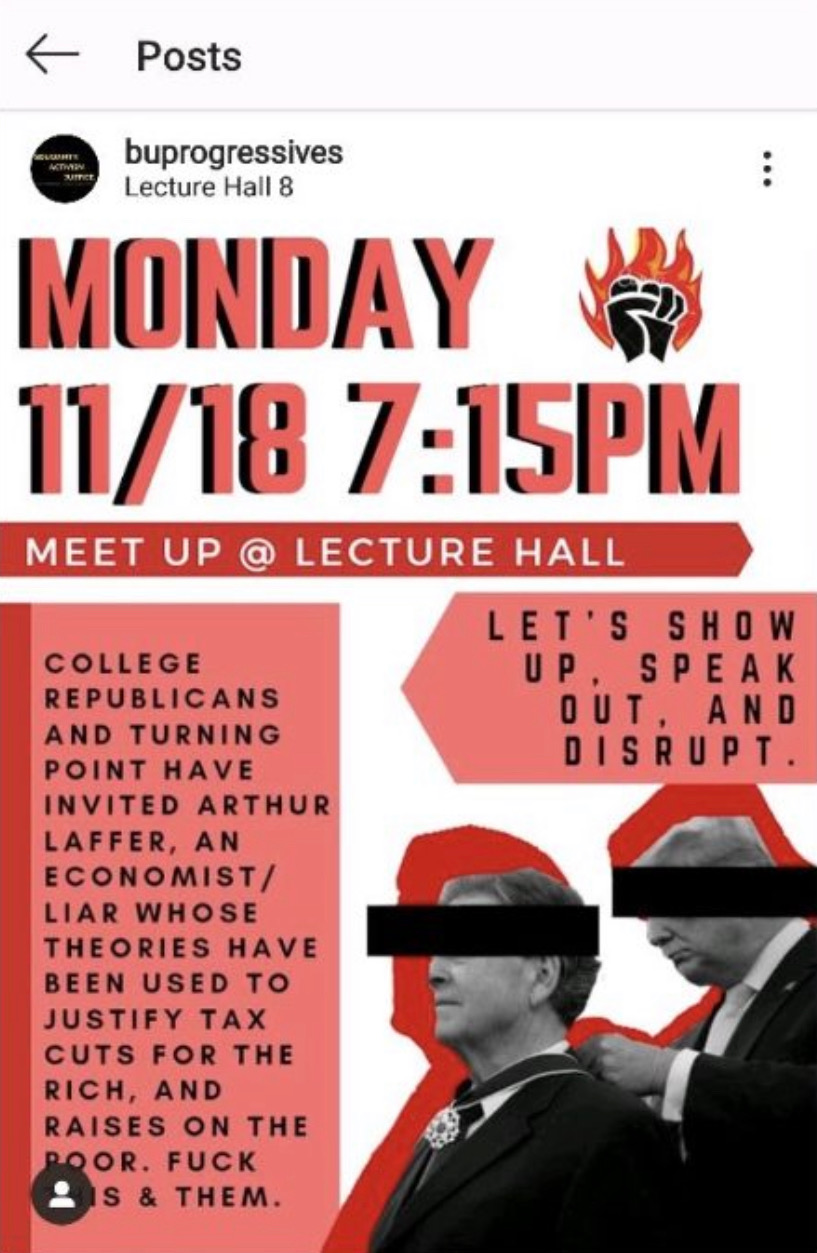 “The President agreed that many things went horribly wrong back in November that should be made right in the future and said he wants to work with our organization when we do similar events to our Arthur Laffer event,” Lizak said in a statement.

Though the meeting was productive, Lizak said, it is only the beginning of a “much larger conversation about the promotion of free speech.”

Binghamton University did not respond to the DCNF’s request for comment.