Record-shattering numbers of Republican women are running for office under President Donald Trump, saying that they believe their voices are not being represented and that they must stand up to Democratic socialism.

Two hundred women, 164 minorities, and 214 veterans have filed to run as Republicans in 2020 House races – and Pack says they expect more to file in states where filing is still open.

“Chairman Tom Emmer has placed a strong emphasis on recruiting a diverse slate of candidates that reflects the Republican Party at the grassroots level,” Pack explained. “These candidates see the extreme socialist agenda of the Democrat Party and are stepping up to the plate to do something about it.”

Record numbers of Republican women are running for office in the Trump era because they “recognize that President Trump’s policies are working for them,” Trump campaign deputy press secretary Sarah Matthews told the Daily Caller News Foundation. (RELATED: Muslim Refugee Journalist Challenges Ilhan Omar’s Congressional Seat: ‘She Does Not Speak For Me’)

“Affordable healthcare, support for paid family leave, more jobs, and safer communities, those are all women’s issues and that’s why President Trump and Republican candidates across the country will win big with women in 2020,” she said.

Her words are echoed by the Republican women running for office.

Claire Chase, who is seeking the nomination for New Mexico’s 2nd Congressional District, says that Republican women are running for Congress this year because Americans are “sick and tired of Democrats hammering the president despite his pro-woman record.”

“A hallmark of the Trump Presidency has been hiring and elevating Republican women to the highest levels of government,” she told the DCNF.

“I’m running to help President Trump take on the establishment, secure our southern border, and protect life. Thanks to President Trump, female unemployment is at a 50 year low, female wages are rising, and we saw the child tax credit double.”

Michele Nix, who is campaigning for the House in North Carolina’s 1st Congressional District, says that Republican women are running to make their voices heard.

“We’re tired of politics as usual,” she says. “Our voices are not being heard.”

Nix faces a tough race against Democratic Congressman G.K. Butterfield for North Carolina’s District 1, a district that has been held by a Democrat since 1883 – more than 100 years.

But a new analysis from the Washington Post has the race at D+3, which would mean that if a strong candidate wins the primary and faces Butterfield in the general election, a Republican could potentially win the district.

“I’m just like they are,” she adds. “An ordinary person trying to do extraordinary things.”

Nix grew up in a middle class family with strong military ties, a family that valued hard work and conservative principles. She struggled through hard times as a young mother with two children and was forced to live off government assistance for a period.

But Nix, determined to pull her family out of destitution, began working waiting tables and working odd jobs until she launched herself into a banking career.

After former President Barack Obama’s 2008 election, Nix said she realized she did not like where the United States was headed. She joined a local tea party group in the area and then became involved with the local Republican party.

“The county I live in is very small and we have more Democrats than we do Republicans,” she said. “So when I showed up for a meeting, they actually drafted me and put me on as a member at large to help out with the county party itself.”

Nix went from serving as a member of the Republican county party to becoming secretary, then treasurer, then vice chairman, and eventually chairwoman of the Lenoir County Republican Party. And since Lenoir County sat in three different congressional districts at the time, Nix got involved with these other district parties as well.

“I was really covering all of Eastern North Carolina,” she said. As she became more involved in the politics of these districts, Nix said she realized the need for someone like her to step up to the plate. She began engaging with people across the state, attending events, creating a Facebook account to engage with voters, and discussing her thoughts on politics with everyone she met.

“I have a rule that’s called my three-foot rule,” she explained. “Anyone within three feet of me gets to hear why I’m a Republican and why I think we’re the better party.”

Nix finally decided that she “had a story to tell” and stepped out onto the campaign trail. She has since been endorsed by Amy Kremer, co-founder of Women for Trump PAC and chair of Women for America First, as well as North Carolina state Sen. Bob Steinburg. 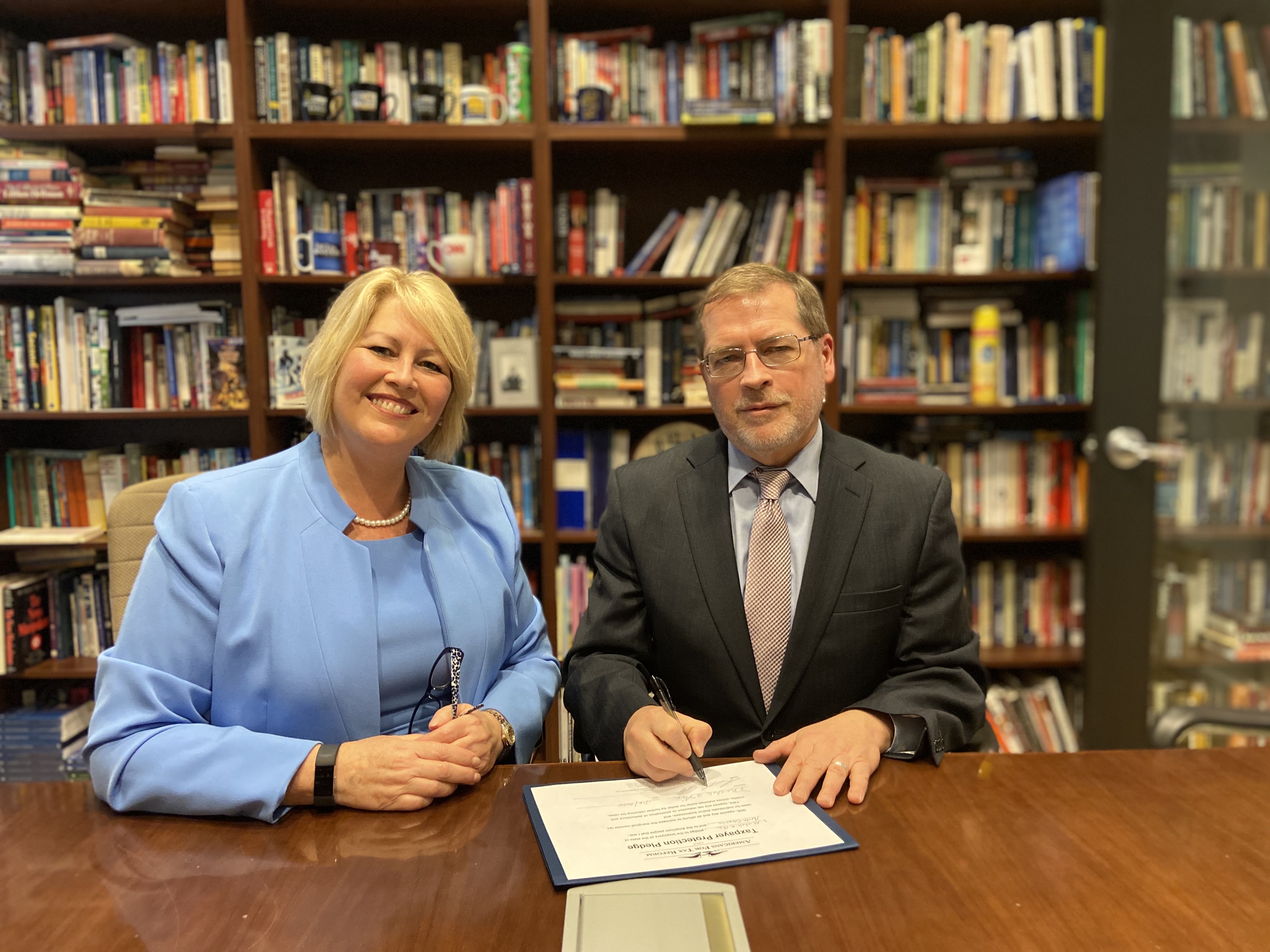 Michele Nix signs the Taxpayer Protection Pledge, becoming the first in her district to do so. She met with Grover Norquist, President of Americans for Tax Reform, while in DC to discuss tax reform in the district. Photo courtesy of Michele Nix.

Republican women value their male counterparts, Nix says, but there are some issues that require women’s attention. And the women currently in Congress “do not represent me,” she warns.

The candidate explains that she was one of the first Trump supporters in the state of North Carolina. Trump spoke as the featured speaker at a dinner Nix attended in January 2015 in South Carolina at a tea party coalition meeting. Nix turned to her husband and said, “You know, if Donald Trump gets the nomination, he’s gonna win.”

She met the future president at a December 2015 rally and “never looked back.”

“President Trump has no idea who I am, but he’s going to find out shortly,” she said with a laugh.

She promises to represent the “silent majority” who oppose socialism.

“Their voices are not being heard. They’re being drowned out by the Democrats and by the media, they’re pushing all this socialized medicine. They’re pushing government dependency from cradle to the grave,” she said.

“That’s not what America is about. And that’s not what we were founded upon. That is not the life, liberty and the pursuit of happiness for anyone.”