“All I can say is if administration officials are going to start giving journalists impromptu geography tests most of us are screwed.”

MOOD: “To the weirdos who keep DMing me just to say ‘hi’ and nothing else: Please stop. I’m not responding to that shit. Get to the point or get the fuck on. — Monique Judge,  news editor, The Root.

“Legitimately concerned for Congressman Adam Schiff’s safety after Trump essentially tweeted that he needs to be punished for helping lead the impeachment inquiry. This is a direct threat to a Member of Congress.” — Charlotte Clymer, publicist, Human Rights Campaign, transgender activist.

“Earlier today, while reporting on the tragic news of Kobe Bryant’s passing, I unfortunately stuttered on air, combining the names of the Knicks and the Lakers to say ‘Nakers.’ Please know I did not & would NEVER use a racist term. I apologize for the confusion this caused.” — Alison Morris, host, MSNBC. (RELATED: NYT Reporter Deletes N-Word Tweet)

“‘I spilled chicken water all over this desk,’ @byrdinator tells me right now as I wonder what chicken water is.” – Clare Foran, reporter, CNN politics. 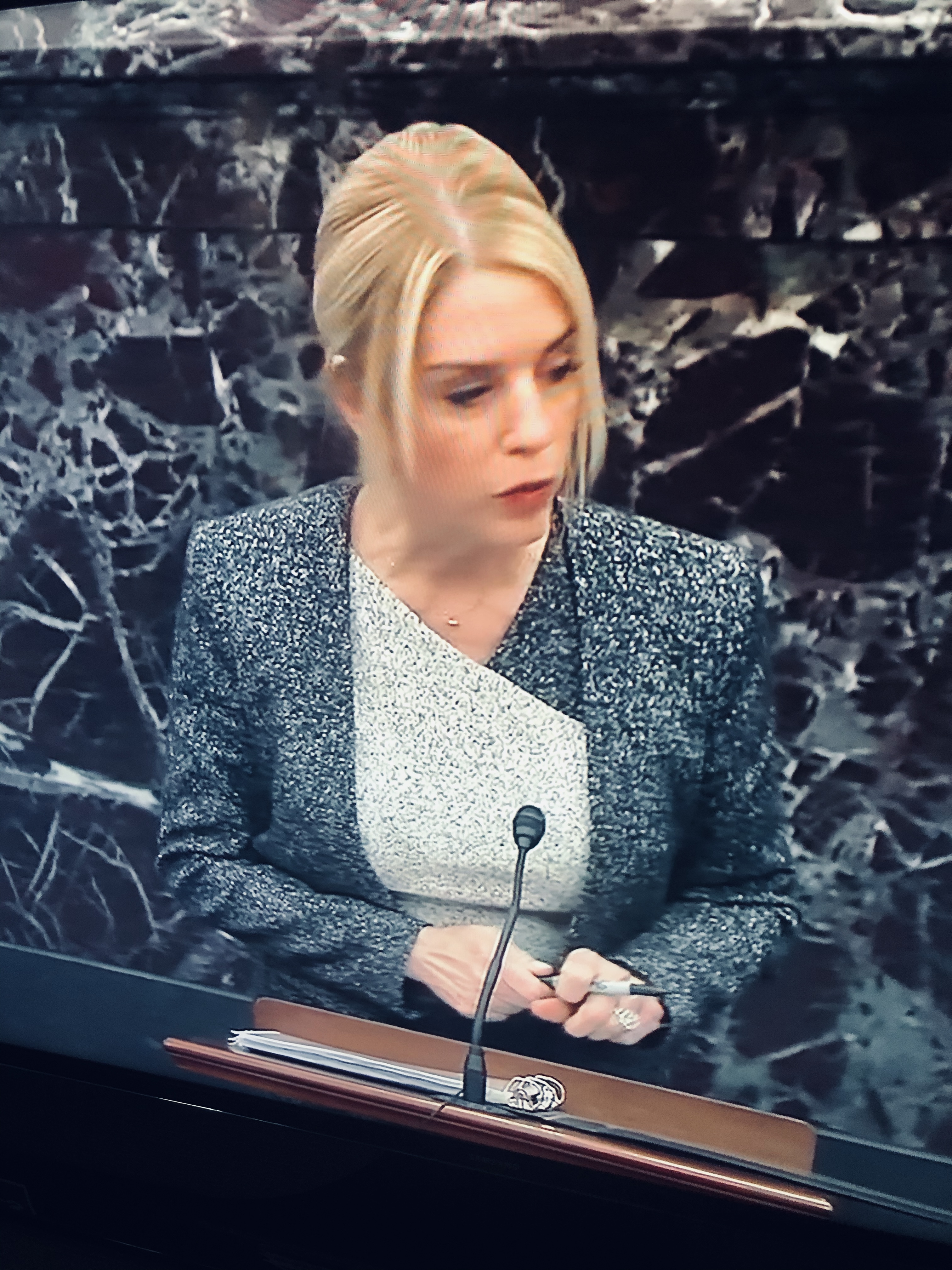 Journo’s dog chews up her headphones

“Go to the bathroom for a couple minutes. Left my wireless headphones on top of my laptop while they charged. Come back and Franklin chewed them. And now they’re not working. Needless to say… I’m pissed.” — Beth Baumann, associate editor, Townhall.

Cillizza turns Kobe’s death into moment with his daughter

“My 7 year old told me that at least Kobe and his daughter, Gianna, weren’t alone at the end — that they had each other. And yeah, that made me cry. What a beautiful sentiment.” — Chris Cilizza, CNN.

Nate Silver self-deprecates on his ability to consume news

“As someone who has sort of unintentionally become a low-to-medium information news consumer on impeachment because I’ve been 100% focused on the D primary, the Bolton news seems like a fairly big deal to me.” — Nate Silver, founder, 538.

He apparently forget to tell her that watching and shitting on Fox News was about the extent of his work life.

“My wedding vows with @AlyssaRosenberg included a clause for ‘in sickness and in health’ but not one for ‘even if he makes you watch Justice with Judge Jeanine,’ and folks, I’m getting nervous.” — Matthew Gertz, Media Matters, arm of the Democratic Party.

Alyssa Rosenberg, WaPo: “I baked him peanut butter sandwich cookies while this was going on because I am a SAINT. (Also that show is maybe the wildest thing I have ever watched and I am a professional critic.)”

“I have not threatened a baby. I have never threatened any babies. I don’t have alts, I don’t make secret death threats, I’m not involved in any conspiracies to threaten or harass anyone. I have had Sady Doyle blocked for years and just wish she would leave me alone.” — Elizabeth Bruenig, opinion writer, NYT.

“How people behave when their flight is delayed is who they truly are.” — Eden Dranger, LA-based comedian and writer.

“Need to apologize to my wife for the disgusting public allegations of my mother @KPapadopouloss. Also to @TomArnold for having been accused of such vulgarities. Despicable and shameful.” — George Papadopoulos, former aide, then-Donald Trump presidential campaign.

Simona Mangiante replied to her husband, “Thanks. Hope @Kpapadopouloss will have the decency to cease her public defamation. I feel for you my dear husband @GeorgePapa19. that she embarrassed your name. God bless her.” (Simona posted a screenshot of her mother-in-law’s tweet.) 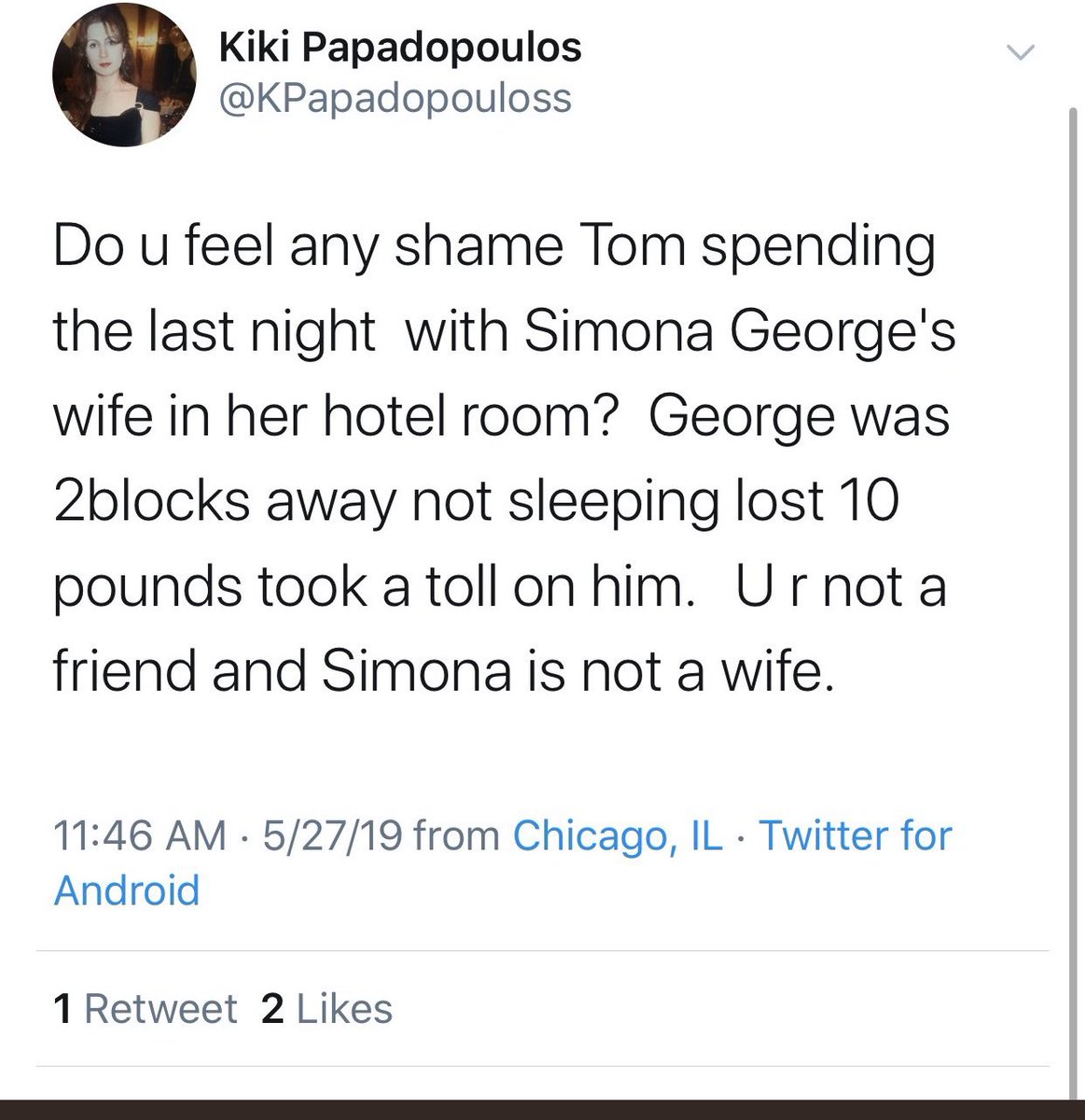 In 2017, Papadopoulos pleaded guilty for lying to the FBI. He spent 12 days in federal prison.

You can read about some of the family squabbling here. But to get a sense, no one from Papadopoulos’s family atttended the couple’s wedding in 2018, least of all, Kiki Papadopoulos‘s, George’s mother.

Number of bathrooms in the Kalorama home: 25.

John Stanton, writer, New Orleans, former D.C. Bureau Chief, BuzzFeed: “Rep. Don Young once called me a mother fucker, a cock sucker, and a son of a bitch for writing a column in Congress Daily making fun of his abject failure as a committee chairman.”

Matt Laslo, VICE, Playboy WIRED, The Daily Beast, NPR: “Last year, @RepLizCheney gently grabbed my arm and said, ‘You’re mean when you write for @thedailybeast.’ When I responded by asking if there was anything inaccurate in the piece, neither her or her chief of staff could point to an error.” Read his story here.

Micheline Maynard, Forbes: “The CFO of ⁦‪@GM‬⁩ once screamed in my face at a black tie event over a story, and then stomped off. It made me wonder what his staff went through.”

Lulu Garcia-Navarro: “I’ve been thinking a lot about what happens to journalists behind closed doors. The bullying from people like politicians (and others) who want us to do what they want. There is usually silence around these interactions. I’m glad people are getting a glimpse.”

About that WaPo reporter who was suspended during Kobe coverage

“I deleted a tweet about the WaPo suspending their reporter over Kobe Bryant tweets, I call foul and imply WaPo’s social media policy is bad. I was wrong. Ends up she was suspended for sharing a screenshot of her work inbox revealing the names of emailers.” — Dusty Giebel. (RELATED: WaPo Suspends Reporter After Series Of Tweets On Kobe Bryant’s Death)

Other reactions on WaPo‘s Felicia Sonmez…

Donald Trump Jr.: “You @washingtonpost reporters really can’t help yourselves, can you?”

Hayes Brown, BuzzFeed: “I’m sorry but I fail to see how placing @feliciasonmez on administrative leave for posting a reported news article about the 2003 accusations against Kobe is in any way fair. …It was a tweet with a link to the article with the headline of that article as the only text. No opinion about the accusations and the resulting settlement which really happened. So I’m curious to see how that “displayed poor judgment that undermined the work of her colleagues.”

David Klion, news editor, Jewish Currents, writer, The Nation: “This is especially troubling considering that a few months ago, Sonmez bravely went public with the details of her own sexual assault at the hands of a fellow journalist in China, and was smeared by the usual gang of unaccountable reactionary pundits for doing so.”

David French, The Dispatch: “Whenever people grieve, vile trolls emerge to tweet hateful things. Resist the urge to highlight them with a quote tweet. Let them spew their hatred into the void.”

One of Gigi Bryant‘s favorite players was LeBron James…. Here.

“I tried to be smart and thoughtful about Kobe Bryant, a man who dominated my life in sports. But it devolved into me crying onto my keyboard, and I have no idea if teardrops can type.”  —Bill Oram, The Athletic. Here.

Things Better Kept To Yourself

“Cash, age 3, during what may be our last shower together :)”

And it wasn’t everything he thought it was going to be cracked up to be.

“Went to an In N Out for the first time and like… what are you guys talking about? It was acceptable and that’s basically it. It was better than Five Guys or Shake Shack but if I never go again, I won’t miss it. #CaseDismissed. #CaseDmissed” — Eddie Scarry, commentary writer, Washington Examiner.

AWWWKARD: Living and working in the D.C. bubble

“Living in DC is a constant game of seeing people places that you know from the internet but don’t immediately recognize leading to awkwardness. That happened to me twice last night.” — Greg Price, social media, The Daily Caller.

Montel’s flack has issue with Geico

“After ~ 17 years – nearly my entire adult life as a ⁦‪@GEICO_Service‬⁩ customer, I’m sad to say I’m cancelling all my ⁦‪@GEICO‬⁩ policies at the end of the month. Turns out I can get better coverage for less money elsewhere and not get treated like a criminal over a 12k claim?” — Jonathan Franks, flack, Montel Williams.

Note to readers: I take issue with Frank’s use of the word ‘adult.’ He hardly ever acts like an adult on social media. I also wonder why we should care about his issues with Geico.