Ten to 20 years from now, we will not be talking about impeachment, and believe it or not, we won’t still be talking about Donald Trump either. We will be talking about our debt crisis. For all the good that came from this era, the Bush, Obama and Trump administrations will all be remembered as the ones that caused the crisis that will hammer our children and grandchildren. To understand where we are, it’s helpful to review the past few years of this issue’s development.

At the Bush White House, where I worked for eight years, we knew we had a long-term entitlement program spending problem coming down the track, but we thought of it as far off in the future. Unfortunately, the Bush administration was horrible about spending. For an administration that campaigned on limited government, we increased nondefense discretionary spending 8% a year during our first term. We also added even bigger increases to the defense side. We introduced a new entitlement for prescription drugs for all Americans instead of targeting it for the needy. 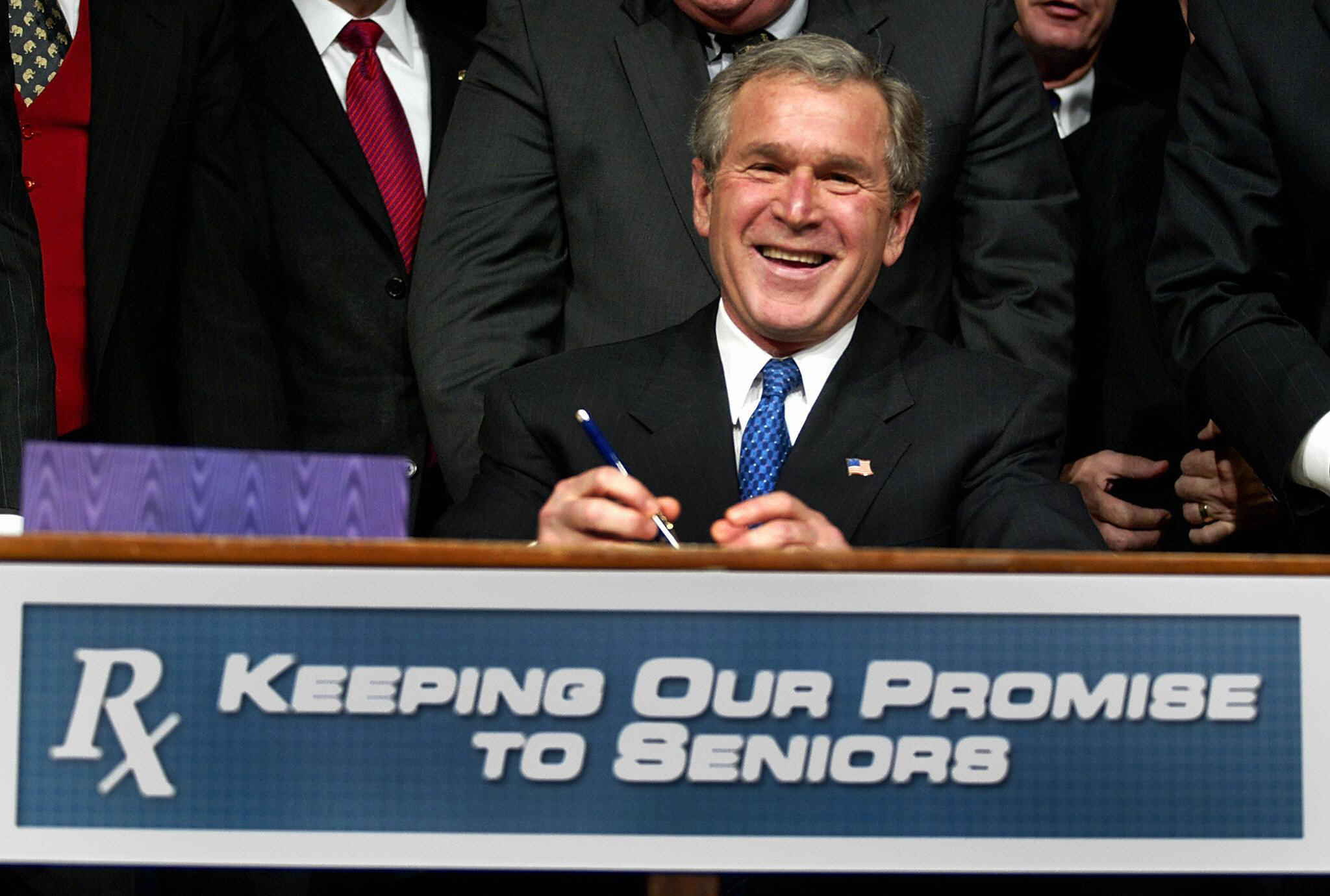 By the second term, the budget hawks were trying to put on the brakes, but with war spending and then Hurricane Katrina, we never really got discretionary spending under control. Finally, with the financial crisis, we stopped even trying. Throw in the booming entitlements, and we left a really bad legacy. To George Bush’s credit, he did expend a lot of political capital on Social Security reform. He jumped on this issue before the country was ready — and nothing got done.

In 2008, federal government spending neared an inflation-adjusted record of $28,388 per American household — the highest level since World War II — up from $21,891 per household in 2001. Sixty percent of all that new spending was in areas unrelated to defense and homeland security.

During the Obama years, with all the talk of stimulus, the spending just got worse. President Barack Obama ran historically massive trillion-dollar-plus deficits his first few years when he had a Democratic congressional majority. Republicans in Congress tried to fight this massive spending with limited success. Some Republicans also tried to raise the entitlement issue — again with no real success. The Obama years were notable as a time when most Republican voters and politicians seemed to really care about our spending and debt problem.

After screaming about spending for eight years of Obama, Republicans have been pretty silent about it during the Trump years. There has been no Republican discussion of entitlement reform, which makes things look more than a little partisan after all the shutdown fights over spending under Obama. Trump has taken the entitlement issue off the table completely, which makes sense politically since voters are not open to it, but from a policy perspective, we are getting closer and closer to the tipping point of a debt crisis. (RELATED: Senate Passes Massive Budget Expected To Raise Deficit By Nearly $2 Trillion) 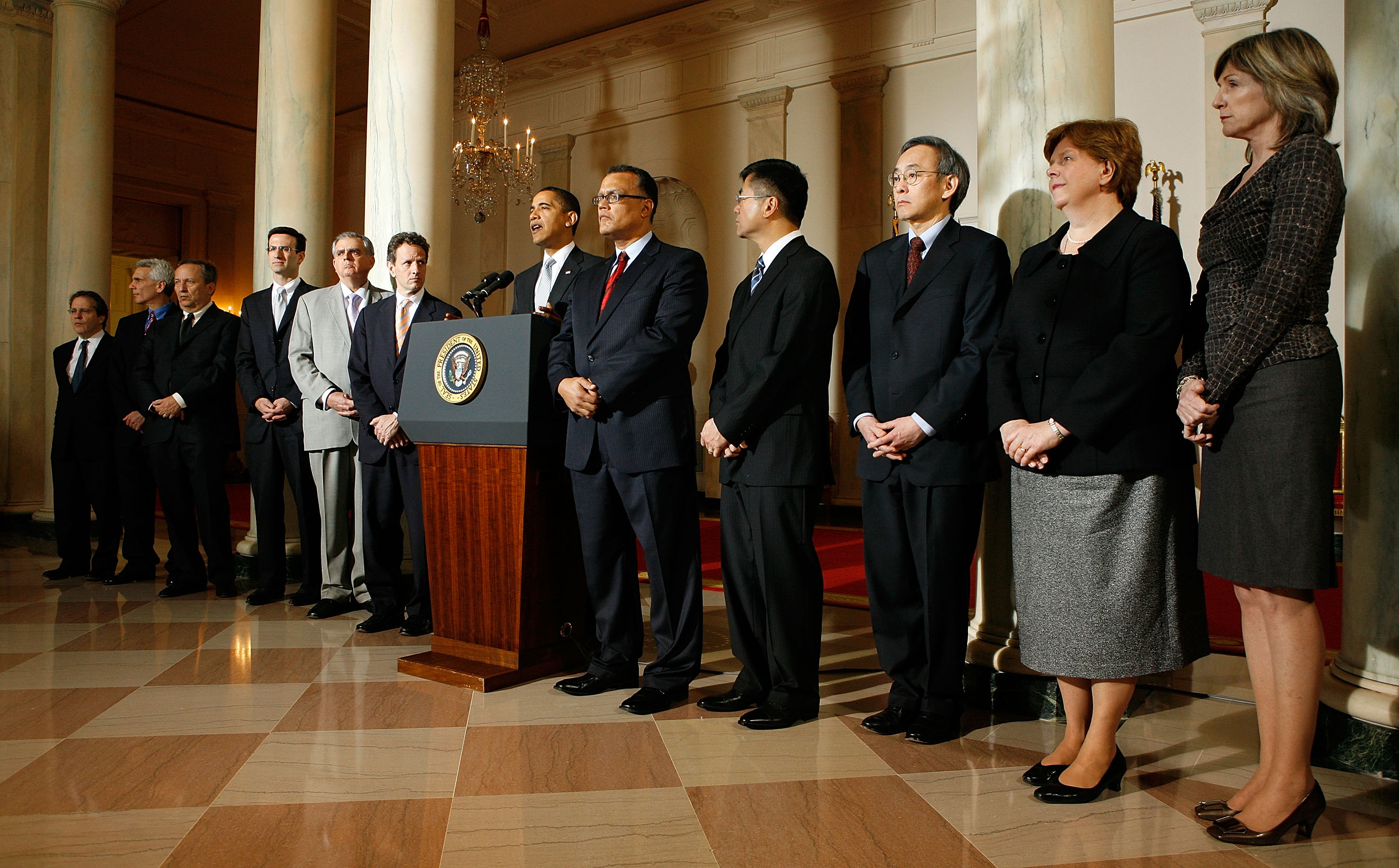 WASHINGTON – MARCH 30: U.S. President Barack Obama (C) makes an announcement at the Grand Foyer of the White House March 30, 2009 in Washington, DC. Obama unveiled the details of his administration’s plan on dealing with the auto industry crisis. He also named Montgomery to be the new director of Recovery for Auto Communities and Workers. (Photo by Alex Wong/Getty Images)

The presumption in Washington has always been that as we get closer to an entitlement-driven budget crisis, both parties would finally be motivated to tackle the problem. But we are now close. We are over 100% on our debt-to-GDP ratio, which is widely viewed as problem territory. This is when we always expected to make a deal. Do you see a deal on the horizon? The two parties can’t even get the most simple bills passed. Do you see any chance of fundamental entitlement and spending reform passing in the environment we have?

This year, we have strong economic growth, low unemployment and low interest rates — and we are still going to run a $1 trillion deficit. The Congressional Budget Office estimates that we will add over $12 trillion to our national debt over the next 10 years. This is all presuming a good economy. A recession would push it all up — maybe by a lot. So would a war. We are already at $15 trillion to $20 trillion of total federal debt, depending on whether we count intergovernmental debt. This comes out to $67,000 just in federal debt per person in America.

We are on pace for persistent trillion-dollar deficits going forward. If interest rates keep going up as widely as expected, our interest payments alone will balloon and displace other parts of our spending, or, more likely, just add to the deficit. That can result in a potential debt spiral as we have to pay higher rates to attract bondholders. (RELATED: Is Donald Trump To Blame For Our Ballooning Deficit?)

Most Democrats want to pretend our debt problem doesn’t exist or is easily fixable with minor entitlement program tweaks. None of that is true. Many Republican voters are equally uninterested in our debt, and they don’t want their benefits cut any more than Democrats do. Republican politicians have lost all credibility on spending discipline after spending like crazy under Bush and Trump and then screaming about spending under Obama. This means that when the debt crisis comes in 10 to 20 years, there will be plenty of blame to go around. This period from Bush to Trump will not be remembered for the Iraq War or impeachment — it will be remembered as the period where we sold our kids and grandkids down the river.