OLATHE, Kansas — The Kansas City Chiefs are locked in to win the Super Bowl if they battle as aggressively on Sunday as a trio of Senate candidates did for President Donald Trump’s support at the GOP debate in this Kansas City suburb Saturday.

Rep. Roger Marshall, former Kansas Secretary of State Kris Kobach and, to a lesser extent, Kansas Senate Leader Susan Wagle, touted their support for Trump on a host of issues during the hour-long debate.

They are vying to win the Republican primary race in hopes of filling a seat being vacated by Sen. Pat Roberts. The winner is likely to face Barbara Bollier, a Kansas state senator.

Marshall, who represents a district in western Kansas, began his introductory remarks by touting a voting record that is 98% in line with Trump’s. He also said Trump invited him to the signing of the U.S., Mexico and Canada trade agreement, and has thanked him for his support on agricultural issues and impeachment.

Kobach noted that he was one of the first Kansas officials to support Trump for president in 2016, while painting himself as an informal adviser to the commander-in-chief on immigration and voter fraud issues.

Kobach also revealed that he met with Trump and Jared Kushner on Monday to work on an immigration bill the White House hopes to put out in 2020. 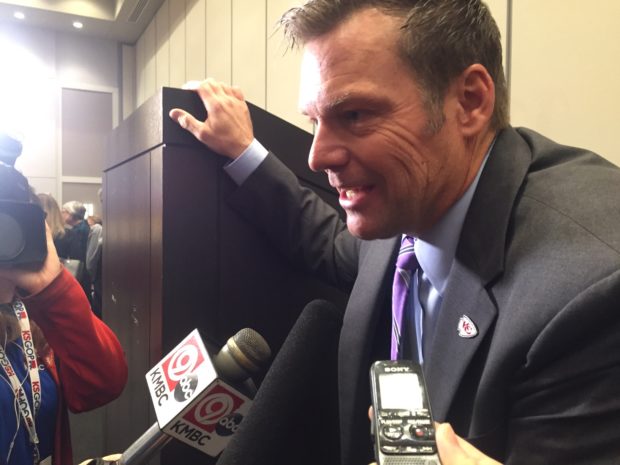 But while Kobach has a closer relationship with Trump, Republicans see him as a more vulnerable candidate for the general election because of his loss in the 2018 gubernatorial race to Democrat Laura Kelly. (RELATED: Democrat Upsets Trump Ally Kris Kobach For Kansas Governor)

Trump endorsed Kobach a day before the GOP primary in that race over then-Gov. Jeff Collyer. Kobach lost to Kelly by 5 points.

Kobach downplayed the effect his gubernatorial loss will have on Trump’s endorsement decision, noting that the Kansas governor’s seat frequently switches parties, while Republicans have won every Senate election since 1932.

“He understands that governor’s races are different than Senate races,” Kobach told reporters of Trump after the debate.

Kobach also rebuffed the argument of establishment Republicans that he poses a risk.

The National Republican Senatorial Committee blasted Kobach when he announced his Senate candidacy in July 2019, saying his entering the race puts the GOP’s Senate majority “at risk.”

“They know that I’ll win the general election,” Kobach said of the blowback from the GOP establishment.

“I think they’re more uncomfortable with having somebody in the Senate who’s not going to be brought into line whenever Senate leadership snaps its fingers,” he said.

“I’m sure I will vote with the Senate majority leader on a vast majority of things,” he added, referring to Mitch McConnell, “but when he’s abandoning our principles or giving up ground that we shouldn’t be giving up, I won’t do so.”

There is some evidence that Trump is leaning in favor of Marshall, who is considered the favorite of the GOP establishment.

The Kansas City Star reported Jan. 17 that two sources said Marshall was in the room with Trump when the president called Kobach to urge him to drop out of the race. The sources said Trump’s phone call went to Kobach’s voicemail.

Marshall did not address the report Saturday, but a source familiar with the phone call told the Daily Caller News Foundation that it occurred.

Neither candidate said in interviews with the DCNF after the debate that Trump’s endorsement is essential for a primary win, though they both hope to earn it.

“I feel like we’re leading the race already. We certainly hope we can get the president’s endorsement at some point in time,” said Marshall, adding that he recently spoke with Trump for an hour.

“I don’t want to go into the depths of that conversation,” said Marshall, “but we have a great relationship and I feel like he’s supporting us and helping us wherever he can.”

Kobach said he is unsure whether he will directly seek an endorsement from Trump.

“I talk to the president regularly,” Kobach told the DCNF in a post-debate interview. “I haven’t asked him for an endorsement yet. I don’t know if I will or not, but I will be talking to the president frequently, especially as this immigration bill starts to take shape.”

Asked about his White House visit earlier in January, Kobach said he has been working with a team directed by Kushner on an immigration proposal.

“I’ve been giving my help making suggestions, changes to the language, making sure we have everything in the bill that we need to have,” said Kobach, who worked with the White House in 2017 on a voter fraud initiative and was considered in 2019 for the role of immigration czar.

“He’s doing a great job leading the creation of that bill,” Kobach said of Kushner.