Superstar couple Beyonce and Jay Z dropped in on Sunday’s Super Bowl, but drew criticism when they chose to remain seated when the crowd stood for the national anthem.

I don’t give a damn whether Beyonce and Jay Z agree with the current administration. They should stand up for the men and women who are fighting each and every day for their ability to rake in millions from the American people. Absolutely pathetic! https://t.co/EzcMQOhs62

Beyoncé & Jay-Z (former crack dealer)sit for the national anthem because apparently the United States of America has oppressed them with millions upon millions of dollars & fans. Sounds rough. Maybe they should try another country that allows them a little more freedom & success?

Is anyone shocked that Beyonce and JayZ sat during the National Anthem?

You live in the greatest Country in the world! Your success is proof!

Get off your butt and STAND FOR THE ANTHEM!

The #JayZ #Beyonce clan sat down on the National Anthem. Real class. pic.twitter.com/HD5WySWd6u

Disappointing that Beyonce and Jay-Z Didn’t stand for the #NationalAnthem at the #SuperBowl despite #NFL partnership.

Both Beyonce and Jay Z have previous ties to the Super Bowl — Beyonce headlined the halftime shows in 2013 and 2016, and Jay Z reportedly turned down a deal to perform because he said the NFL had asked him to bring other high profile guests to perform as well.

Jay Z also took some heat for comments he made in defense of his own company’s partnership with the NFL amid the national anthem protests started by former 49er Colin Kaepernick. “I think we’ve moved past kneeling. I think it’s time for action,” he said.

Kaepernick appeared to mock Jay Z in his Instagram story, questioning his motives for sitting out the anthem. 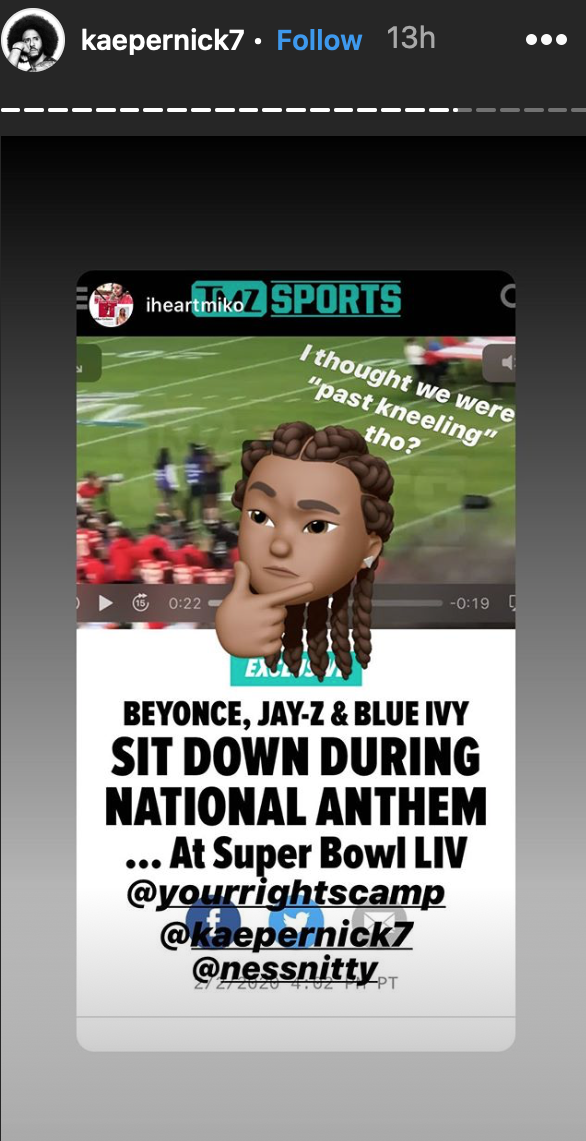 Anthem-singer Lovato, whose comeback from a near-fatal drug overdose had kept her in the headlines, drew high praise for her rendition of the “Star-Spangled Banner.”