But how close is close?

For more than fifty years, from 1957 to 2008, the publicly-held federal debt never exceeded 47.9 percent of gross domestic product.  Analysts projected a large and sustained increase in the debt relative to GDP, but lawmakers were comforted by the knowledge that the day of reckoning wouldn’t occur for years. Then came the Great Recession.

The recession brutalized the economy and, with years of debt compressed into mere months, the publicly-held federal debt rose to a level not seen since the late 1940’s. As of last year, the publicly-held debt had risen to 79.2 percent of GDP.

CBO projects the debt will explode from this already elevated level to an unprecedented level — nearly 200 percent of GDP — producing what could charitably be called “the debt curve from Hell.” 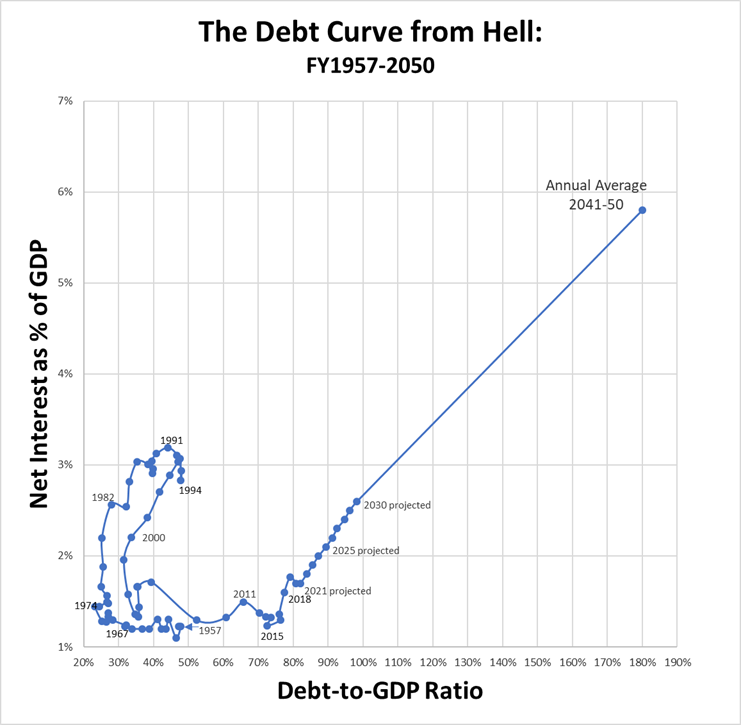 One saving grace of the Great Recession was that the run-up in the federal debt occurred as interest rates collapsed. This allowed the federal government to finance its debt at little cost.

The publicly-held debt has exploded, but we are only beginning to pay the extra cost of carrying that debt.  This year alone, net interest costs will total $382 billion — 45 percent more than three years ago. And it only promises to worsen.

Net interest costs are expected to grow at an average annual rate of 7.9 percent over the decade.

Within ten years, annual net interest costs are expected to soar to $819 billion. The difference between what the federal government paid in interest last year versus what it will pay a decade from now is greater than Maryland’s entire gross state product.

And by the decade of the 2040s, net interest is expected to cost the federal government the equivalent of six percent of GDP — up from between one to three percent over the fifty years leading up to the Great Recession.

Rising interest costs will consume an increasingly larger share of all new federal revenue. This will place severe pressure on the federal budget.

Factor in the projected increase in federal outlays for health care and other mandatory programs, and the federal budget gradually spirals out-of-control.  Deficits grow the debt and that growth aggravates the deficit. It’s a vicious cycle.

Analysts anticipate this outcome despite projected increases in federal revenue. Under current law, revenue will jump from 16.4 percent of GDP this year to 18 percent by 2030 and even higher in following years. As Rep. Kevin Brady, the ranking Republican on Ways & Means, so aptly observed, “One thing has been clear for years: Washington does not have a revenue problem; it has a spending problem.”

Consequently, avoiding the debt curve from Hell will require policymakers to stabilize the federal debt-to-GDP ratio through deficit reduction and policies to accelerate long-term economic growth.

Unless taxpayers are willing to shoulder a substantially larger tax burden, most of the deficit reduction must come from restraining mandatory spending growth. Discretionary outlays are already slated under current law to fall sharply as a share of GDP. By contrast, mandatory outlays are projected to grow by 2.3 percent of GDP over the decade.  Spending restraint and deficit reduction will produce additional savings in the form of smaller interest payments, further reducing the deficit. A virtuous cycle!

Economic growth is the other key to avoiding the debt curve from Hell. Following a decade of stunted economic growth, the U.S. economy is responding positively to the Trump administration’s policy cocktail of regulatory relief and pro-growth tax reform. Further progress will require new policies to encourage labor force participation and to enhance productivity by better training and equipping workers. Workfare reform and a new emphasis on technical and vocational training would help the U.S. reach its full economic potential.

America is on the verge of the debt curve from Hell. Director Swagel says this will dampen economic output, lower household incomes, and potentially provoke a fiscal crisis.

How close? Too close for comfort.

James Carter served as the head of tax policy implementation on President Trump’s transition team. Previously, he was a deputy assistant secretary of the Treasury and deputy undersecretary of labor under President George W. Bush.