Supreme Court Justice Clarence Thomas panned a draft ethics rule that would dissuade judges from formally enrolling in ideological groups like the Federalist Society and its liberal counterpart, the American Constitution Society (ACS).

Speaking Friday night at a Federalist Society conference in Florida, Thomas suggested the proposal is an attempt to silence the conservative lawyers group. The proposed rule would also bind law clerks and staff attorneys.

“Now I think they’re about to silence the Federalist Society,” the justice said, according to remarks first reported by The Wall Street Journal. “So I guess I can’t come back.”

“Some of us are fighting back,” replied Judge Gregory Katsas, Thomas’s interlocutor during Friday’s event. Katsas, who serves on the U.S. Court of Appeals for the District of Columbia Circuit, has been a member of the Federalist Society since 1989, according to a questionnaire he submitted to the Senate Judiciary Committee.

The proposed rule issued from the Committee on Codes of Conduct of the U.S. Judicial Conference, a panel of federal judges that publishes advisory opinions regarding judicial conduct issues. The committee said judicial membership in either ACS or the Federalist Society undermines public trust in the courts.

The panel said it relied on three longstanding principles to reach its conclusion: first, a judge’s law-related outside activity should concern general improvement of the law or legal system, rather than specific social, civic, or policy goals; second, judges should avoid organizations that might reasonably bring their impartiality into question; and third, judges should be sure that their involvement with a particular group could not reasonably be seen as an endorsement of its positions.

The proposed rule does not prohibit judges from participating in Federalist Society or ACS programming, such as moderating a panel discussion or delivering a speech. The committee concluded that those activities aren’t fairly construed as an endorsement of the host’s views and positions.

The advisory opinion also makes a veiled reference to the Federalist Society’s close proximity to the Trump administration, stating that “changing circumstances require judges to regularly reassess whether their involvement in extrajudicial activities related to the law is proper under the Code.”

Longtime members of the Federalist Society fill out senior legal roles in the administration, and affiliation with the group is seen as a reliable proxy for jurisprudential views in judicial selection. Speaking to a Federalist Society convention in 2017, former White House counsel Don McGahn said the administration has effectively “in-sourced” the organization. (RELATED: Review: A Penetrating Account Of Clarence Thomas’s Life And Times) 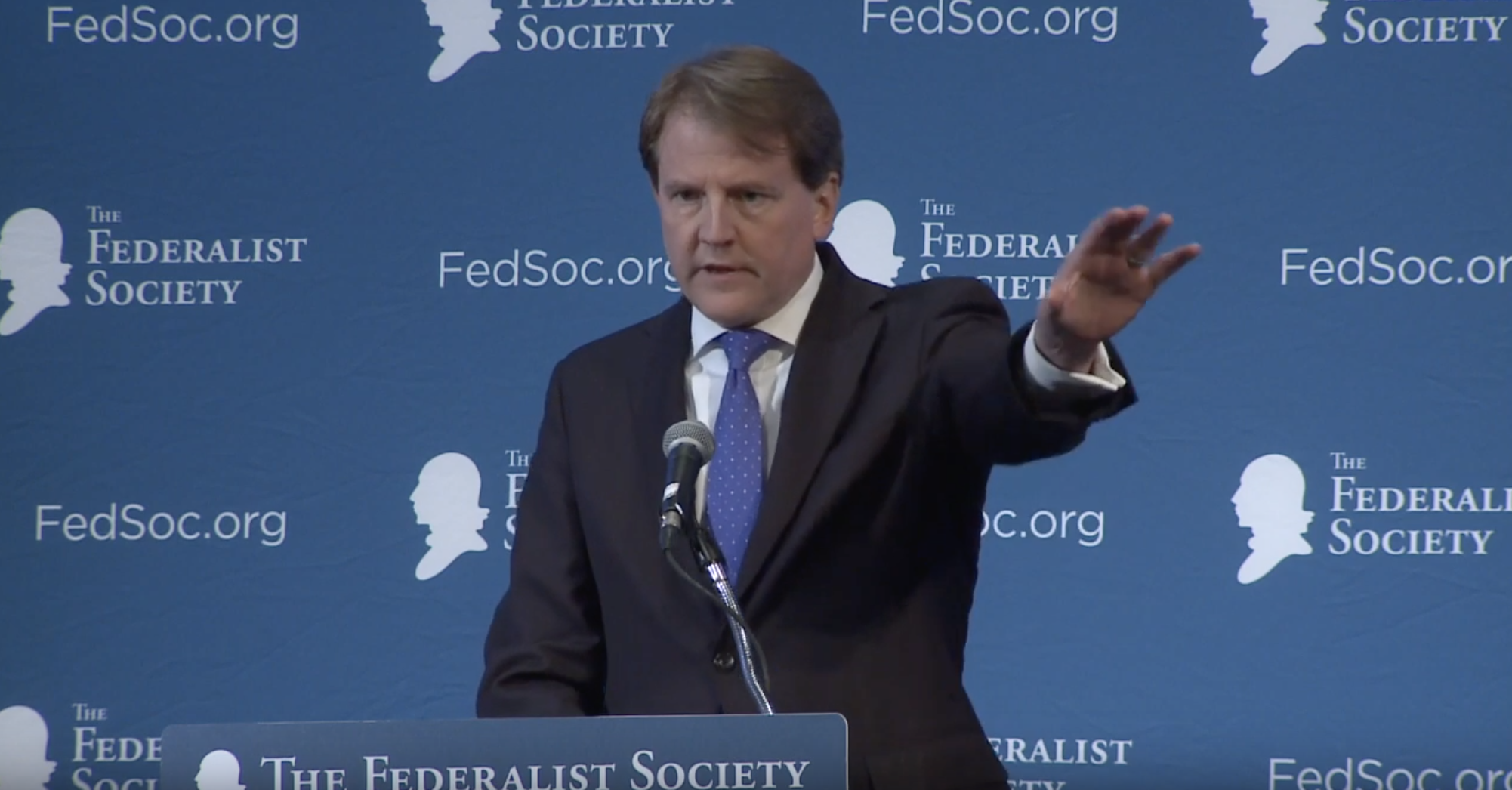 Conservative reaction to the proposed rule has been intensely critical. Writing in National Review, the Judicial Crisis Network’s Carrie Severino warned the committee’s logic reaches farther than it intends, to include associations like churches or affinity bar groups.

“Its attempt to change the applicable ethical guidance is based on logic that, if taken at face value and applied across the board, would wreak havoc on judges’ ability to connect not only to the legal profession, but also to the institutions of faith, education, and community,” Severino wrote.

For example, Severino noted the committee’s concerns would necessarily reach so-called affinity bar associations, like the National Association of Women Lawyers or the National LGBT Bar Association. Those groups regularly “take their advocacy to court on a regular basis and are open about their practice of filing amicus briefs to advance their agenda,” she wrote, citing the 2018 travel ban case as one such example.

Severino also broached the possibility that ideological bias infected the proposal. Two members of the Committee on Codes of Conduct, Judges Albert Diaz and Mary Murguia, are judicial liberals by reputation. Another member of the panel, U.S. District Judge John McConnell, is a friend and campaign donor of Democratic Sen. Sheldon Whitehouse of Rhode Island.

“Senator Whitehouse had no hand in the draft,” a Whitehouse spokesman told the Daily Caller News Foundation. “The senator has long supported legislation to bring greater transparency to the federal judiciary, and commends the Committee for reviewing its guidance to address the problems associated with the unprecedented amounts of dark money spent to influence our federal courts.”

Whitehouse is a sharp and outspoken Federalist Society detractor. He has accused the group of sitting at the nexus of an industrial-scale campaign to influence judicial outcomes through judge selection and strategic litigation.