Democratic House Speaker Nancy Pelosi ripped up her copy of President Donald Trump’s State of the Union as he wrapped up the speech Tuesday night, drawing a boatload of criticism from the other side of the aisle.

The tension was palpable from the night’s beginning as Trump declined to shake the House Speaker’s hand after handing her a copy of the speech. Fox News reported on air that the two had not spoken since the president called her a “third grade politician” during an October meeting at the White House. 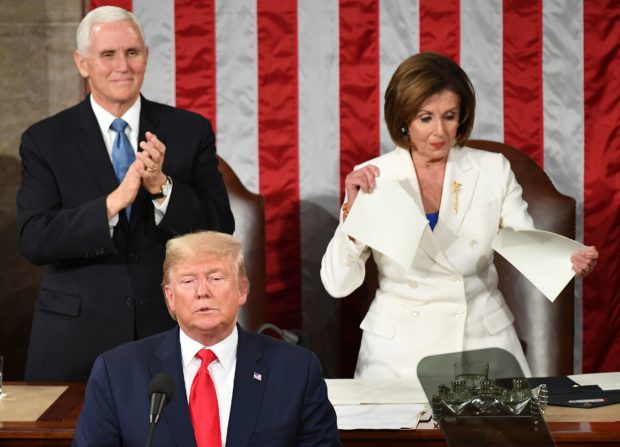 US Vice President Mike Pence claps as Speaker of the US House of Representatives Nancy Pelosi appears to rip a copy of US President Donald Trumps speech after he delivers the State of the Union address at the US Capitol in Washington, DC, on February 4, 2020. (Photo by MANDEL NGAN / AFP) (Photo by MANDEL NGAN/AFP via Getty Images)

The Speaker embarrassed herself by ripping up her paper copy of the speech in dramatic fashion. So pathetic. #SOTU2020

How petty of Pelosi. Ripping up a piece of paper doesn’t change the facts that were written on it—Americans are winning, in spite of the do-nothing Democrats.

???? NEW LOW FOR NANCY PELOSI: She ripped up @realDonaldTrump’s #SOTU speech for the cameras on national TV.

This speech was about American heroes and American workers. She decided THAT was worth literally tearing apart.

Nancy Pelosi rips up President Trump’s speech… this is all they have… Tantrums. pic.twitter.com/gi3JP8lVWp

The Democrats’ 3 plus year temper tantrum was on full display tonight.

Nancy Pelosi is so enraged that she cannot contain her hate

After the House delivered two articles of impeachment to the Senate, the upper chamber is poised to acquit the president this week.