President Donald Trump touted his administration’s economic successes during Tuesday night’s State of the Union address before outlining the “next step forward” in the “great American comeback.”

Trump specifically sought to tie progressive issues to traditional conservative causes in order to chart a shared path to the “most exceptional republic ever to exist in all of human history.” 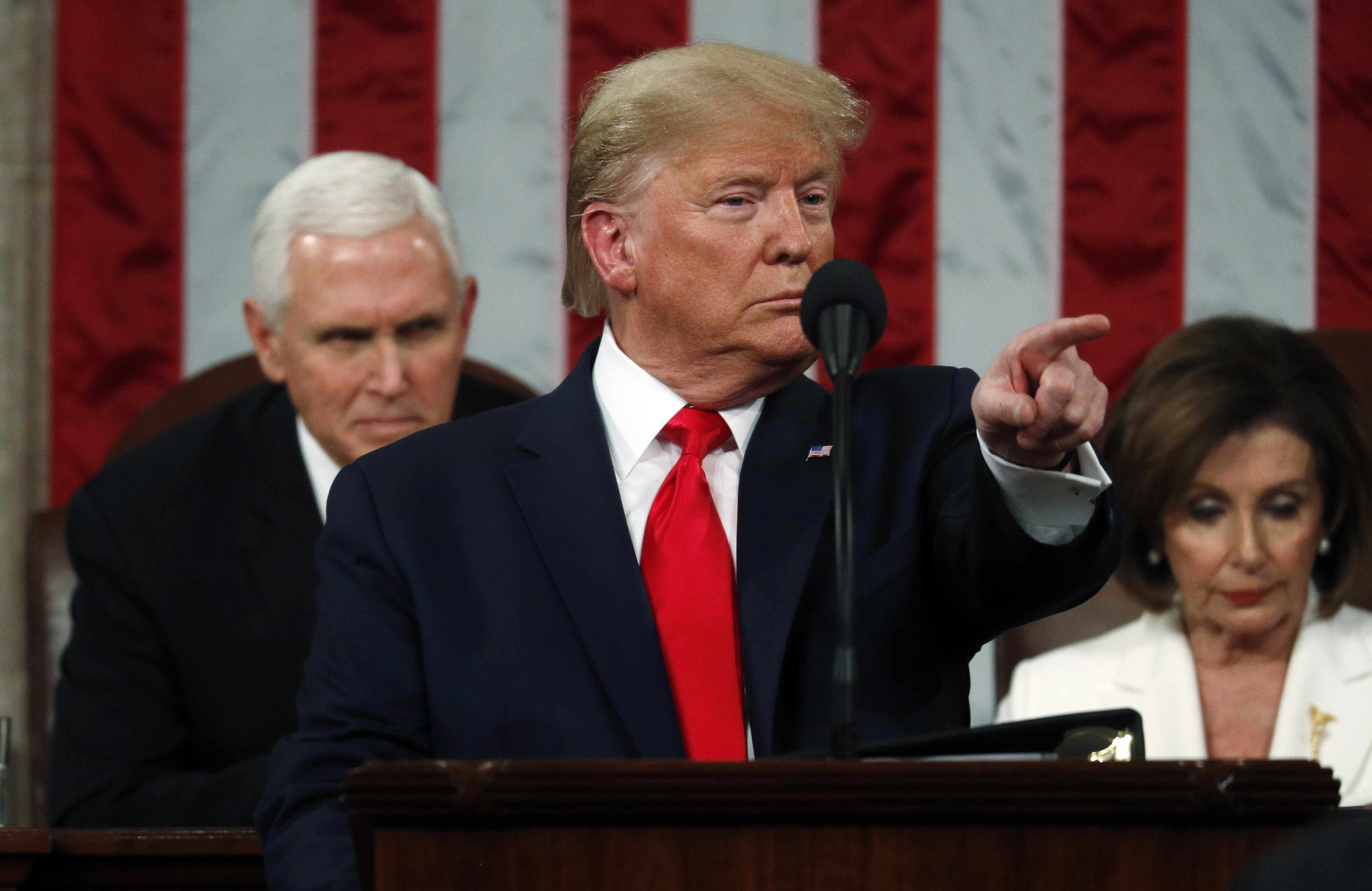 That latter half of the speech additionally featured several surprises, including the reunion of a military family, the gifting of an opportunity scholarship to a fourth grader from Philadelphia, and an impromptu Presidential Medal of Freedom award ceremony for conservative radio host Rush Limbaugh.

Notably, the president did not verbally address his ongoing impeachment trial, despite delivering his remarks in the same chamber in which he was impeached just seven weeks ago. He did, however, decline to shake hands with House Speaker Nancy Pelosi, who sent two articles of impeachment over to the Senate back in January.

Trump’s speech opened by claiming his first three years in office had “shattered the mentality of American Decline.” He pointed to his administration’s efforts to slash “job killing” Obama-era regulations, creating “7 million jobs.”

President Trump singled out the work of South Carolina Republican Sen. Tim Scott in building Opportunity Zones, which coupled with the Trump administration’s tax cuts, have created wealth and new jobs in “9,000 previously neglected neighborhoods.” He pointed to Tony Rankins, a U.S. Army veteran from Cincinnati, Ohio, who, by working with the Opportunity Zone company “R Investments,” overcame drug addiction, gained a new career, and reconciled with his family. Rankins was a special guest of Trump and First Lady Melania Trump Tuesday night.

As expected, the president took a victory lap on his recent signature of the United States-Mexico-Canada trade agreement, claiming the NAFTA successor will create “100,000 new high-paying American auto jobs.”

“Unlike so many who came before me, I keep my promises,” Trump told the room. “We did our job.”

He added that the USMCA would allow for ongoing trade negotiations with China to progress.

“For decades, China has taken advantage of the United States,” POTUS explained. “Now we have changed that, but at the same time, we have, perhaps, the best relationship we’ve ever had with China including with president XI. They respect what we’ve done.” 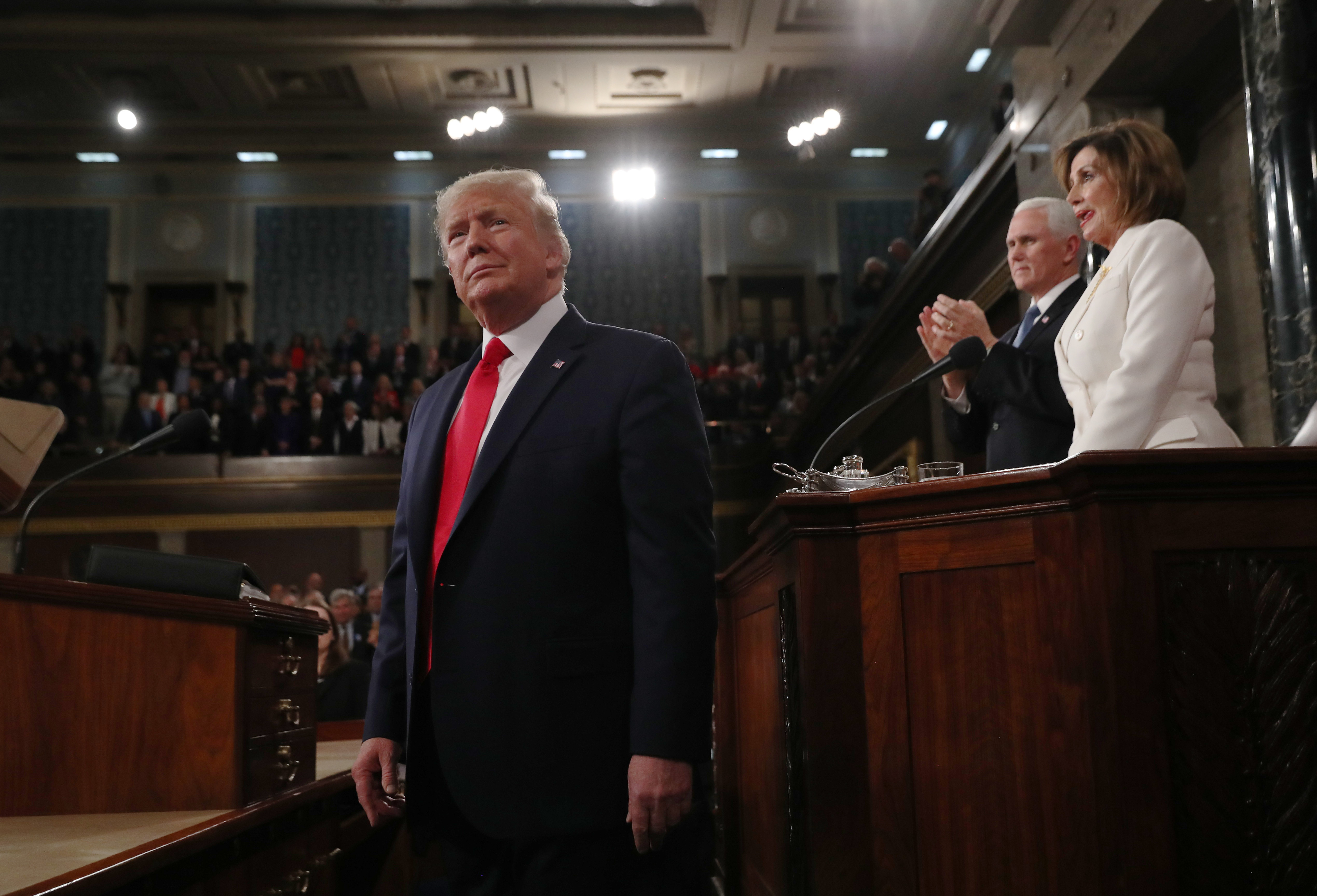 Trump closed the first half of his speech with a somewhat animated attack on socialism in the Western Hemisphere.

“That’s why my administration reversed the failing policies of the previous administration on Cuba,” he explained. “We are supporting the hopes of Cubans, Nicaragua and Venezuela to restore democracy.”

Trump particularly singled out the Maduro regime in Venezuela. While asking the Juan Guaido, the “true and legitimate President of Venezuela” and a surprise guest in the gallery Tuesday night, to rise, POTUS accused Maduro of being “a tyrant who brutalizes his people,” and promised he “will be smashed and broken.”

One of the most eye-raising moments from Tuesday night came when Trump called out the “132 lawmakers in this room [who] have endorsed legislation to oppose a socialist takeover of the health care system.”

He would go on to add that “over 130 legislators in this chamber have endorsed legislation that would bankrupt the nation by providing free to spare funded health care to millions of illegal aliens, forcing taxpayers to subsidize care for anyone in the world who unlawfully crosses the borders.”

Though Trump had campaigned on a promise to repeal and replace President Barack Obama’s Affordable Care Act, he pledged to “protect patients with pre-existing conditions” in addition to recipients of “Medicare and Social Security.”

His largest health care applause line of the night came while calling on Congress to pass “legislation that achieves the goal of dramatically lowering prescription drug prices.”

“Get a bill on my desk, and I will sign it into law immediately.”

“Every Child Is A Miracle Of Life”

Less than two weeks after becoming the first sitting president to speak at the March For Life in Washington, D.C., Trump urged Congress Tuesday to ban late term abortions.

Still, the predictably pro-life call-to-action was tempered with pledges to improve education funding, specifically for trade and vocational schools and “the nation’s historically black colleges and universities.”

Paid family leave, a pet issue of Trump’s daughter, Ivanka, was addressed in the “bipartisan Advancing Support for Working Families Act” in addition to Trump’s calls to extend family leave to mothers and fathers “all across the nation.”

Trump, whose rollback of coal regulations has earned the ire of the green wing of the Democratic Party, tied his recent announcement that the United States would join the 1 Million Trees Initiative to a need to spend on new domestic infrastructure.

“I ask you to pass over to John Barrasso’s bill for highways, bridges and tunnels all across the land,” he told the assembled lawmakers. “I’m also committed to ensuring that every citizen can have access to high-speed Internet, including and especially in rural America.”

“The Land Of Heroes”

The President’s final remarks played straight to some of his base’s core issues: namely law and order, border security, support for the military, and protection of civil liberties.

While he touched on immigration earlier in the speech, Trump specifically highlighted the work of Immigration and Customs Enforcement officers for arresting in 2019 “more than 120,000 criminal aliens charged with nearly 10,000 burglaries, 5,000 sexual assaults, 45,000 violent assaults and 2,000 murders.” 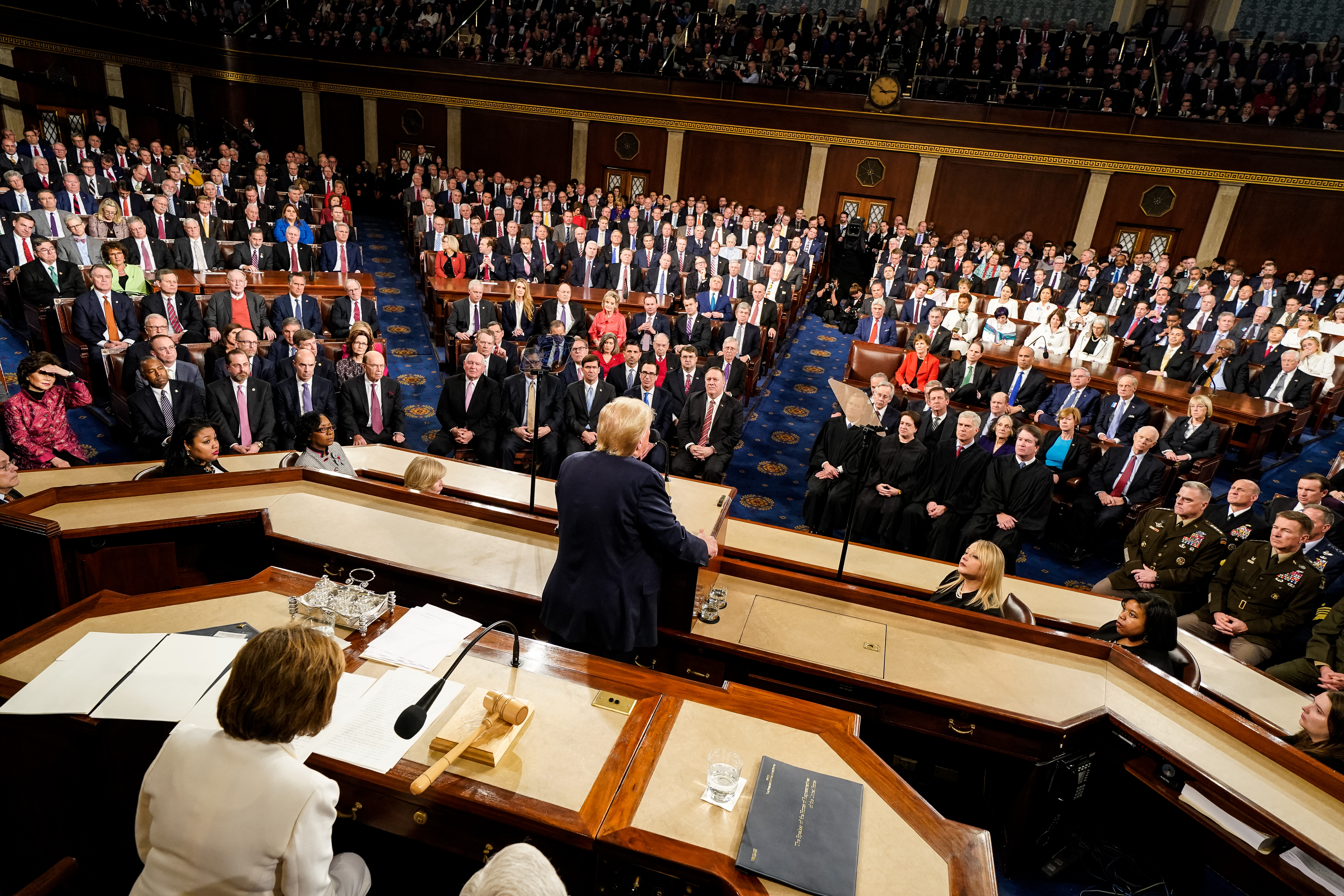 House Majority Leader Mitch McConnell was recognized for confirming an astounding 187 judicial nominees, including Supreme Court Justices Neil Gorsuch and Brett Kavanaugh. The president further pledged to continue fighting for Americans’ rights to “pray in public schools” and “to keep and bear arms” before turning his sights overseas.

Trump heartily defended his decision to kill former Iranian Quds Force General Qassem Soleimani, highlighting the gold star family of Army Staff Sergeant Christopher Hake, who was killed in Iraq by an explosive provided by Soleimani. He argued that taking out such a terrorist would “defend” the lives of America’s service members in the Middle East but added that is “not our function to serve other nations as law enforcement agencies.”

“We are working to finally end America’s longest war and bring our troops back home.”

“This is our glorious and magnificent inheritance,” the president added in closing. “America’s the place where anything can happen. America is the place where anyone can rise, and here on this land, on the soil, on this continent, the most incredible dreams come true.”

“This nation is our canvas and this country is our masterpiece. We look at tomorrow and see unlimited frontiers just waiting to be explored. Our brightest discoveries are not yet known. Our most thrilling stories are not yet told. Our grandest journeys are not yet made.”