Joe Thornton notched his 1,500 point in his NHL career Tuesday night with two assists for the San Jose Sharks against the Calgary Flames.

The 40-year-old is the 14th player in NHL history to achieve the feet and is the only active player in the league with 1,500 points. The closest to him is Alex Ovechkin of the Washington Capitals with 1,268 points.

“I just said it means I’m getting old,” said Thornton. “But it just means I’ve played on a lot of good teams, played with a lot of great players. I’m just fortunate to stay healthy. That’s all that really means.”

Thornton was drafted first overall in the 1997 NHL Draft by the Boston Bruins. He would go on to  score 454 points, 169 goals and 285 assists in his 532 games with the Bruins. After eight seasons with the Bruins, he was traded in 2005 to the San Jose Sharks.

Thornton has 1,046 points, 246 goals and 800 assists in 1,088 games for the Sharks and has been continuing his point totals. His two assists against the Flames last night gave him 22 points on the season with two goals and 20 assists.

“I thought it was his 3,500th point for how much he’s yapping,” San Jose forward Evander Kane said. “No, I didn’t know that until they were flipping the puck to the bench. Obviously a storied career. His production keeps trucking along. He continues to get up there in age and he still has that great vision and is able to make great plays to find open guys and he has great poise. You saw that on display a little bit tonight.” 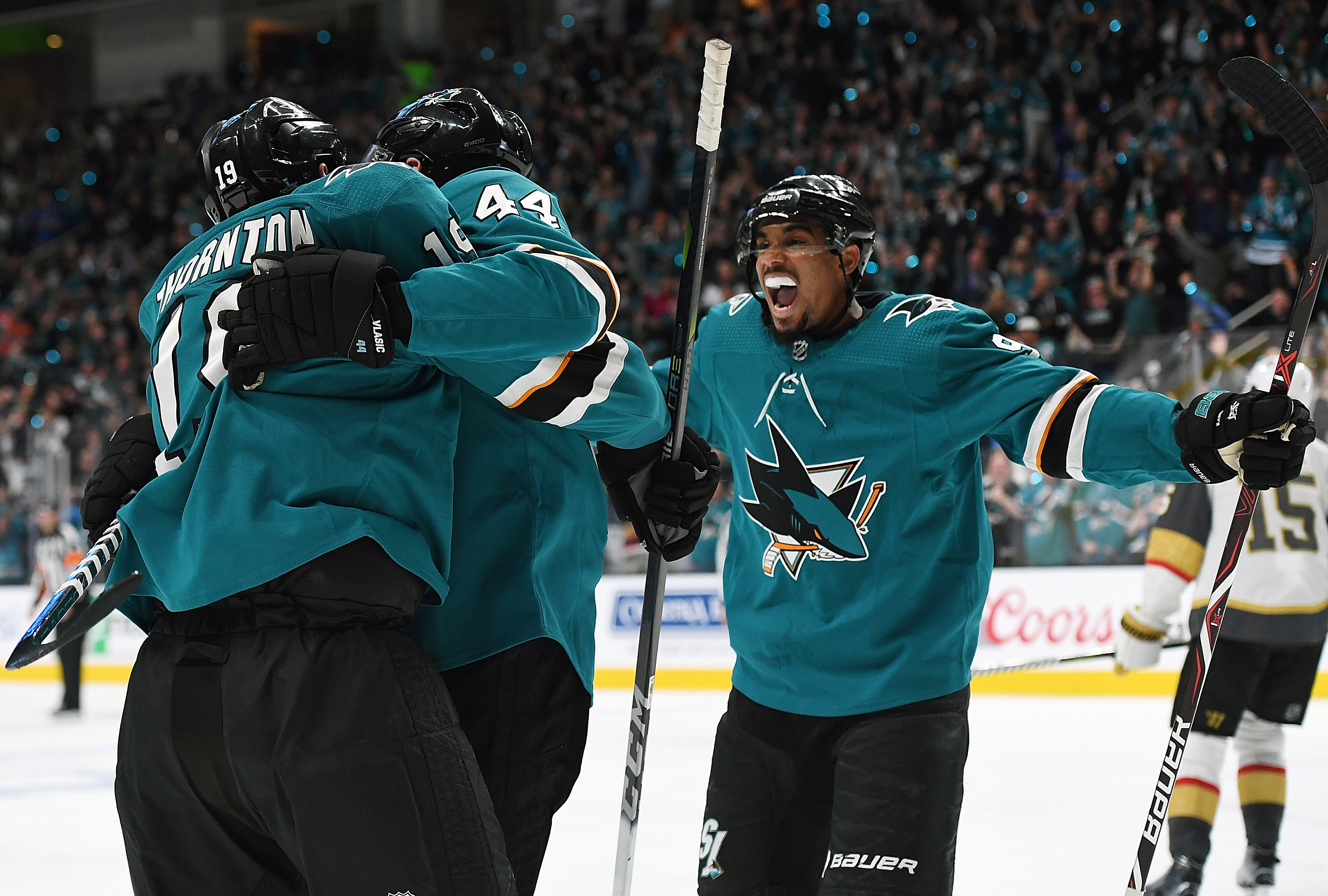 SAN JOSE, CA – APRIL 10: Marc-Edouard Vlasic #44, Joe Thornton #19 of and Evander Kane #9 the San Jose Sharks celebrates after Vlasic scored a goal against the Vegas Golden Knights during the second period in Game One of the Western Conference First Round during the 2019 NHL Stanley Cup Playoffs at SAP Center on April 10, 2019 in San Jose, California. (Photo by Thearon W. Henderson/Getty Images)

“It’s amazing,” the recently promoted coach of the Sharks Bob Boughner said. “We all knew where he was sitting, obviously, before the game. Just to see the way those goals were scored and what he did to create those … his hard work, his vision, hard stick, heavy stick … he won some battles. He’s playing, I think, some of the best hockey I’ve seen him play in the last couple of years, really. Who knows what he’s got left in the tank, but he just keeps going.”

Thornton fully tore both his ACL and MCL during the regular season and continued to play through the playoffs in 2018. Most fans were skeptical if Thornton would return after suffering such a serious injury. But the centerman signed a one-year, $2 million deal with the Sharks last summer.

“I know all the names,” Thornton said. “I’ve been a hockey fan since ’84, probably. I know all of the names. I’ve lived and breathed hockey my entire life. To be up there with these guys, it’s very humbling.”