“I was advised today that the president intends to recall me effective immediately as United States Ambassador to the European Union,” Sondland said in a statement, according to The New York Times.

The dual firings came days after Trump was acquitted in the Senate on charges that he abused his power by exerting pressure on Ukraine to open up politically charged investigations.

Vindman was escorted out of the White House when he was fired Friday. (RELATED: Lt. Col. Vindman Fired, Escorted From White House Grounds)

Both Sondland and Vindman testified about interactions they had in spring and summer 2019 regarding the Trump administration’s policy toward Ukraine.

Sondland, who was a major GOP donor before being chosen as ambassador, testified about his collaboration with Trump lawyer Rudy Giuliani and Kurt Volker, the special envoy to Ukraine, to set up phone calls and meetings between Trump and Ukrainian President Volodymyr Zelensky. 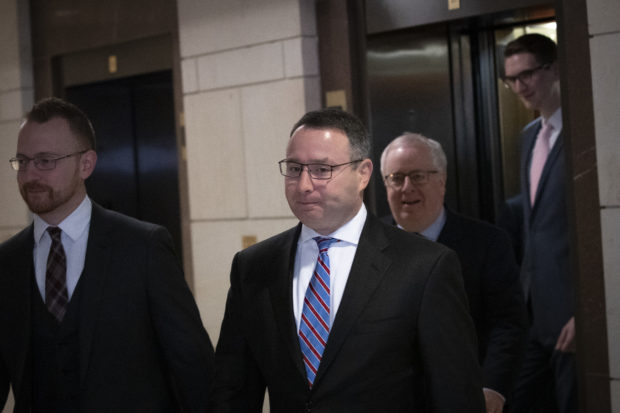 Army Lieutenant Colonel Alexander Vindman (C), Director for European Affairs at the National Security Council, arrives to review his deposition transcript with the House Intelligence, Foreign Affairs and Oversight committees at the U.S. Capitol on November 7, 2019 in Washington, DC.(Photo by Drew Angerer/Getty Images)

Sondland told the House Intelligence Committee on Nov. 20, 2019, that he believed Giuliani’s requests to Ukrainian officials to open up Biden-related investigations were a quid pro quo in exchange for a White House meeting between Trump and Zelensky.

He also said he came to believe Trump was withholding military aid to Ukraine in exchange for a Biden probe, though he acknowledged he was never explicitly told by Trump or anyone else that the aid was linked to the Bidens.

Vindman, who is Ukrainian-American, testified Nov. 19, 2019, that he was “deeply troubled” by Trump’s actions toward Ukraine.