Reaction in Iran to Gen. Qasem Soleimani’s death last month from a U.S. drone strike underscores the weakness and decay of the Islamic Republic.

The median age of Iran’s population is 31, so most people have no memory of the 1979 revolution. Many want it gone because it has only brought them misery, said Iranian-American activist Saghar Erica Kasraie.

“The regime gave them an economy that’s plummeting, a government that has invaded every aspect of their lives, whether that’s your private life, your religious rights, your everything,” Kasraie said. “You’ve had a chess player defect. You’ve had an Olympian defect. You have celebrities defecting. This is a really strong signal to show that people are no longer buying in.”

Protesters sought reforms in 2009’s Green Revolution, but now they want revolution, said Behnam Ben Taleblu, senior fellow at the Foundation for the Defense of Democracies (FDD). He notes the frequency of the protests against the regime has increased over the past few years. 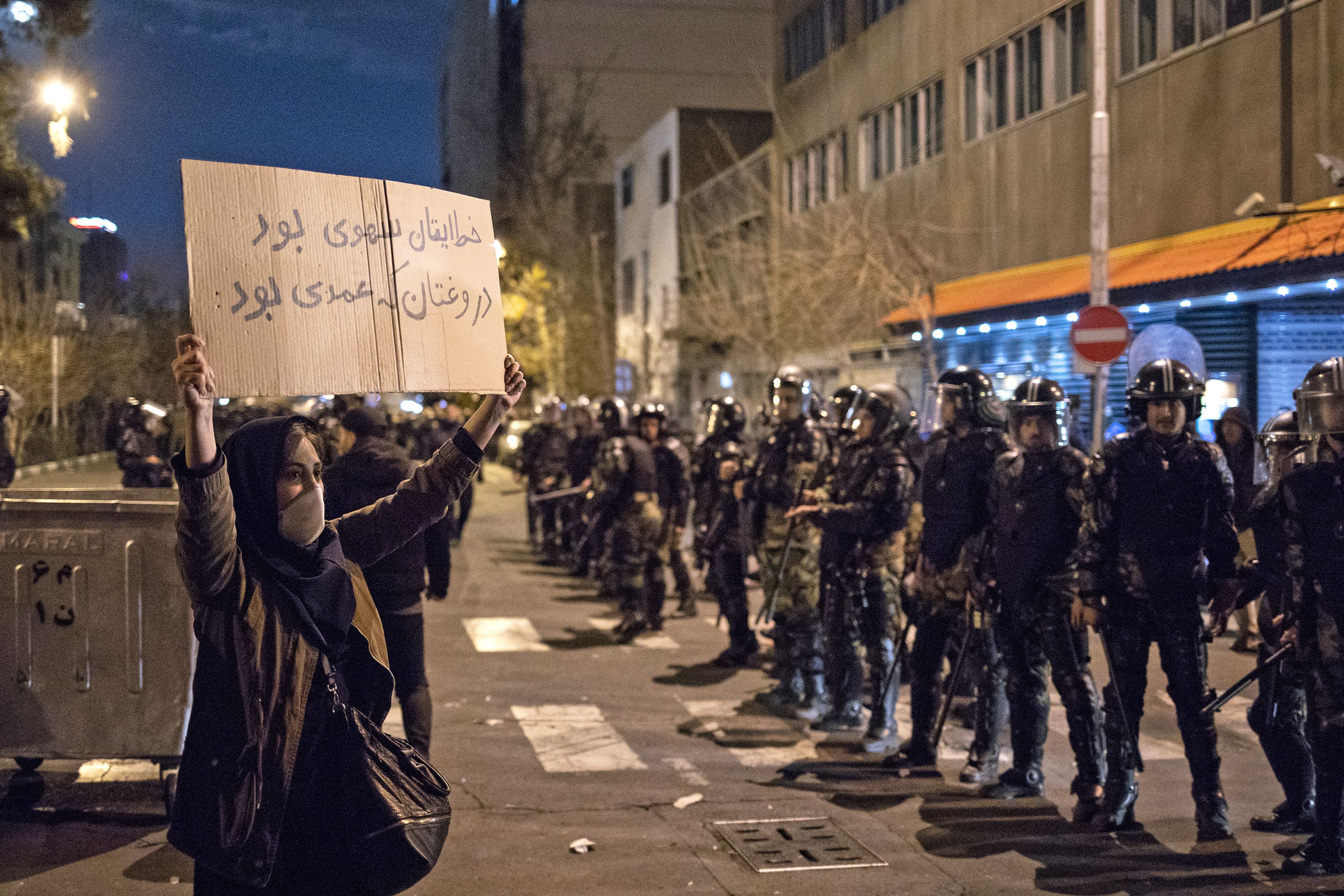 An Iranian woman holds a placard reading in Farsi “Your mistake was unintentional, your lie was intentional” during a demonstration outside Tehran’s Amir Kabir University on January 11, 2020. (Photo by STR / AFP) (Photo by STR/AFP via Getty Images)

Supreme Leader Ayatollah Ali Khamenei’s health could be the wild card that decides the regime’s fate. A squabble over his successor was reported a year ago, before the latest wave of protests. The 80-year-old ayatollah is rumored to have cancer.

“It will be a critical juncture for the regime,” Taleblu said. “A few years ago it might not have been, but now it is.”

What comes next will depend on domestic and international pressures, Taleblu continued.

Before the Jan. 3 strike, Soleimani was seen as untouchable. His death rocked the regime and became a touchstone for regime opponents to air their grievances.

“Killing Soleimani didn’t get Iranians to rally around the flag,” said Michael Pregent, a former Army intelligence officer and senior fellow at the Hudson Institute. “Regime collapse will happen at some point on its own; it won’t be accelerated or slowed by U.S. actions and inactions.”

The killing is a “potential game changer,” said former National Security Adviser Gen. James Jones. Unrest inside Iran has moved “the needle toward possible collapse of [the] regime.”

Khamenei suffered a major blow with the loss of his right-hand man. Soleimani’s death likely degraded the Islamic Revolutionary Guard Corps’ Quds Force, because his successor, Gen. Esmail Ghaani, is not as capable, Gen. Joseph Votel, retired head of the U.S. Central Command, told a conference in Israel last week. (RELATED: One Injured In Rocket Attack On US Embassy In Baghdad)

Thousands of protesters took to the streets against the regime after it admitted shooting down an Ukrainian airliner Jan. 8 during the regime’s retaliatory missile strikes that followed Soleimani’s death. Protests fueled by Iran’s political and economic isolation have challenged the regime for the past two years, with many people infuriated by the country’s funding of terrorists while Iran’s people face shortages of affordable food amid rampant inflation.

Iranian protesters blame the regime for a lack of basic necessities because of its obsession with supporting violent terrorist proxies in Iraq, the Palestinian territories, Syria, Lebanon and Yemen. Several videos showed protesters refusing to trample on images of the U.S. and Israeli flags. Protesters burned or tore down posters and banners bearing Soleimani’s image. Many Iranians are weary of the anti-American and anti-Israeli propaganda that has cut off their nation from the rest of the world. 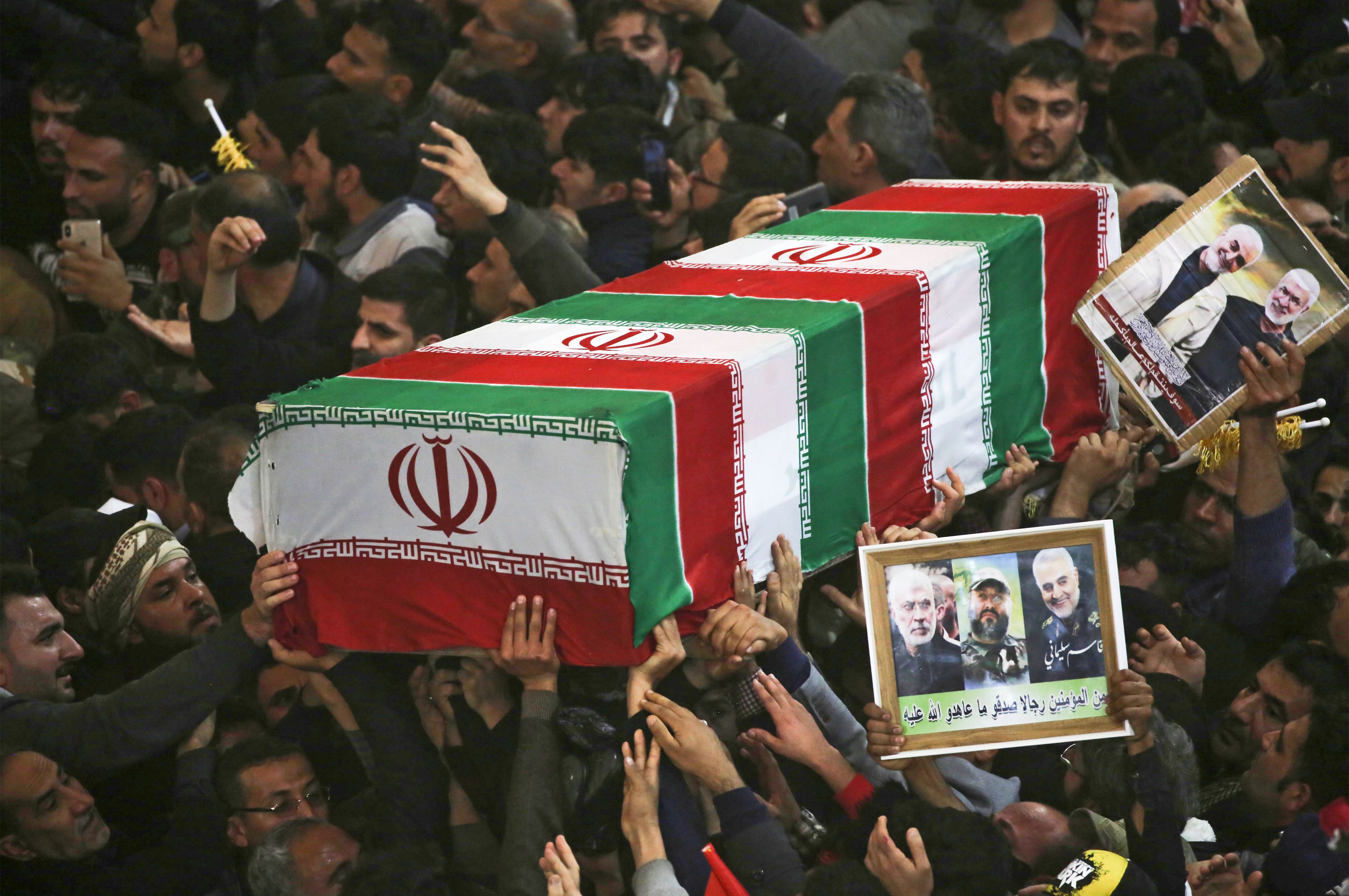 Although the protests have been peaceful, at least two violent acts of resistance against the Islamic Revolutionary Guard Corps (IRGC) and other security forces that led the crackdown against the protests were reported. Defiant protesters firebombed the Command HQ of the State Security Force in the city of Mashhad on Jan. 20 and an IRGC base in Tehran on Jan. 19.

Days later, unknown gunmen on a motorcycle killed Abdolhossein Majdam, commander of the IRGC’s Basij militia in Iran’s southwestern Khuzestan province. Majdam was a close associate of Soleimani’s, news reports said. He had been involved in the crackdown on protesters.

Amnesty International documented the systematic use of pellets normally used for hunting small animals and rubber bullets during the most recent round of protests.

In November, IRGC forces killed at least 1,500 protesters across Iran, and at least 12,000 people were arrested. (RELATED: Iran Erupts In Protests Amid Fallout From Plane Shooting)

An Iranian protester in the city of Mashhad, who insisted on only identifying herself as “Sahar” for fear of being arrested by the regime who was referred to us by Kasraie, told the Investigative Project on Terrorism (IPT) in a phone conversation that she and her fellow protesters thanked God when they heard about Soleimani’s death.

“We are hoping these pressures go somewhere because whether [President] Trump puts pressure on the regime or whether [he] doesn’t because we the Iranian people are suffering from the Islamic regime,” Sahar said. “They are oppressing the people.

“I really like [Trump] because he’s because at least he does not give money like Obama did to his mullahs so they can kill more people,” she continued. “We appreciate that.”

She contends that Iran is ruled by a mafia posing as a government.

Many of the protesters have come from groups representing causes normally associated in the West with the political Left.

“The recent protests in Iran have been led by feminists, environmentalists, syndicalists, teachers and workers’ unions, i.e. the natural allies of the left. But when it comes to the Middle East, many on the western left has chosen completely different allies: dictatorships, militarists, and totalitarians,” Omid Shams, an Iranian exile and academic at the University of Portsmouth, wrote on the Open Democracy blog.

Ken Timmerman, founder of the Foundation for Democracy in Iran, believes that it’s only a matter of time before the regime falls.

“It is entirely feasible to see the upper echelons of the IRGC flee the country when they see things going south to be able to protect themselves and to protect their personal fortunes,” Timmerman said.

Taleblu agreed that it’s not a “matter of when rather than if the regime will fall.”

Some fraying from within already has begun.

“And the most important thing to remember is that Iran’s economy was tanking before we left the Iran deal and before we reimposed sanctions.”

The best thing U.S. policymakers can do is sit back and not do anything that legitimizes the regime that could harm the protesters’ battle, Pregent said. (RELATED: Exclusive: Rep. Mike Gallagher Says U.S. Must ‘Stand Firm’ In Face Of Iranian Retaliation For Soleimani)

“Remember, all of these provocations were accelerated to get sanctions relief. We can’t show them their playbook has worked,” Pregent said. “The president doesn’t need any sort of lid on Iran before the election because he can say he killed Baghdadi and he killed Soleimani.”

“There is no more risky business than predicting when an authoritarian regime will collapse under the weight of its own putrefaction. Natan Sharansky has an excellent explanation of this phenomenon in his book,” Carafano wrote in a Fox News.com column. “[T]hey control every element of governance, civil society, the economy, the military and the media. This makes it really hard to see the cracks that eventually lead to failure and collapse.

“This is a tough bunch of mullahs. They have sustained the revolution for nearly a half-century and show no signs of letting up or losing control.”