Andrew Yang fired dozens of staffers following his poor performance in last week’s Iowa caucus, and with his prospects in New Hampshire not looking much better, his supporters may be preparing to say goodbye.

Despite his recent return to the Democratic debate stage, Yang came in sixth with 1% of the vote in Iowa, and CNN’s final poll going into New Hampshire had him in seventh at 4%, behind Tulsi Gabbard. Campaign spokesmen are saying the dozens of firings are only due to the end of the Iowa caucus, however.

“As part of our original plans following the Iowa caucuses, we are winding down our Iowa operations and restructuring to compete as the New Hampshire primary approaches,” Campaign Manager Zach Graumann told Politico. “These actions are a natural evolution of the campaign post-Iowa, same as other campaigns have undertaken, and Andrew Yang is going to keep fighting for the voices of the more than 400,000 supporters who have donated to the campaign and placed a stake in the future of our country.” (RELATED: Andrew Yang Ends His MSNBC Boycott)

Many of the staffers Yang has let go weren’t involved in the campaign’s efforts in Iowa, however. While the Iowa operation was disbanded, Yang also fired his national political director and deputy director, and his national policy director.

The dozens of firings were also poorly managed, according to staffers who went to Politico and CNN.

“Some people found out through gossip or back channels, and things weren’t timed particularly well,” said one fired staffer. “Some people were shut out of their email, before getting an official phone call [from the campaign] or anything like that. So definitely not the most organized.”

“The organization was a mess, but it still managed to do incredible things while being an absolutely f–ing disaster,” said another. (RELATED: Andrew Yang Rips Into Media Over Impeachment Coverage)

Yang’s campaign made headlines at the outset thanks to its novel – for Democrats – affinity for internet culture. Yang Gang memes became so popular on the notorious website 4chan that the candidate’s subreddit had to denounce them.

Memes typically associated with President Donald Trump’s more extreme supporters, such as Pepe the Frog, frequently appeared in support of Yang instead. 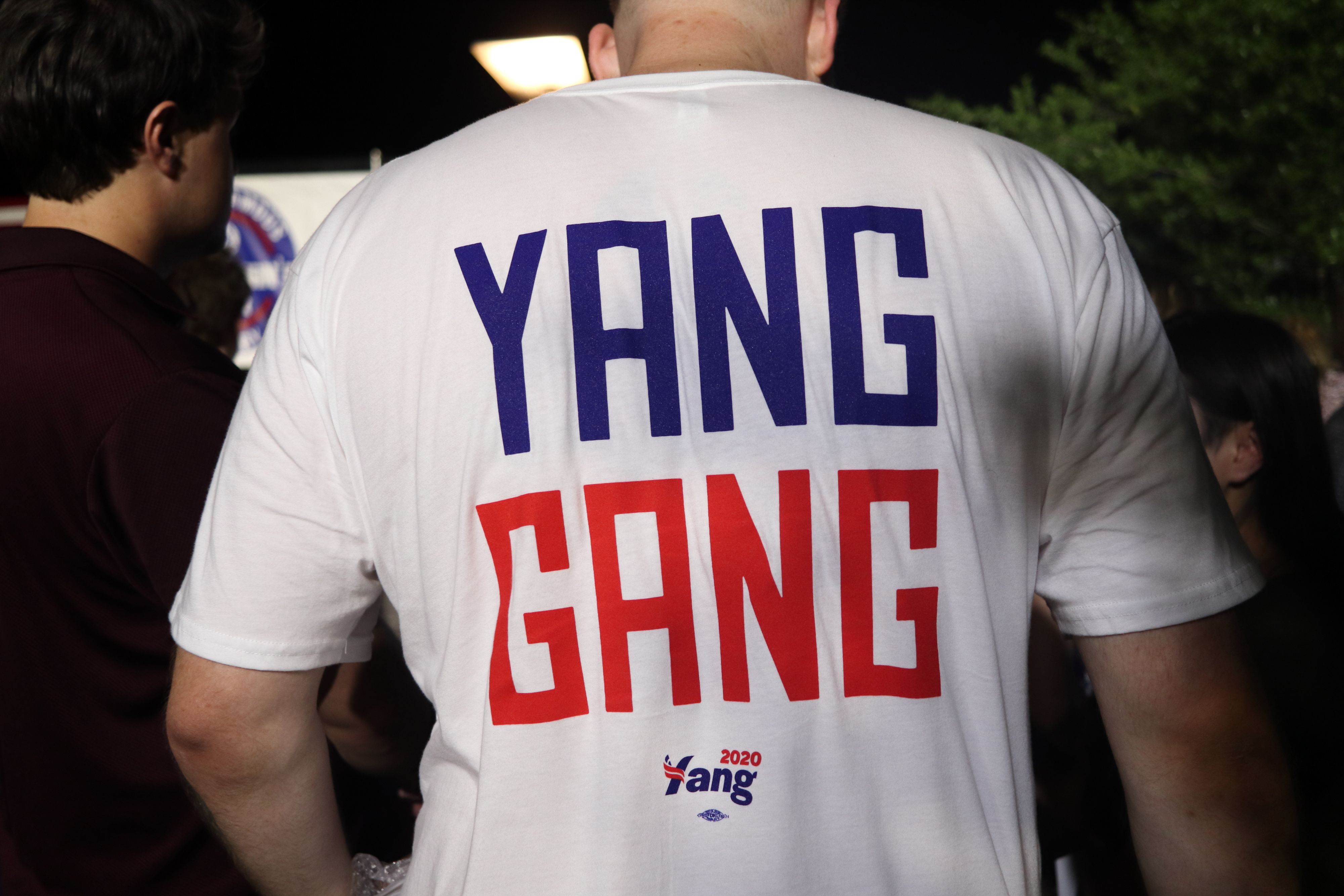 A supporter of presidential hopeful Andrew Yang attends the World Famous Jim Clyburn Fish Fry at the EdVenture Children’s Museum in Columbia, South Carolina, on June, 21 2019. – Many of the Democratic candidates running for president were in Columbia to make appearances at the South Carolina Democratic Party Convention and the Planned Parenthood Election Forum on June 22. (LOGAN CYRUS/AFP/Getty Images)

Yang was also cavalier about his race, going to far as to lean into stereotypes about Asian people’s affinity for math. His campaign’s equivalent to a Make America Great Again hat was simply a baseball cap with “MATH” emblazoned on the front.

Yang fashioned himself as a candidate of the future, keeping Democratic talking points of healthcare and education, but taking issues such as automation much more seriously and presenting more novel solutions to climate change. (RELATED: Andrew Yang Defends His Healthcare Plan)

To the surprise of many, Yang’s analysis of the Trump era sounds more like Fox News’ Tucker Carlson than one of his Democratic opponents. This disagreement came to a head Friday during the New Hampshire debate.

“Fundamentally you are missing the lesson of Donald Trump’s victory,” he told Pete Buttigieg. “Donald Trump is not the cause of all of our problems, and we are making a mistake when we act like he is. He is a symptom of a disease that has been building up in our communities for years and decades.”

“These communities are seeing their way of life get blasted into smithereens. We’ve automated away 4 million manufacturing jobs and counting; we’re closing 30 percent of New Hampshire’s stores and malls, and Amazon – the force behind that – is literally paying zero in taxes.”

While Yang did advocate for a form of universal basic income, he also disagreed with Independent Vermont Sen. Bernie Sanders on making Medicare-for-All mandatory.

“To me the goal of the government has to be that we can demonstrate that we can out-compete private companies and push them out of the market over time,” he said.

1
Conservatives Mock Alexandria Ocasio-Cortez For Citing HS Science Fair Among Her Credentials
Politics
2
Joe Biden Says He 'Became A Professor' After Leaving White House — He Never Taught A Class
Politics
3
Judge Dismisses Lawsuit Against FBI Informant Used In Trump Probe
US
4
Witness No More — Hunter Biden Embraces Life As An Artist, And The NYT Is Here For It
Media
5
'Beyond The Pale': Trump Jr. Spokesman Fires Back At Threats From Democratic Congressman
Politics