Republican Florida Rep. Matt Gaetz has been one of President Donald Trump’s closest allies in Congress over the years, but some Trump allies appear to have turned on the firebrand congressman.

The relationship between Gaetz and the Trump White House appeared to fracture at the beginning of the year, after Gaetz was one of just three Republicans to vote in favor of a war powers resolution limiting the president’s authority to take action against Iran. The vote occurred shortly after Iran launched attacks on a U.S. base in Iraq, which followed the killing of notorious Iranian General Qasem Soleimani in a targeted U.S. strike. A non-interventionist conservative, Gaetz supported Trump’s decision to take out Soleimani, but has been skeptical of further military action in Iran. (RELATED: How The Liberal Media Spent The Last Week Shilling For Iran)

The Washington Post reported last month that Gaetz’s decision to buck his party on the war powers resolution angered the president, who reportedly complained to his aides about Gaetz’s decision. A White House official told the Post that the administration was “disappointed” in the congressman. A pro-Trump political action committee (PAC) called Drain the DC Swamp PAC has been running Facebook advertisements attacking Gaetz over his war powers vote, targeting the congressman’s home state of Florida. (RELATED: Matt Gaetz On Transgender Bill: Trump Could Declare Himself First Female President)

The PAC’s biggest donor over the past year has been Tatnall Hillman, a reclusive conservative donor living in Aspen, Colorado. Hillman has donated $140,000 to the Drain the DC Swamp PAC over the past nine months, according to Open Secrets. Not much is known about Hillman’s political views other than that he has frequently donated to Republican candidates over the years.

The son of a billionaire coal and gas magnate, Hillman was ranked by the Aspen Times in 2014 as the state of Colorado’s third biggest political donor. That year, Hillman gave the maximum amount to Republican Colorado Senate candidate Cory Gardner, and Republican Rep. Scott Tipton, both of whom won their elections that year. Another beneficiary of Hillman’s donations in recent years is former Trump National Security Adviser John Bolton, a supporter of regime change in Iran. Hillman donated $14,000 to Bolton’s Super PAC in 2016, and has frequently donated to the PAC in recent years. Over the past year, Hillman has opened up his checkbook to help the president’s re-election, donating to several pro-Trump PAC’s, including “America First Agenda” and “Black Americans To Re-Elect the President,” among others.

It’s not known if the White House sought retribution against Gaetz for his war powers vote, but the congressman was conspicuously absent from Trump’s impeachment defense team, while other Trump allies in the House, including Jim Jordan of Ohio and Lee Zeldin of New York were front and center defending the president. The congressman denied having been removed from Trump’s impeachment team early Tuesday morning, during a Twitter back and forth with New York Times White House Correspondent Maggie Haberman. (RELATED: The Tide Is Turning Against Democrats On Impeachment)

“I was never ‘ousted.’ During impeachment I spoke to the President regularly [almost daily],” Gaetz tweeted. “I reckon it’s easier for Maggie Haberman to deem a fictional ‘ouster’ concluded than to simply acknowledge that @jdawsey1’s reporting was exaggerated, poorly sourced or wrong.”

Even if this was some sort of punishment for Gaetz’ war powers vote, the congressman has not wavered in his support of the president, even telling Fox Business host Lou Dobbs last week that Utah Sen. Mitt Romney should be expelled from the Republican caucus over his support for impeachment. Trump, himself, doesn’t appear to be holding a grudge against the Gaetz either. Gaetz was in attendance during the president’s Monday night rally in New Hampshire, and received a special shoutout from the president during his speech. So, is all well between Trumpworld and Matt Gaetz? 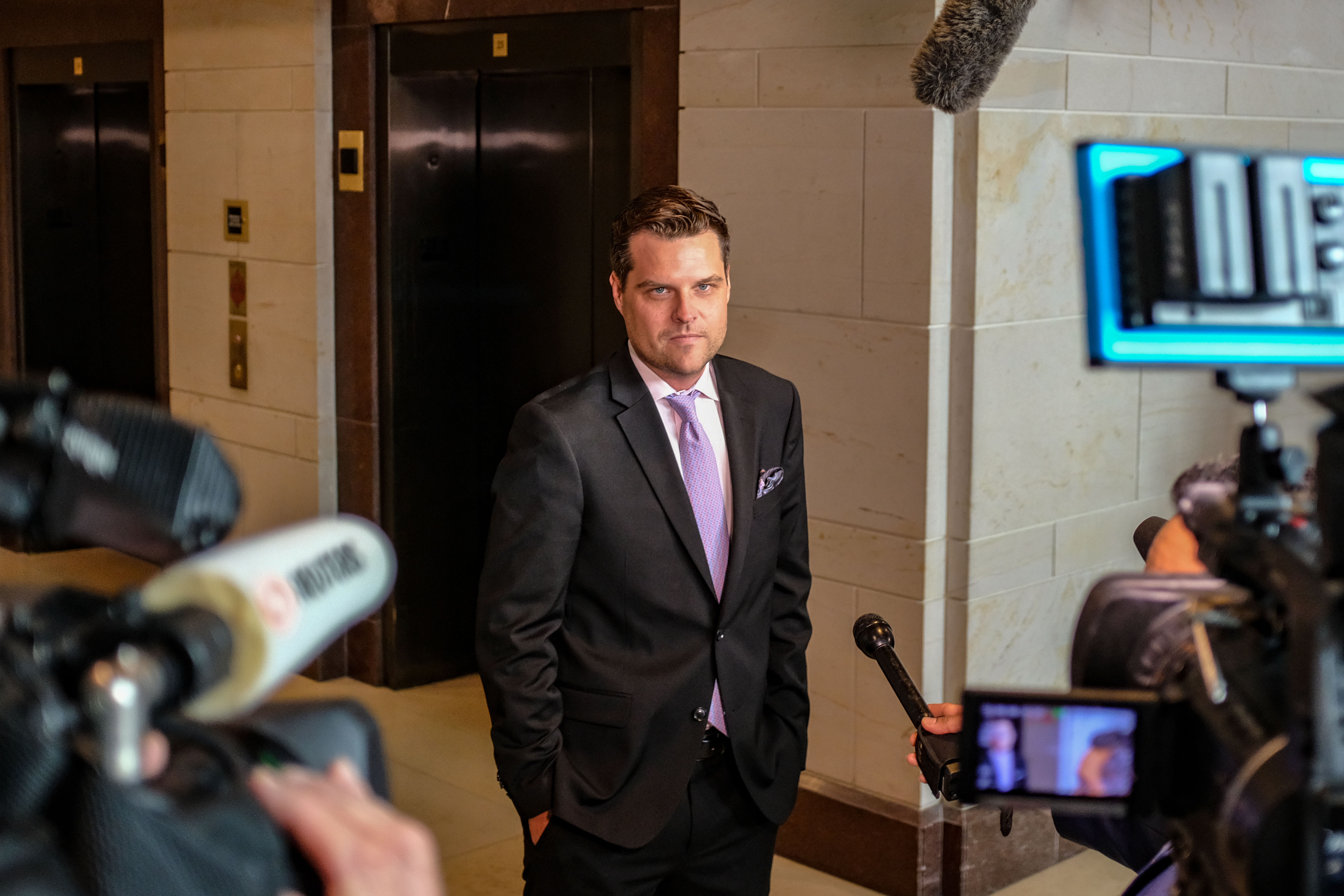 U.S. Rep. Matt Gaetz (R-FL), pauses while speaking to members of the media on Capitol Hill on October 14, 2019 in Washington, DC. (Photo by Alex Wroblewski/Getty Images)

“A segment of the administration punished Gaetz for stepping out of line on a recent warpowers vote,” Curt Mills, a national security reporter at The American Conservative told the Daily Caller. “The effective punitive punishment that happened was him being taken off the impeachment team.”

But, even if certain officials inside the administration and within the donor class of the Republican Party have turned on Gaetz, his relationship with the president does not appear to have frayed long term.

“Gaetz doesn’t really care about his relationship with the administration writ large given that he has a direct line to the president,” Mills said, adding that he believes the president and his advisers are far apart on certain issues.

This isn’t the first time Gaetz has disagreed with the Trump administration on foreign policy. The congressman broke with the president on support for Saudi Arabia, and was one of just 18 Republican congressman to vote to cut off aid for the Saudi-led intervention in Yemen. The 37-year-old congressman is following an unusual path in his second term in congress, emphasizing his support for the president, but breaking with him on issues he feels are necessary. The career of Matt Gaetz will be fascinating to follow, and it’s just getting started.

1
ABC News Suspends Reporter On Eve Of Project Veritas Exposure
Media
2
Respirators Listed For Over $10,000 Amidst Coronavirus Fears
US
3
Another Republican Congressman Announces He Will Not Seek Reelection
Politics
4
Here Are The 2 Republicans Who Voted Against Protecting Unborn Babies After 20 Weeks
Politics
5
Democrats Feature American-Indian Tribe Known For Rampant Drug-Smuggling To Speak Against Border Wall
Politics