Dream Defenders aims to abolish the use of prisons, according to the group’s website and public statements.

An educational resource Dream Defenders created in 2016 for schools depicts the PFLP as victims of oppression and draws comparisons between the two groups.

“The PFLP is fighting against Israel, the Zionist movement, the Palestinian Authority governing body, global imperialism, and Arab reaction,” the documents states, noting that the group’s “tactics have included hijackings, assassinations, car bombings, suicide bombings, and paramilitary operations against civilian and military targets.”

“They want to be free from global imperialism,” it adds. “They want liberation. They want equal rights. Just like the Dream Defenders.” (RELATED: Bernie Rally Features Trotskyist Seattle Council Member Whose Party Wants To Seize Control Of Banks)

“We believe that this should inform the Free Campaign in the way that we educate our communities on issues relating to oppression in all areas of the world,” it continues.

Israel is a “settler colonialist project” that “was declared on top of stolen Palestinian land,” Dream Defenders’s website asserts.

Dream Defenders in 2016 organized a West Bank trip that was led by former PFLP member Mahmoud Jiddeh, according to reports by Fox News and the Washington Free Beacon. Jiddeh spent 17 years in prison for planting explosives in Israel that wounded nine civilians, the reports noted.

Dream Defenders did return inquiries from the Daily Caller News Foundation about the group’s position on prison abolition, the PFLP and Sanders. The Sanders campaign also did not return an email seeking comment.

Democrat Andrew Gillum was criticized during his 2018 campaign for Florida governor over his ties to Dream Defenders, but the Sanders campaign has fully embraced the radical group. 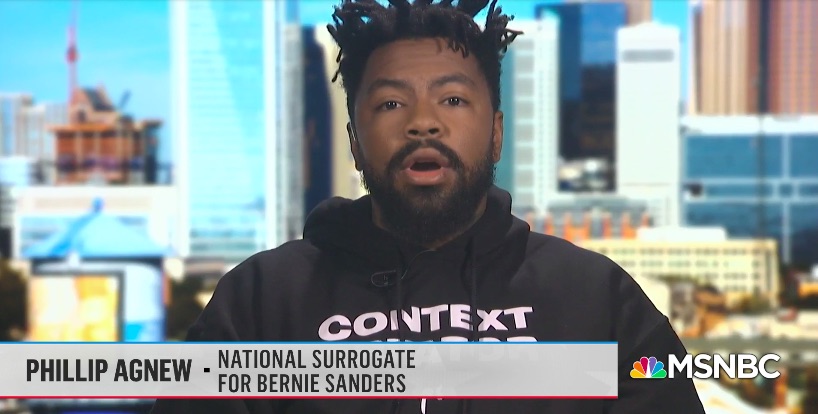 Agnew appeared on behalf of the Sanders campaign Saturday in a heated MSNBC segment, where he tangled with Tom Steyer adviser Jimmy Williams.

Agnew has led Sanders campaign events all over the country, including a “GOTV” (get out the vote) party for Sanders ahead of Saturday’s South Carolina primary, according to Sanders’ campaign website.

He previously co-led a rally with Democratic New York Rep. Alexandria Ocasio-Cortez and left-wing filmmaker Michael Moore, and was scheduled to lead another Sanders event on Sunday, this time in North Carolina, according to Sanders’s campaign website.

Sarsour and two other Women’s March board members stepped down in September 2019 following repeated anti-Semitism scandals that hurt the group’s political standing.