White House senior adviser Ivanka Trump described herself as a “proud Trump Republican” in an interview with The New York Times.

In what has been a remarkable 180-degree political transformation from when she was a Democratic donor with progressive views on issues like climate change, parental leave, and pay equity, her status as a “card-carrying member of her father’s ‘Make America Great Again’ coalition is now complete,” writes Annie Karni and Maggie Haberman for the Times in an article published Monday.

After missing the deadline in 2016, Trump told the Times that she decided to switch her voter registration to Republican from Democrat so she could vote for her father in New York’s GOP primary. She officially made the switch on October 22, 2018, the Times reported.

“I am a proud Trump Republican,” she told the outlet in a Monday interview. “I believe he’s broadened the reach of the Republican Party, which is really important to me.” 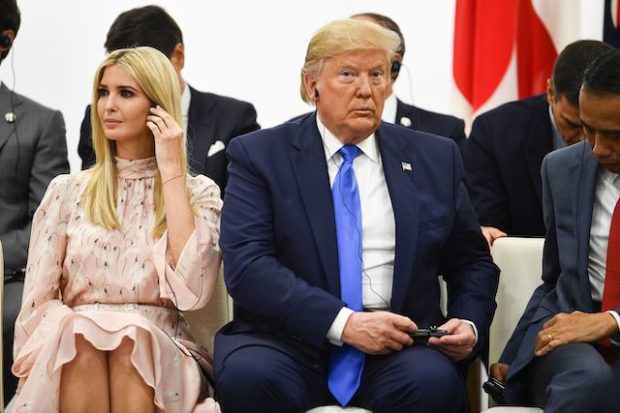 US President Donald Trump (C) and advisor to the President Ivanka Trump (L) attend an event on women’s empowerment during the G20 Summit in Osaka on June 29, 2019. (Photo credit: BRENDAN SMIALOWSKI/AFP/Getty Images)

Describing her political shift, Trump said she wasn’t “going to speculate” on other people’s projections of her: “In areas outside of my portfolio, I tend to agree more with the more conservative viewpoint more often than where the Democrats are today. No one person or party has a monopoly on good ideas.”

Karni and Haberman report that the Democrats’ push for impeachment gradually led to a more “aggressive and raw” online persona for the first daughter. (RELATED: Ivanka Trump Speaks Out On Impeachment Inquiry)

Over the past few months, she has started using her Twitter feed to lash out at Democrats and has appeared at campaign events more clearly devised to appeal to Mr. Trump’s base. Ahead of the New Hampshire primary in February, for instance, Ms. Trump traveled to Portsmouth to participate in a “Cops for Trump” event.

This factional fever and incoherent, ill-conceived process has finally ended and the President has rightfully been acquitted. It is time for our Country to move forward. Together.

POTUS has accomplished so much and is just getting started.

Ms. Trump’s husband, Jared Kushner, also recently registered as a Republican, telling reporters at a campaign briefing that he thinks the party “is growing now that people like me feel comfortable being part of it.”