“On August 19 of last year I listened in stunned silence as Nikole Hannah-Jones, a reporter for the New York Times, repeated an idea that I had vigorously argued against,” reads the first sentence of Friday’s essay by Leslie Harris, a history professor at Northwestern University.

Harris is just the latest in a string of academics to levy criticism on Hannah-Jones and the 1619 Project. She is the first, however, who actually took part in the project as a fact-checker. During the publication process for 1619, Harris “vigorously disputed” the idea that the American Revolution was actually about preserving slavery. Nonetheless, there it was in print come August 2019.

While Harris cautions that some conservatives are too quick to call the whole project a wash, she is among a handful of American History academics ringing alarm bells that the project should issue corrections. These calls also come as several public school systems signal their intent to add 1619 to their curriculums.

Written by journalists and opinion writers, the project attempts “to reframe the country’s history” by suggesting America’s “true founding” was when the first slaves arrived in 1619.

Within days of its launch, multiple top historians pointed out glaring factual inaccuracies. Their concerns, however, went largely ignored, save for one response from NYT editor Josh Silverstein essentially dismissing a letter sent by five such historians.

The historians persisted, turning to op-eds and the World Socialist Web Site to urge the publication to take a second look at some of its reporting. Historian Gordon Wood, a professor at Brown University, even sent a follow-up letter to Silverstein, giving the editor-in-chief permission to publish.

“In the long run the Project will lose its credibility, standing, and persuasiveness with the nation as a whole,” Wood wrote in the letter, which urged the publication to issue corrections. This letter, previously obtained by the Daily Caller, was never published by the NYT.

In the meantime, the “1619 Project” had quickly begun to infiltrate American public schools, spreading from New York to California – complete with all of the inaccuracies the historians spent months pointing out.

“The schools can say they’re not responsible, and they can turn to the parents and say you’re not responsible,” Bob Woodson, founder of The Woodson Center and the “1776” initiative, which is aimed at rebutting the NYT 1619 Project, told the Daily Caller. “None of us are responsible for their failures. As long as they can keep attention riveted in some unseen forces resulting from institutional racism … then, they don’t have to answer the question: Why are black children failing in systems run by their own people?”

Woodson has been a leader in the black community for decades, working to help communities improve and thrive.

“It’s obvious from the response you’re getting that the public schools are just embracing this curriculum coming from ‘1619’ and allegedly it’s being done to assist in improving the learning of students,” according to Woodson.

“I think the fact is that all of the attention of 1619 is on external causes of black dysfunction, and rather than inspiring students to achieve, it’s providing the school system with another excuse for their failure. If they can convince parents and students that the reason that they’re underachieving has to do with some distant problem 250 years ago, then it exempts anybody from any responsibility to solving the problem.”

Along with Chicago Public Schools and Buffalo Public Schools districts, the Daily Caller reached out to multiple individual schools within the district. Not a single school responded.

“We can certainly see a need for teaching students from multiple perspectives and the 1619 provides for our students with a diversity of thought on the topic and a curriculum of inclusion,” Buffalo Public Schools’ associate superintendent Fatima Morrell told the Daily Caller.

“As we teach about the existing impact of status quo inequalities today, the 1619 Project provides a great addition to the standing curriculum.”

Buffalo Public Schools began its implementation with “an initial roll-out with all 11th and 12th graders in the District receiving a copy of the magazine and engaging in activities from the podcast on ‘The Idea of America’ and lessons from the Pulitzer Center,” Morrell said.

Lesson plans are already underway within the district, and teachers will be trained “at various points throughout the rest of this year.”

“Principals, teachers, and students have expressed strong interest in the readings as the legacy of enslavement, and an accurate depiction of the atrocities of the institution of slavery have never been taught before,” according to Morrell. “There is a lot of interest, especially among students.”

“The very premise of the 1619 Project, in fact, is that many of the inequalities that continue to afflict the nation are a direct result of the unhealed wound created by 250 years of slavery and an additional century of second-class citizenship and white-supremacist terrorism inflicted on black people,” Silverstein wrote.

“The rampant discrimination that black people continue to face across nearly every aspect of American life suggests that neither the framework of the Constitution nor the strenuous efforts of political leaders in the past and the present, both white and black, has yet been able to achieve the democratic ideals of the founding for all Americans,” he concluded.

Woodson said that the implementation of the NYT project among high schools around the country is “the most disastrous thing” he has “seen in the last four decades.”

“It can have devastating impact,” Woodson said. “They’re already underperforming, and now rather than introducing into this population a set of ideas that will inspire them, to say to them that ‘you can achieve regardless of the circumstances into which you were born.’ What they’re doing is just the opposite – they’re saying to them, ‘you’re not responsible for any unfortunate or negative outcomes because you live in a racist society that does not like you and is hostile to your interests.'” 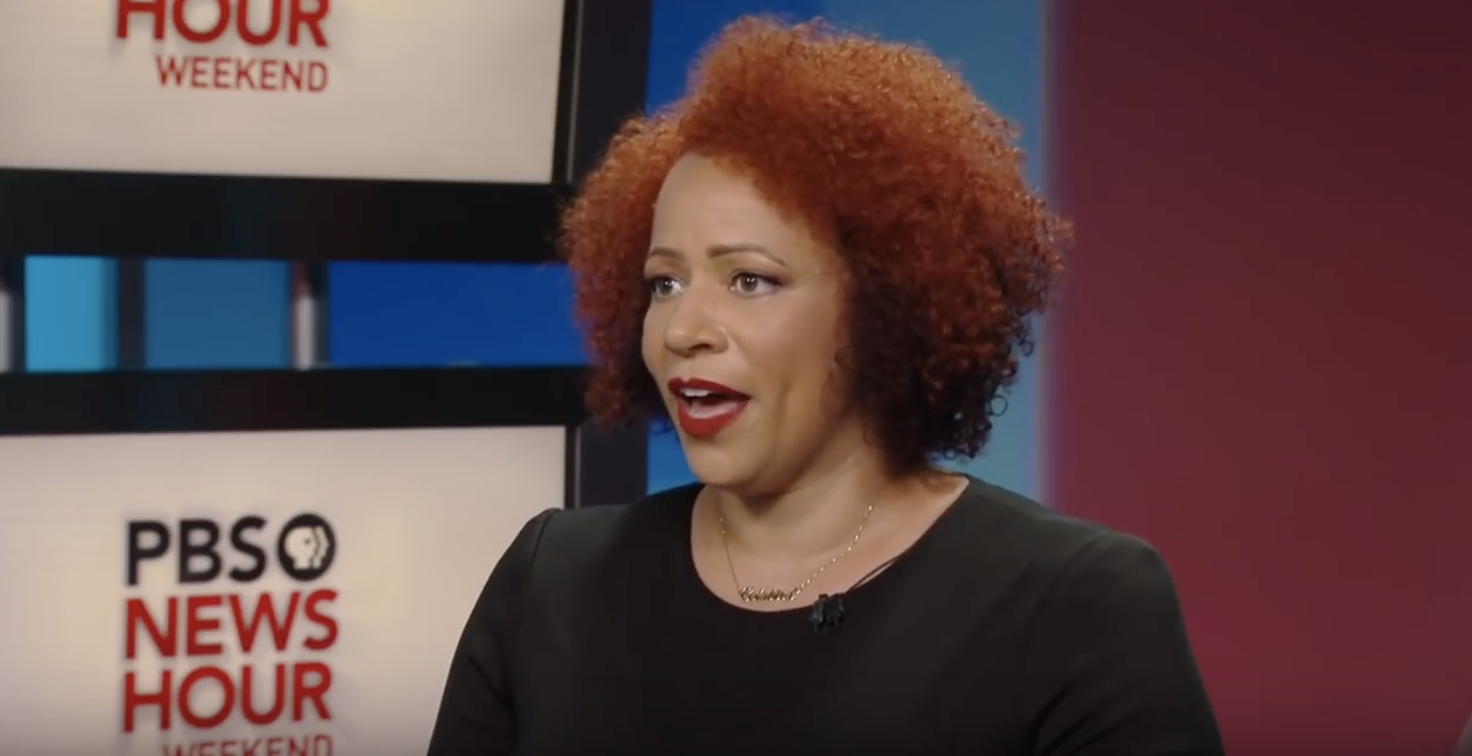 Buffalo Public Schools added that they “want our students to know the basis for these racial inequalities we experience today.” The school district decided to add the project “as another perspective on the legacy of enslavement, and as a missing enzyme in the current mandated curriculum,” the superintendent said.

“We believe that students will do better academically if they know the true history of enslavement and will be able to appreciate the historical brilliance of black people who overcame so much oppression and dehumanization under the institution of chattel slavery, we see it as an emancipation curriculum for all students,” Morrell told the Daily Caller.

“This is a story that is not told from the perspective of people of color in our curriculum, so the NYT has provided for us an alternate, and more accurate perspective.”

The school district declined to directly address the concerns of critical historians. The superintendent noted that the new curriculum “raises the voices of the historically marginalized and disenfranchised.” Morrell said that Buffalo Public Schools is a district “that is approximately 80% of color,” making the addition important.

“It did not replace traditional eurocentric history lessons we currently teach, we added this alongside it as another perspective from experts in the field,” according to Morrell, who did not mention that the project is written by opinion writers and journalists, not historians.

James M. McPherson, a professor at Princeton University and one of the historians who wrote the concerned letter to the NYT, told the Daily Caller that they have all been “frustrated” by the publication’s response. He added that he is “concerned” that public schools are now teaching future generations history based off the “1619 Project.”

“My colleagues and I have been frustrated by the main theme in the NYTimes’ response to our critique that our differences with the points made by the authors (particularly in the introductory essay) of the 1619 project concerned matters of interpretation, not facts, while most of our objections to the project concerned factual matters,” McPherson told the Daily Caller, “not interpretations concerning the positions of the leaders of the American Revolution on slavery, the important role of white abolitionists and civil rights activists in campaigns for freedom and civil rights, and the evolving actions of Lincoln and congressional Republicans against slavery during the Civil War.”

The historian also said that he hopes the critiques addressed numerous times will “have alerted teachers” to the issues. (RELATED: ‘It’s Embarrassing That The New York Times Is Doing This’: Conservatives React To The NYT ‘1619 Project’)

“I’m concerned, but I hope that our critiques might have alerted teachers who use the material to provide balance in their own critical use of it and to point out errors of fact as well as possible biases in interpretation,” McPherson said.