Democratic Minnesota Rep. Ilhan Omar on Tuesday said it is “racist” to refer to COVID-19 as the “Chinese Coronavirus” in a response to the House GOP leader making such a distinction.

GOP House Minority Leader Kevin McCarthy on Monday tweeted a link to a Centers for Disease Control webpage that provides detailed information about the COVID-19 virus that is spreading across the country.

“Everything you need to know about the Chinese coronavirus can be found on one, regularly-updated website,” McCarthy wrote in his tweet.

The CDC provides readers with a treasure trove of information, including categories such as “What You Should Know,” “Situation Updates,” and other general information. 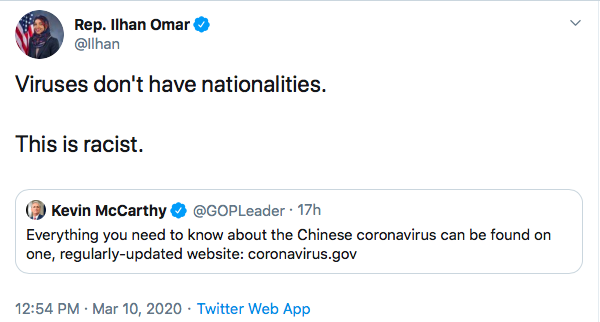 “Viruses don’t have nationalities,” the first-term congresswoman declared. “This is racist.”

Omar took issue with the fact that McCarthy was using a description that connected the virus to China — where the disease first originated. Omar is far from the first individual to cry foul at such geographic-centered nomenclatures for COVID-19.

“Also, calling #COVIDー19 the Wuhan Virus is an example of the myopia that allowed it to spread in the US. The virus is not constrained by country or race. Be just as stupid to call it the Milan Virus,” California Democratic Rep. Ted Lieu said Sunday, also in response to Gosar.

However, there is a long history of naming diseases after the location in which they first originated.

For example, the West Nile virus is named after the region where it first emerged in the 1930s — the West Nile district of Northern Uganda. MERS, a well-known condition by a virus that first emerged in 2012, stands for Middle East Respiratory Syndrome. (RELATED: Ilhan Omar Continues To Dump Big Bucks Into Alleged Boyfriend’s Firm)

Additionally, there was the Spanish Flu that swept the entire glove in the early 20th century, killing millions.

COVID-19 was first identified in late 2019 in Wuhan, a populous city located in inner China. It has since spread to most areas of the globe, including the U.S.