A Missouri lawmaker said he has never experienced so much”vitriol” and “hate” as he has faced after introducing a bill against drag queens reading to children in public libraries.

The lawmaker told the Daily Caller News Foundation that he has received thousands of emails from people roused by the political action committee “Every Library” and received death threats over social media.

Here’s the world we live in today. Try to protect children from age inappropriate content in our libraries and in response get death threats. It seems we no longer live in a society where you can have civil discourse about ideas. #Isaiahfivetwenty #HB2044

The bill also would require libraries to institute parental review boards elected by the community — none of whom would also be members of the public library. These parental review boards would determine whether any sexual material offered by the library is “age-inappropriate sexual material” and convene public hearings to help the community determine whether this material is suitable.

Library personnel who “willfully neglect,” willfully violate or refuse to follow these rules could be punished by a fine of up to $500 or imprisoned in the county jail for no more than a year.

What Is Drag Queen Story Hour?

The events are designed to be about 45 minutes long for children aged 3 to 8 years and intended to capture children’s imagination and help them explore gender fluidity through “glamorous, positive, and unabashedly queer role models.” (RELATED: How Drag Queen Story Hour Expanded Across America)

The official Drag Queen Story Hour website boasts more than 45 independently operated chapters across the U.S., including in New York City, D.C. and Chicago, as well as two international chapters in Tokyo and in Berlin.

The American Library Association has also backed the movement and offers a plethora of resources on its website “to support libraries facing challenges.” A spokeswoman told the DCNF in a January statement that the ALA “strongly supports the rights of libraries to host whatever programming they decide fits the needs and interests of their communities.”

Backlash: ‘The Vitriol And The Hate’

Baker called the backlash that has stemmed from his bill “unprecedented,” and pointed out that media coverage of his bill has been mostly negative. Media outlets initially portrayed the legislation as a bill that seeks to ban “inappropriate books” rather than banning Drag Queen Story Hours from public libraries.

“We are deeply concerned by Missouri House Bill 2044, ‘Parental Oversight of Public Libraries Act,'” Every Library wrote in a statement after Baker introduced the bill. “It sets up quasi-governmental tribunals that circumvent the normal way libraries review materials challenges and imposes fines or jail time on librarians who violate the act. It’s a bad bill and needs to be stopped.”

“When you take on some of these issues that are controversial, the push back from media and from even the American Library Association, you know, was astounding,” Baker told the DCNF. “I got thousands of emails, I’ve had death threats for me and my family.”

The @ALALibrary is purposefully pushing #DQSH events. They don’t want the public to know what is going on at these events in our taxpayer funded libraries. This is a problem. https://t.co/xUeh1rwmRX

“I’ve taken on some controversial issues in my time in public office, but this one has by far been the worst when it comes to the vitriol and the hate that we have received for doing this,” he added.

The lawmaker provided the DCNF with several photographs of hateful messages he has received on social media. In one of these, a Facebook user commented on a Baker family photo and called the family a “bunch of repulsive swines.”

“Fucking diseased pig and his disgusting inbred little piglets,” the user commented. “Hope you all die a slow and painful death.”

“Dear Rep. Baker,” stated a note Baker said was signed by librarians in St. Louis City and County, which he provided to the DCNF, “Please just STOP it with your imbecile proclivities.”

A friendly note of inclusive tolerance of all views from “All librarians” at the St. Louis City and County Libraries.
In other words their desire is to censor the freedom of speech and any opposing views. Such blatant hypocrisy! #Hb2044 pic.twitter.com/j8GGzfBihP

The St. Louis County Public Library did respond to a request for comment from the DCNF regarding the note. 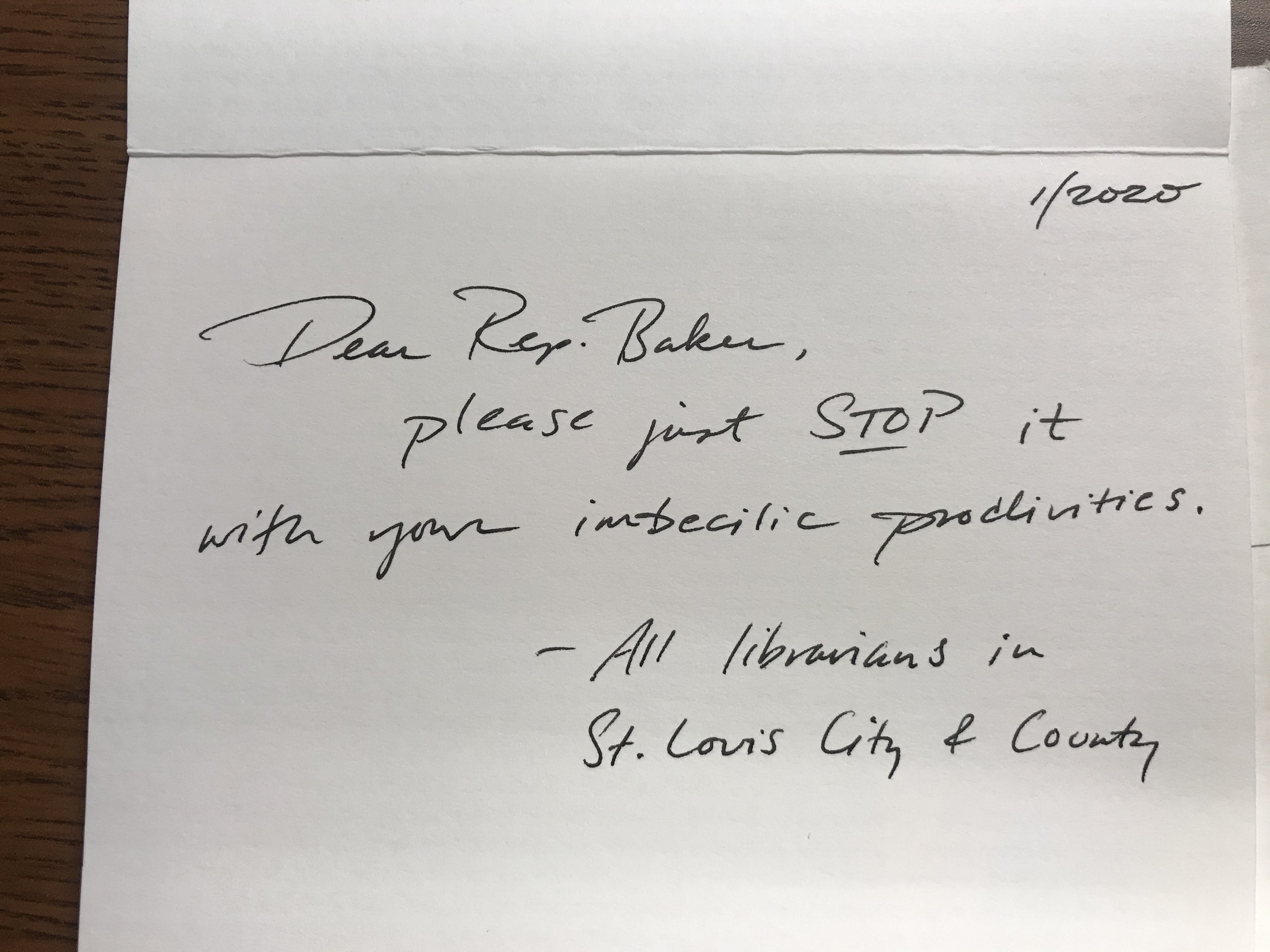 The Story Behind The Bill

Baker said he noticed stories coming out about Drag Queen Story Hours while he formerly worked in city government before he became a state representative in 2018. These stories included instances where sex offenders were allowed to perform in front of children or students as well as instances of “inappropriate touching,” he said.

He began researching and digging into the history of Drag Queen Story Hour, attempting to find a way to “address this problem,” he said. But the deeper he searched the more he began to realize that the American Library Association policies are “largely a part of the problem.”

The ALA hands down these policies to state library associations, and then libraries will often “unquestionably” adopt these polices, Baker said.

“I’m a big advocate for children,” he said. “I have four daughters. I’m a conservative. I’ve taught at a Bible school for eight years, you know, I have a very conservative background and even a background in ministry.”

“It’s an issue of protecting our kids from what I believe is a concentrated effort to push the LGBTQ agenda onto our children,” he said. “Even worse than that, subjecting them to unwanted advances by people that I believe have nefarious intentions for children. And that’s my concern.”

Baker said he did not wish to infringe on people’s First Amendment rights in constructing the bill, so he examined court precedent in regard to a Supreme Court decision when it came to internet filters on library computers, a case involving a lawsuit against the American Library Association.

“The Supreme court basically said it’s not infringing on first amendment rights to have filters on library computers in a public area funded by taxpayer dollars,” Baker said. ” So I thought, what’s the difference between that and the rest of the content in the library or events at libraries? I think the same principle should apply.”

Drag Queen Story Hour and the American Library Association did not respond to requests for comment from the DCNF.