The coronavirus pandemic dropped into America’s lap at a major inflection point in the 2020 election.

The spread of the disease will likely have different impacts for President Donald Trump, former Vice President Joe Biden, Independent Vermont Sen. Bernie Sanders, and the American electorate. The White House’s coronavirus task force has indicated that everyday life will be disrupted for the next six to eight weeks, so here’s a look at how each of the aforementioned four will be faring post-COVID-19. (RELATED: Surgeon General Jerome Adams: ‘We Could Be Italy’ If People Don’t Start Taking Social Distancing Seriously)

The most direct impact coronavirus will have is on the actual mechanics of casting votes. The latest guidance from the Centers for Disease Control and Protection (CDC) strongly urge against gatherings of more than 50 people for the next 8 weeks. That classification applies to nearly every polling station in the nation.

So how can people still vote and follow the social distancing guidelines? Let’s take a look at Washington, arguably the state hit hardest by coronavirus, which quasi-prophetically transitioned away from a caucus format to an “all-mail” ballot for the 2020 primary.

Washington voters were provided ballots more than two weeks ahead of the scheduled March 10 voting day and needed to have them post marked or dropped off at a dedicated drop off station by 8:00 p.m. local time to be counted in the results. 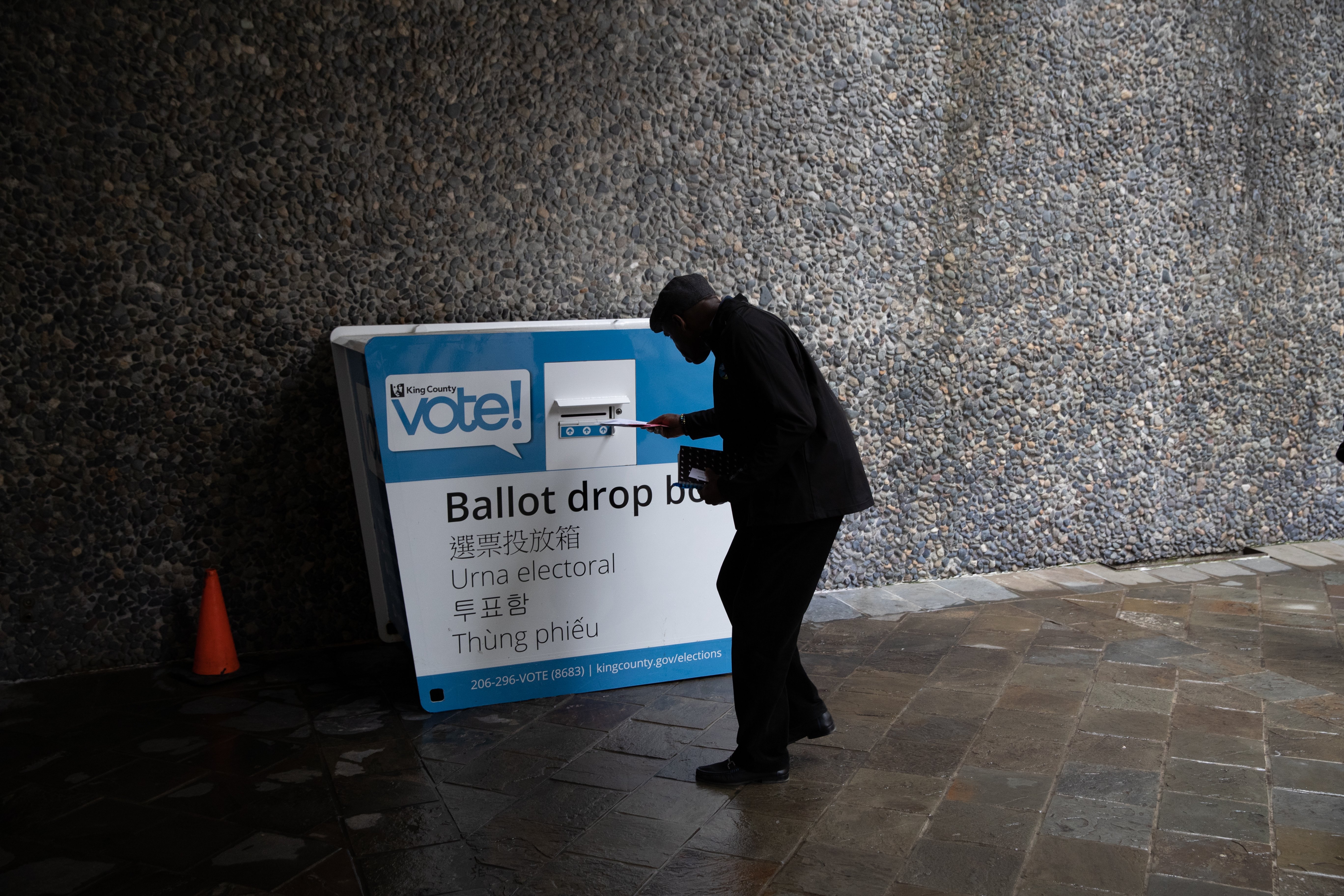 A voter casts his ballot during primary elections on March 10, 2020 in Seattle, Washington. (Photo by John Moore/Getty Images)

Unlike some of the previous states, Washington’s new format seemed like a near-total success, with one exception: the timeliness of returns. At publication time, the state had only reported 94% of all votes nearly a week after voting stopped. Biden currently holds a 2 point lead over Sanders in the state, and the delegate count is not likely to change.

A vote-by-mail realignment is the logical course for allowing votes to be cast while minimizing interpersonal contact in accordance with CDC guidelines. Only four states, Puerto Rico, the U.S. Virgin Islands and D.C. were scheduled to hold their primaries after the timeframe outlined by the CDC, and two states, Georgia and Louisiana, have already postponed their primaries. Still, Arizona, Florida, Illinois, and Ohio are slated to vote this Tuesday, March 17, making a mail-in-vote impossible. In order to make sure voters in the remaining states have the same two weeks Washington residents were allotted to return their ballots, the states would have to send them out immediately.

It should be noted that four other states — Colorado, Hawaii, Oregon and Utah — also conduct “all mail” elections. Sanders won Colorado by more than 12 points.

Sanders was the overwhelming favorite to win the nomination through the first three states, but all that changed after Biden picked up his first ever primary win in South Carolina. After massive victories on Super Tuesday and in the states that voted on March 10, he currently holds a 150 delegate lead over Sanders.

Still, there is an outside chance the pandemic could actually help Sanders regain momentum. The elephant in the coronavirus room is the makeup of each candidate’s base: Sanders has overwhelming support among college age voters and recent graduates. Biden, on the other hand, enjoys the bulk of his support from older voters.

While young people are not immune to coronavirus, confirmed cases among the elderly have a significantly higher mortality rate. Should Biden’s base, fearing for their own health, not turn out to vote, Sanders could pick up enough delegates to prevent Biden from breaching the 1,991 delegate threshold necessary for winning the nomination ahead of the convention. This is especially impactful in a state like Florida, which ranks in the top five for average age of its residents, has one of the largest remaining pledged delegate counts and is a state where Sanders is trailing Biden by massive margins. 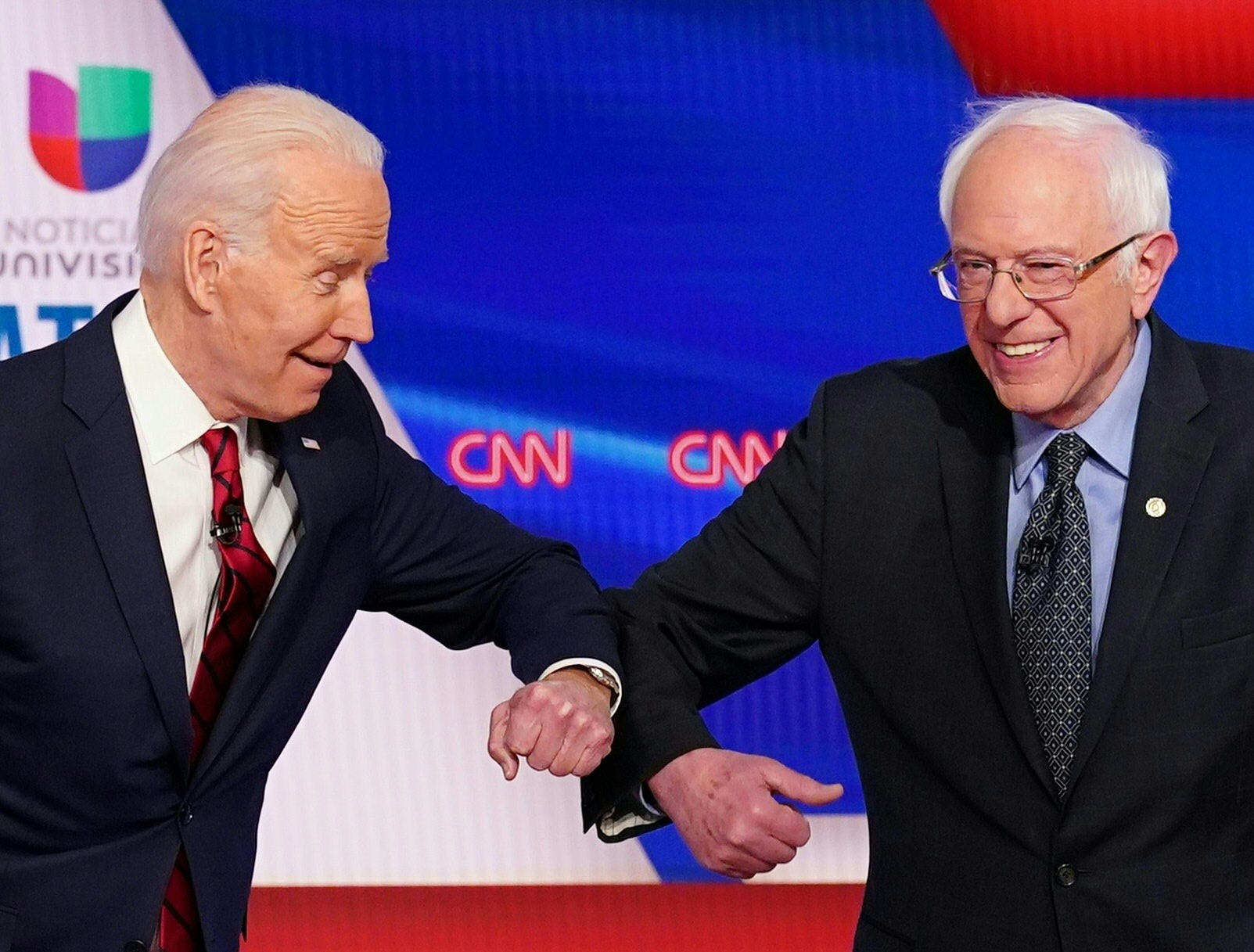 As the chips fall, Biden remains the odds-on favorite to emerge victorious from a brokered convention, and if coronavirus isn’t enough to help Sanders regain frontrunner status, it will at least help him push Biden further to the left on the ideological spectrum.

The longer Bernie is in the race, the harder Biden will have to work to woo Sanders supporters, as they are an integral part of the coalition Biden needs to defeat Trump in the general election. Over the weekend, the former vice president adopted a free college tuition proposal, and during Sunday night’s CNN-moderated debate, he pledged to have a female vice president, nominate the first ever African-American woman to serve on the U.S. Supreme Court, and end deportations for anything short of a felony committed on U.S. soil. (RELATED: Commitments To Female Running Mates Overshadow Coronavirus At One-On-One Biden-Sanders Debate)

Sanders also used the debate as free airtime to point out the underlying flaws in the current health care system and advocate for his own signature proposal, Medicare for All.

The biggest loser in the coronavirus saga is without a doubt the incumbent president, Donald J. Trump.

Just one month ago, fresh off an impeachment acquittal, Trump’s re-election odds peaked. Historic highs in the stock market and unemployment lows among nearly every demographic allowed the president to run on a purely anti-socialist campaign. Don’t forget, this was back when Sanders was still the frontrunner.

Fast forward one month, and the Dow Jones Industrial Average has fallen nearly 10,000 points, and the markets are in serious danger of dipping below pre-2016 election levels. Additionally, much of Trump’s plan to reduce the national deficit, as outlined in his budget for fiscal year 2021, is based on the notion that the economy will continue to grow at a rate of 3% per year, a likely impossible task following coronavirus.

“We are going to be challenged, no question about it. We have a big challenge,” he explained. “I’ve been saying that and I’ll continue to say it.” 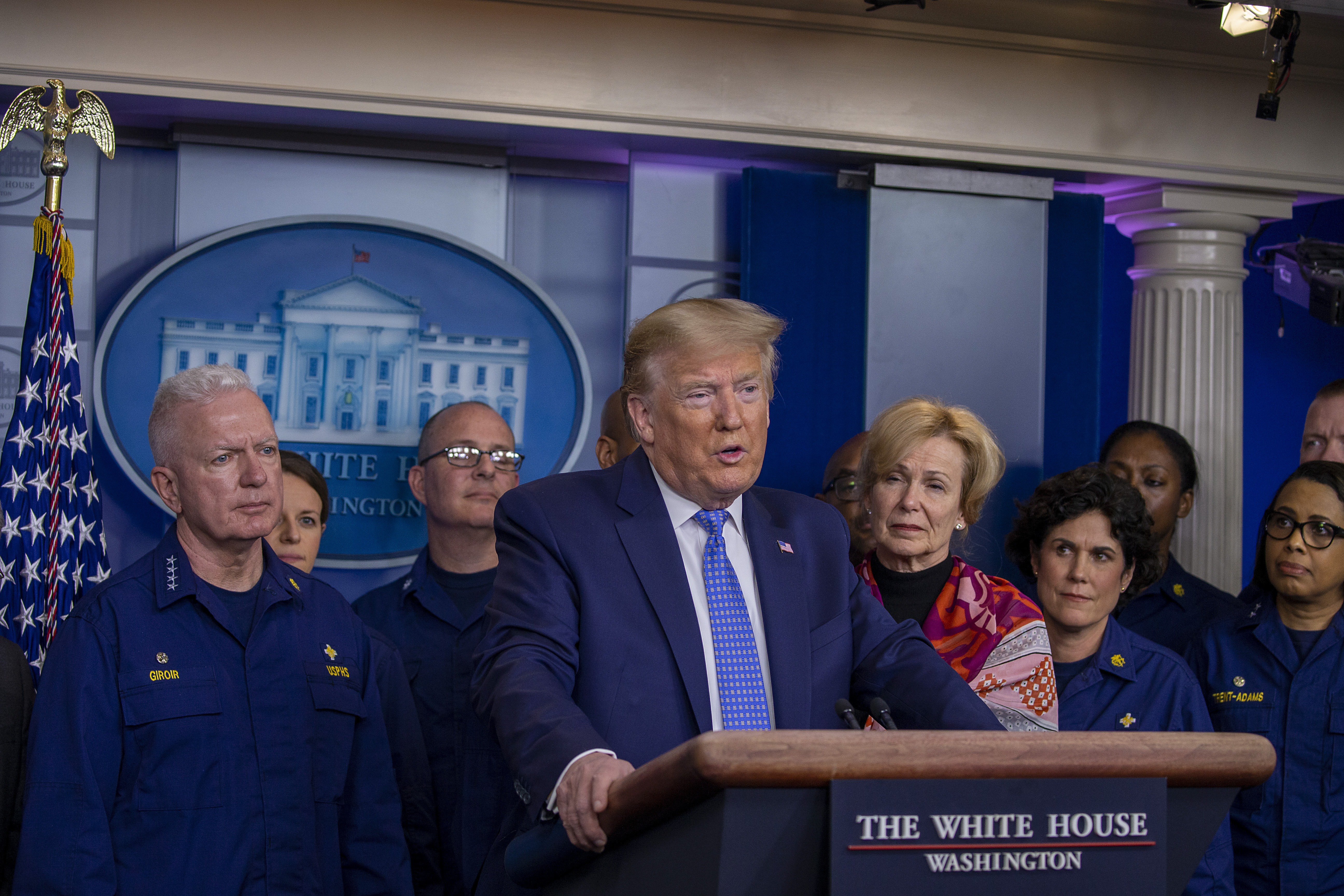 U.S. President Donald Trump speaks to the media in the press briefing room at the White House on March 15, 2020 in Washington, DC. (Photo by Tasos Katopodis/Getty Images)

On top of the economic troubles facing the administration, Trump has to overcome the optics of his initial response. Like Biden, his base skews toward the older end of the voting spectrum. Unless he and the federal government can assure the public they can soon regain control of the situation, Trump could lose his footing in the most rock-solid block of his coalition, and perhaps lose the general in the process.

In recent days, however, Trump has appeared to change his approach to the pandemic.

Just last week, he declared a national emergency, freeing up $50 billion in additional stimulus funds to help combat coronavirus. The president, at the urging of the entire White House coronavirus task force, issued broad travel restrictions for foreign nationals who had recently visited countries affected by the outbreak. Perhaps most importantly, even if not intentionally, Trump picked Vice President Mike Pence to head the task force. Pence’s time spent as a talk radio host served him well, and he has been holding briefings nearly every day to inform reporters of the federal government’s actions and progress in the fight.

All of the aforementioned actions run in stark contrast to Trump’s usual playbook, and only time will tell if it will be enough to help him recover ahead of the 2020 election.