The internet is ablaze with news about how coronavirus has impacted global supply chains. The Wall Street Journal predicted such effects in mid-February, comparing coronavirus to the 2003 SARS outbreak, or the 2011 nuclear disaster at Fukishima, both of which had major disruptive effects on the global economy. Soon enough, Compliance Week announced that top American companies with suppliers in China were beginning to feel the impacts of disruption. Axios reports that “coronavirus has disrupted supply chains for nearly 75% of U.S. companies.” Forbes predicts that the “global automotive industry, which imports more than $34 billion in motor parts from China annually will be significantly impacted.” The list of such reports goes on.

Investors, moreover, are only too aware of the extreme levels of volatility the stock market has displayed in recent weeks. The Federal Reserve attempted to address the situation once by cutting interest rates, and then again by injecting an incredible $1.5 trillion into the stock market with the hope of stabilizing it. Predictably, neither of these measures helped much with anything, besides saving a few rich investors from total losses. On Sunday, the Fed announced that it would both cut interest rates to zero and spend yet another $700 billion in a program of quantitative easing. Immediately, the Dow Futures plummeted despite these massive emergency measures. (RELATED: President Trump’s Effort To Shake Up The Federal Reserve)

Meanwhile, businesses are not the only sector affected by supply chain disruptions. Consumers too are experiencing the concrete effects of supply shortages. The disruptions have led to massive flurry of panic-shopping and stockpiling, emptying the shelves of domestic retail stores, like Walmart and Amazon. Business Insider reports a long list of consumer goods that have skyrocketed in sales, including oat-milk, medical masks, thermometers, and toilet paper. Additionally, both Axios and The Hill report that the coronavirus could drastically affect the supply of about 150 crucial medical drugs — not a favorable circumstance in the midst of a pandemic. 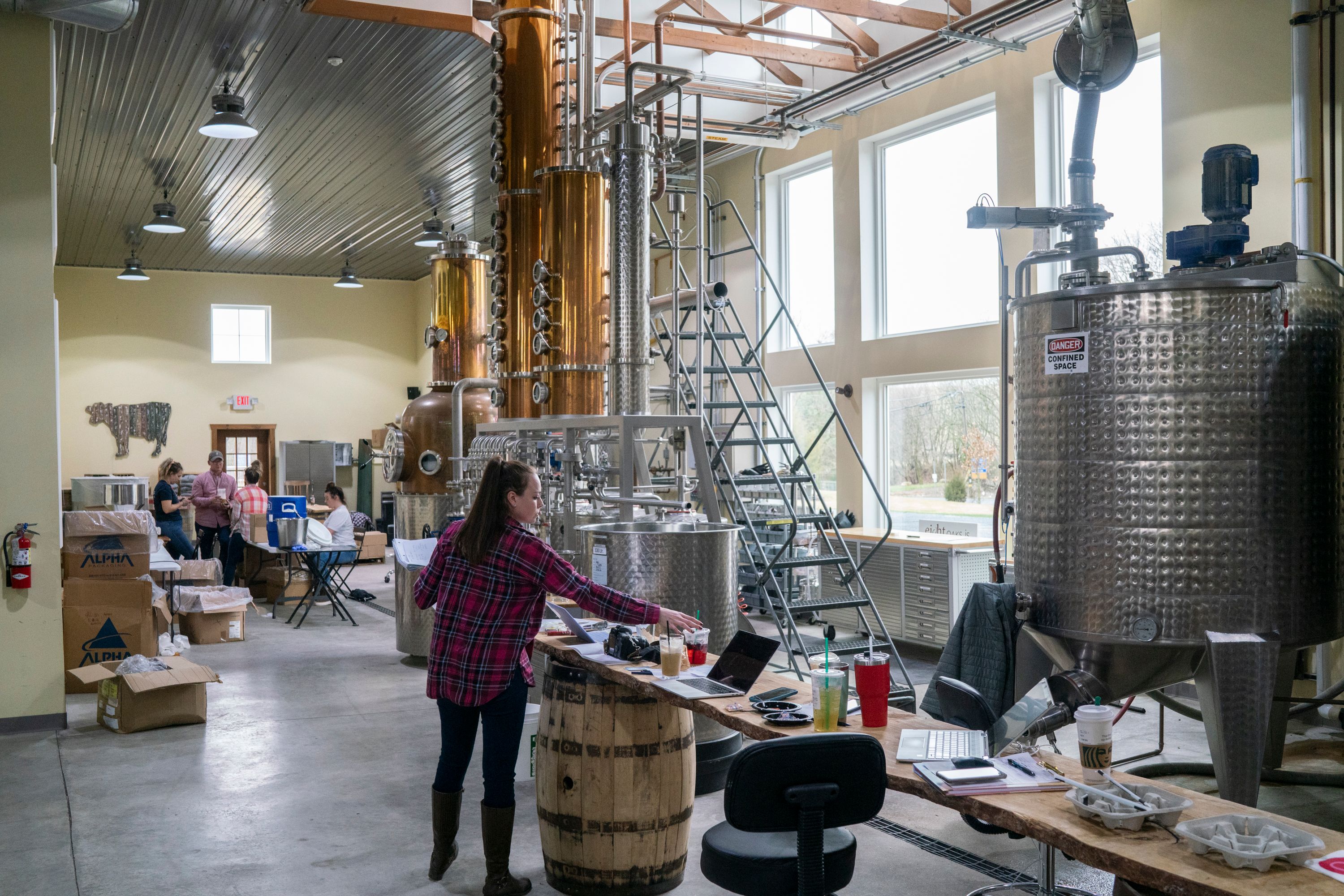 Caitlin Bagenstose works inside the distillery at Eight Oaks Farm Distillery in New Tripoli, Pennsylvania,. on March 19, 2020. – Eight Oaks is one of many distilleries in the US to begin producing hand sanitizer instead of spirits in response to the coronavirus, COVID-19, pandemic. (Photo by BRANDEN EASTWOOD/AFP via Getty Images)

On top of all of this, the widespread implementation of social distancing, encouraged and enforced by the government itself, has forced many businesses to close down, as well as forced millions of workers in all sectors to stay home. All of this has of course been unimaginably bad for the economy.

One wonders how the Fed’s attempts at stimulating the stock market were intended to resolve these more immediate shortages. Will a $700 billion program of quantitative easing automatically restore toilet paper to the shelves of Walmart? Will it suddenly make pharmaceutical products available again to people in need? Will it automatically fix the breakages which have developed in global supply chains? Whom, exactly, is such a stimulus supposed to benefit directly? Will the “trickle-down economy” fix these problems? Note that these questions remain even when the stock market numbers go back up. (RELATED: Supply Chain Expert Tells Tucker What Coming Shortages Americans Should Know About, And It’s Not Toilet Paper)

In the midst of all this flurry of reporting, predicting, stimulating and panic-shopping, the obvious conclusion seems to be: America needs an industrial policy. In other words, America needs the firm hand of the state to guide American businesses in allocating their financial resources in the most productive and socially advantageous way possible.

Indeed, this seems to be the conclusion which the Trump Administration is finally reaching, in some form, in response to the coronavirus crisis. On Tuesday, Secretary of the Treasury Steve Mnuchin announced a massive fiscal stimulus package — in the area of $1 trillion — which includes loans for businesses affected by the coronavirus, as well as the possibility of $1000 checks to be sent out to American adults as relief during this national emergency. This latter possibility — essentially a proposal for temporary universal basic income — had been suggested earlier by Sens. Mitt Romney and Tom Cotton.

On Wednesday, President Donald Trump announced he would be invoking the “wartime powers” of the Defense Production Act, which allows the president to force private companies to manufacture the materials and supplies needed during this time of crisis, such as ventilators and medicines, etc. Subsequently, the Senate passed a bill covering the first part of this stimulus plan, which would expand paid leave for workers in small businesses as well as unemployment insurance. Republicans are now discussing with Democrats the additional possibilities of banning stock buybacks, as well as the possibility of the federal government taking equity stakes in American corporations — a form of state ownership. 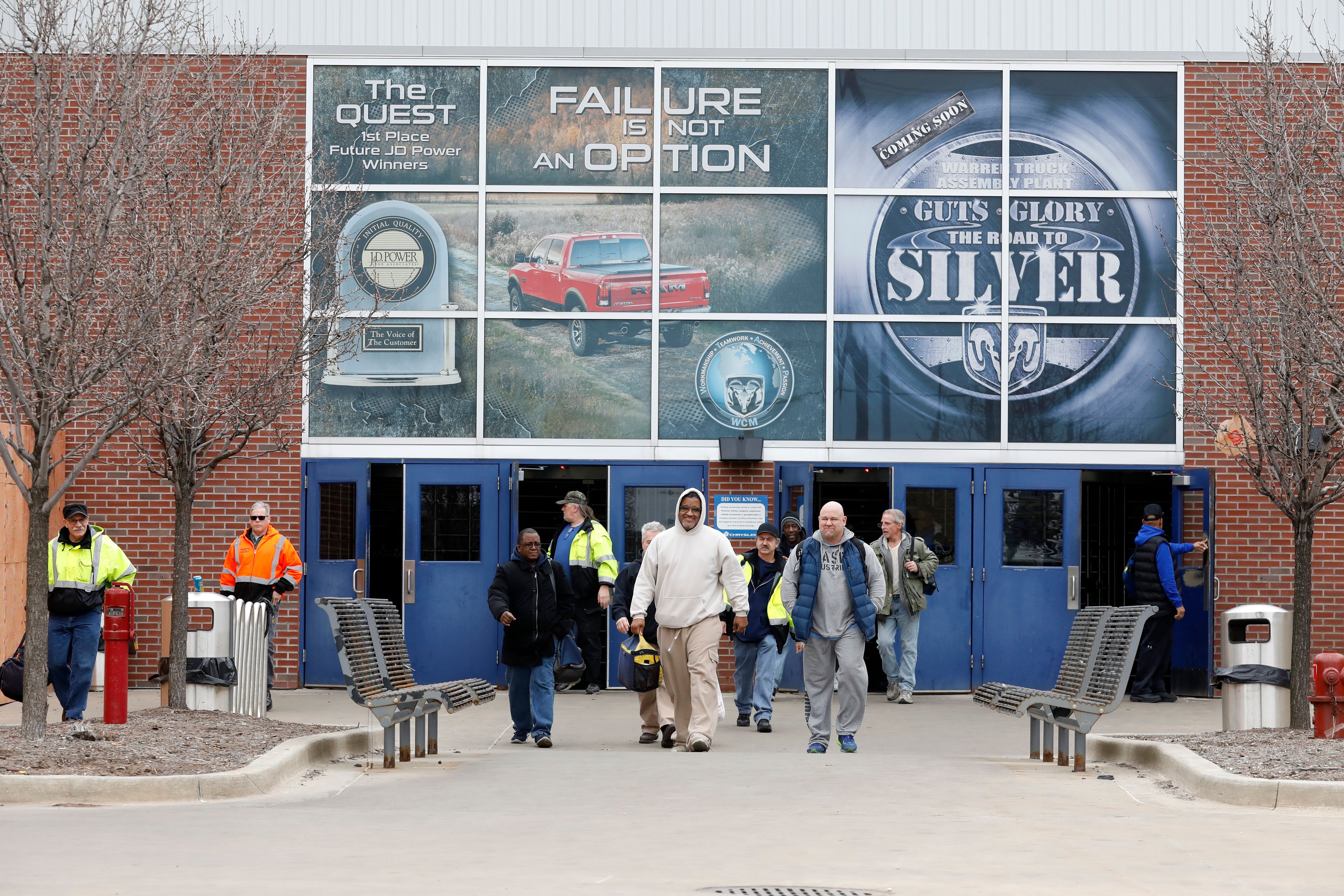 Workers leave FCA Chrysler Warren Truck Assembly after the Detroit three automakers have agreed to UAW demands to shut down all North America plants as a precaution against coronavirus, on March 18, 2020 in Detroit, Michigan. (Photo by JEFF KOWALSKY/AFP via Getty Images)

These are all remarkable measures, of a scale not seen since World War II, which in large part amount to a form of industrial policy: using the firm hand of government to make choices concerning the allocation of economic resources, with an explicit view to stimulating domestic productivity and securing the national good. This is a significant turnaround for Republicans especially, who might have dubbed such measures “socialism,” “welfare” or “entitlements” in the past.

Until recently, practically the only politician calling for the nation to adopt a comprehensive industrial policy was Sen. Marco Rubio. Rubio sees the effects of the coronavirus as confirmation of his position that the United States’s reliance on China for the production of cheap consumer goods, as well as its lack of investment in the real economy, may spell disaster for the economy. Responding to the disruption in supply of pharmaceutical products from China, Rubio has issued a plan to combat U.S. dependence on China and re-direct the American economy to domestic production of pharmaceuticals. This plan includes government financing for small U.S. businesses engaged in such production. Rubio’s plan is also being considered by the Senate as part of the negotiations for its fiscal stimulus plan. (RELATED: Sen. Rubio: America Is Coming Apart — Here’s How We Start The Revival)

Such measures are necessary to stimulate domestic productivity and national self-reliance. That such policies have not been normally implemented for the last several decades in the U.S. (the decades which are dubbed the “neoliberal” era) is the root cause of the economic crisis which the coronavirus has unleashed. It is a promising sign that the Republican Party, traditionally so opposed to massive government spending or public regulation of the private sector, is now beginning to push for such measures.

Nor are such measures fundamentally un-American, as Jeffersonian neoliberals of the right might insist. The founding of a national bank that would provide financial stimulus to productive activity, especially manufacturing, was among the foremost of Alexander Hamilton’s economic policies when he served as Secretary of the Treasury under George Washington. Moreover, as Matt Stoller reminds his readers, World War II was won largely thanks to the Reconstruction Finance Corporation, founded in 1932 under President Herbert Hoover to provide lending services for the development of military technology. Franklin D. Roosevelt’s New Deal was implemented on the basis of such government-funded programs, to the great advantage of the American people. 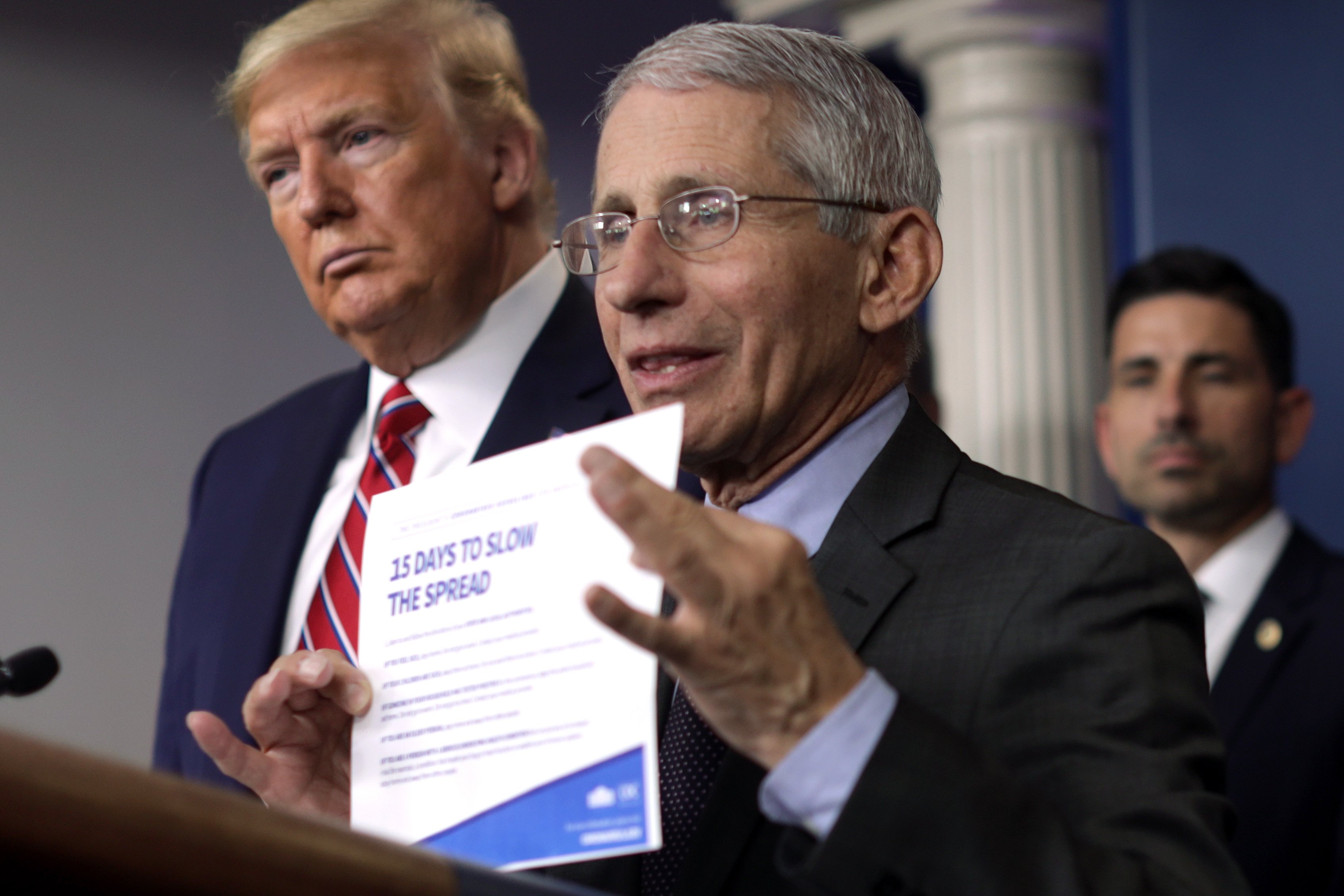 Director of the National Institute of Allergy and Infectious Diseases Dr. Anthony Fauci holds up the “15 Days to Slow the Spread” instruction as U.S. President Donald Trump looks on during a news briefing on the latest development of the coronavirus outbreak in the U.S. at the James Brady Press Briefing Room at the White House March 20, 2020 in Washington, DC.  (Photo by Alex Wong/Getty Images)

Countries outside the U.S. which have adopted a similar approach to finance and industrial planning have routinely proven that such measures redound to the benefit of society. South Korea under the regime of Park Chung Hee engaged in a series of measures, including the establishment of state-controlled investment banks, which were aimed at building the nation’s massive industrial capacity. Park Chung Hee himself was only imitating the post-war industrial planning of Japan, which had allowed Japan to gain a significant competitive advantage even over the post-war U.S. in various manufacturing sectors. Finally, patriotic Americans can no longer ignore that the rise of China to the rank of a formidable superpower can only be attributed to its own comprehensive industrial planning, which has been studied in detail by economists from Marco Rubio’s team, as well as by the economist William Lazonick. The maximum of American industrial capacity can only be maintained by an industrial policy of similar proportions. (RELATED: The Threat From China Means Conservatives Must Rethink Industrial Policy)

The era of neoliberalism has been characterized by a too-great faith in the efficacy of markets. Laissez-faire markets uninhibited by central planning have not redounded to the public advantage. One does not need to be a left-wing socialist to see this. It is not only specific classes, such as workers, who have been unfairly treated by the invisible hand of the market; it is also entire nations that have suffered, often as the result of their own decisions — or indeed, by their refusal to make decisions. Ever since China entered the World Trade Organization, the apparent agnosticism of U.S. policy-makers towards making economic decisions for the public good has resulted in the offshoring of production to China — not to mention the increased illusion of American wealth, buttressed by a bloated and unproductive financial sector.

The wealth of America has indeed been proven all but illusory by the crisis of scarcity which the coronavirus has unleashed, a scarcity which would not have existed if the American government still had a robust commitment to its industrial base. The shock of the coronavirus should be a wake-up call to America’s leaders. It is refreshing to see the Trump Administration stepping up to the plate. Not all of the measures currently being adopted may be perfect, but it is certainly a step in the right direction.

Jonathan Culbreath (@maestrojmc) is a high-school teacher and expecting father who lives with his wife in Southern California. He is an assistant editor at The Josias, an online compendium of Catholic Social Teaching.