“Here she is tonight, in public, pretending not to hate Catholics,” he said.

Monocles popped out in shock, well-heeled attendees and the media harrumphed in derision, and Trump once again provoked the most elitist outrage not by saying things that were false, but by daring to point out something that was probably true. (RELATED: Flashback: Trump Roasted Hillary At Al Smith Dinner Last Year [VIDEO])

Such an explosive charge will be more difficult for Trump to level at his presumed opponent in 2020, former Vice President Joe Biden. The erstwhile senator from Delaware is Catholic, albeit in the mold of Nancy Pelosi or the late Ted Kennedy — but more on that presently. 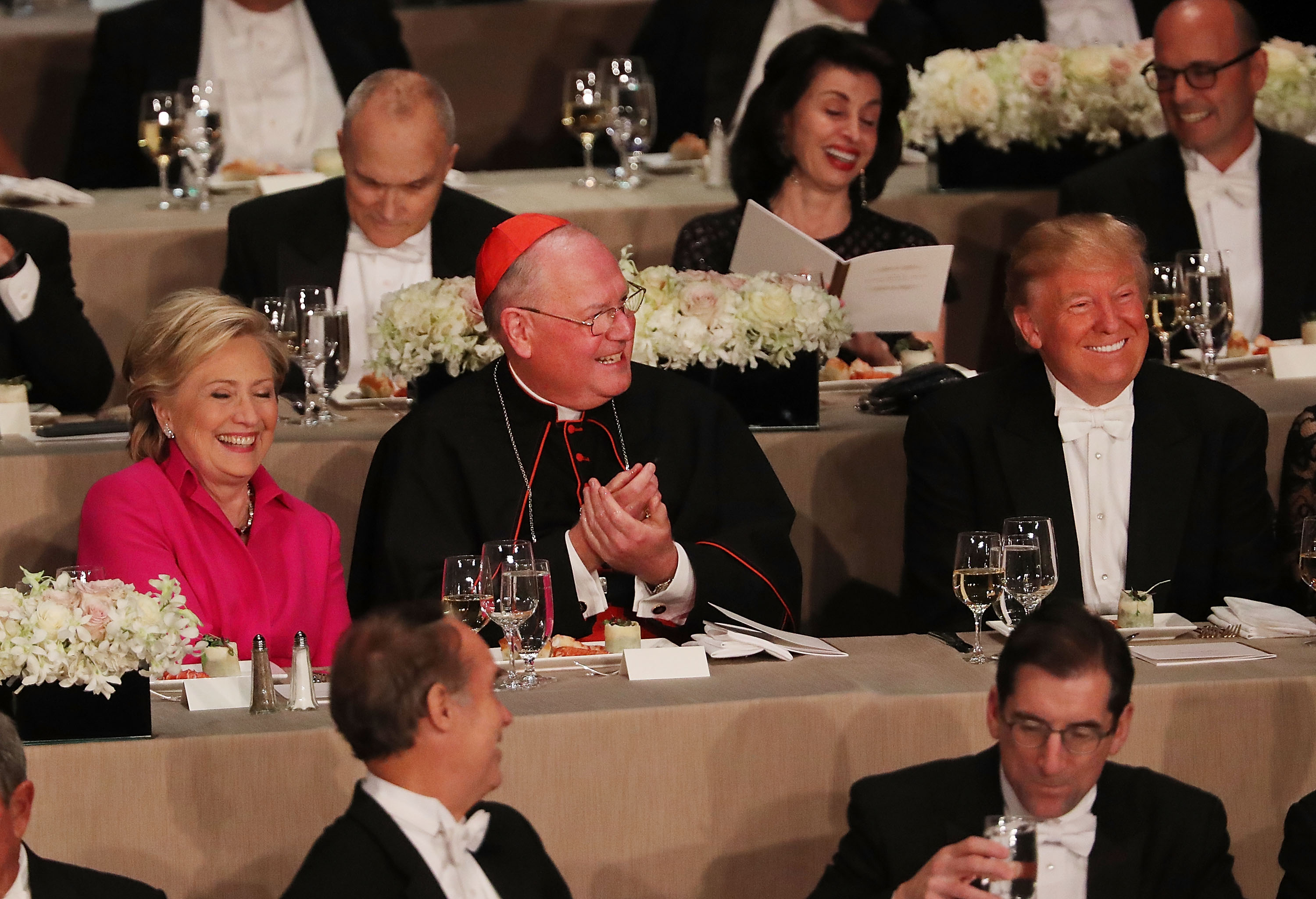 Assuming he clinches the Democratic nomination, Biden would be the fourth Catholic presidential nominee of a major U.S. political party, his predecessors being Gov. Al Smith in 1928, Sen. John F. Kennedy in 1960, and Sen. John Kerry in 2004, all Democrats hailing from Northeastern states. If Biden were to win the general election, he would be only the second in history to do so.

At one time, a Catholic running for the nation’s highest office was such an affront to a culturally Protestant America that it could sink a candidacy. Public suspicion of Al Smith’s faith was considered problematic enough to be counted among “The Three P’s” that doomed his campaign: prohibition, prejudice and prosperity.

Kennedy, determined that his Catholicism should present as little of a stumbling block in his professional life as it did in his private affairs, preempted such attitudes in his Address to the Greater Houston Ministerial Association. He assured the country that no pope would be whispering instructions in his ear, while somewhat gratuitously adding his opposition to the very concept of an Ambassador to the Vatican and funding for parochial schools. The speech worked, and Kennedy avoided Smith’s fate. (RELATED: Trump’s JFK Document Release Won’t End The Conspiracy Theories)

Fast-forward 60 years: Biden seems to have avoided making Catholicism a key part of his public image during the campaign so far. There are a few possible explanations for this that are not mutually exclusive.

First, it could be that the electorate simply doesn’t care, and the Democratic base would happily elect a Wiccan if he was reliably opposed to the dreaded Russian Nazis whom MSNBC and CNN have spent three years claiming to occupy the White House. 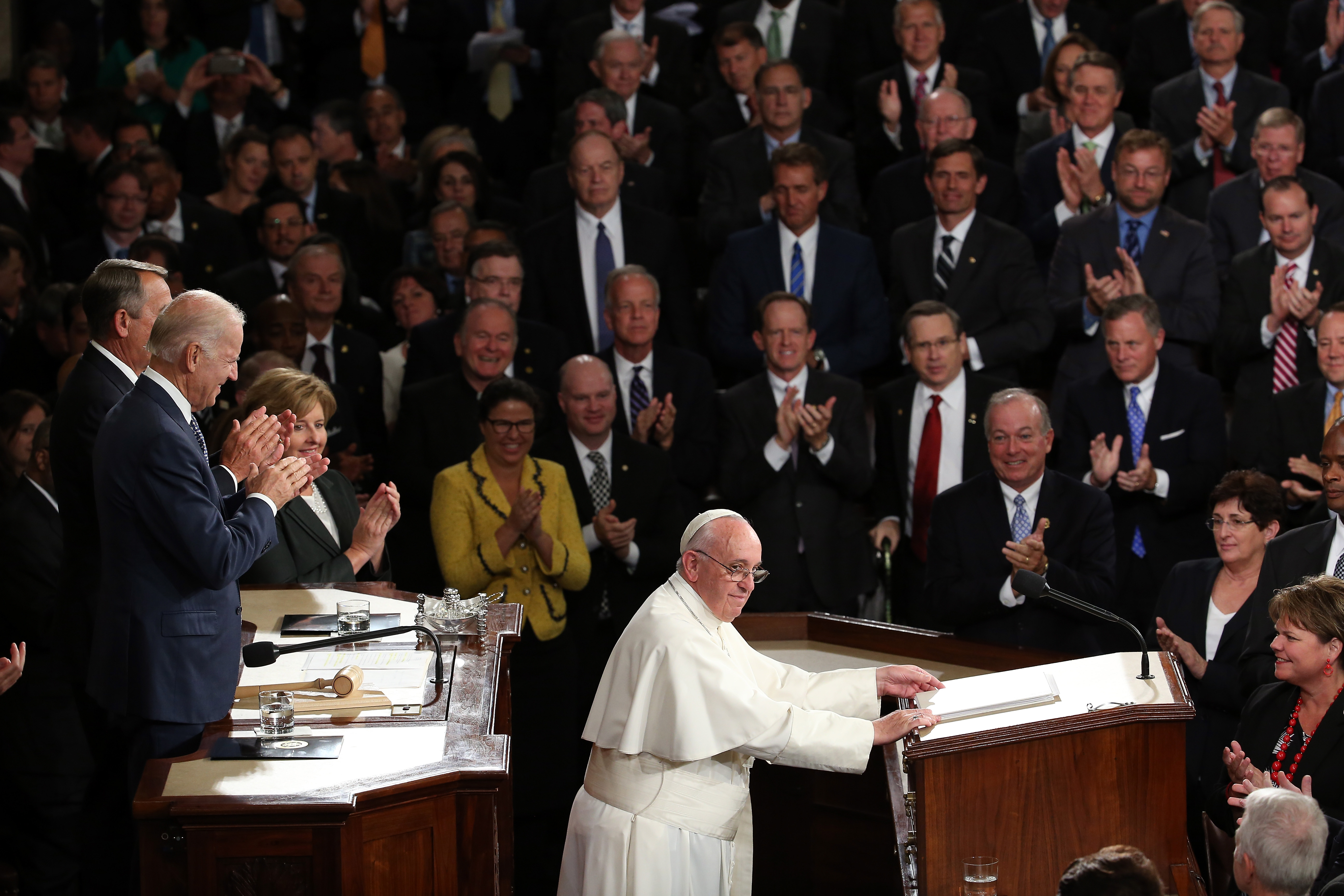 Vice President Joe Biden and Speaker of the House John Boehner (R-OH) applaud Pope Francis after his speech in a joint meeting of the U.S. Congress in the House Chamber of the U.S. Capitol on September 24, 2015 in Washington, DC. (Photo by Win McNamee/Getty Images)

Indeed, it is difficult to imagine a hypothetical voter siding with Biden purely for reasons of Catholic solidarity who wasn’t already on board for other political and emotional reasons, such as “kids in cages” rhetoric or a general contempt for Trump’s style and character. So why should Biden waste words on religion?

Second, Biden and his caretakers have probably surmised that undue emphasis upon his faith might invite unwanted scrutiny upon how these convictions (or lack thereof) have informed his legislative agenda over the decades.

Biden indulges in the standard Liberal-Catholic-Democrat political script when it comes to abortion, always some variation of “I am personally opposed, but it is not my place to impose my view upon others” — a canard denounced in no uncertain terms by the United States Conference of Catholic Bishops. Biden’s public refusal to accept this particularly serious point of church teaching has occasionally resulted in him being barred from communion, the latest widely reported incident taking place late in 2019 at a parish in South Carolina. It is understandable that Biden would like to keep these embarrassments, and discussion surrounding them, to a minimum. (RELATED: ‘My Personal Life’: Joe Biden Wouldn’t Address Being Refused Communion Over Abortion Stance)

Of course, echoes of the anti-Catholicism of yore might still be heard from time to time in the halls of Congress, more mumbled than shouted. Recall Dianne Feinstein’s bizarre formulation that the “dogma lives loudly within” Amy Coney Barrett, Trump’s successful nominee to the Court of Appeals for the 7th Circuit, or Kamala Harris and Mazie Hirono’s characterization of the Knights of Columbus as a misogynistic, extremist organization for its orthodox stance on abortion and marriage. However, such attacks are typically reserved for conservative judicial nominees who might pose a danger to the holy text of Roe v. Wade, and despite taking heat from the left over his past support for the Hyde Amendment, Biden is unlikely to suffer the accusation of undue devotion to the Catechism in matters of faith and morals.

But enough theory — let us attempt to get a picture of how voting Catholics think.

Exit polls back to 2004 show a majority not only supporting the winners of presidential elections but usually doing that by nearly the same margin as the electorate as a whole. The 2016 election was a slight exception, with Catholics again backing the winner, Trump, but giving him a larger share of their votes than the total body of voters (52% as against 46.1%). — Russell Shaw, Catholic World Report

A survey by EWTN News/RealClear Opinion Research confirms a bit of conventional wisdom: weekly churchgoing Catholics who profess complete belief in church teaching are more likely to vote Republican, whereas their less stringent co-religionists are more likely to lean Democrat.

In the same survey, Trump receives good news: 53% of Catholic registered voters are either planning to vote for him or open to doing so, which means that matching or even improving upon his 2016 showing among Catholics is a possibility. Somewhat confusingly, Biden gets even better news: 52% of such respondents would prefer him in a head-to-head contest with Trump, who only nets 39% of similarly dedicated Catholic voters.

Such disparities serve to reinforce the hard-learned lesson of 2016’s pollsters and armchair prognosticators: surveys might paint a more or less useful picture of political trends, but they cannot capture the full range of human considerations, calculations, and doubts, especially a year out from when Americans enter the curtained privacy of the voting booth. 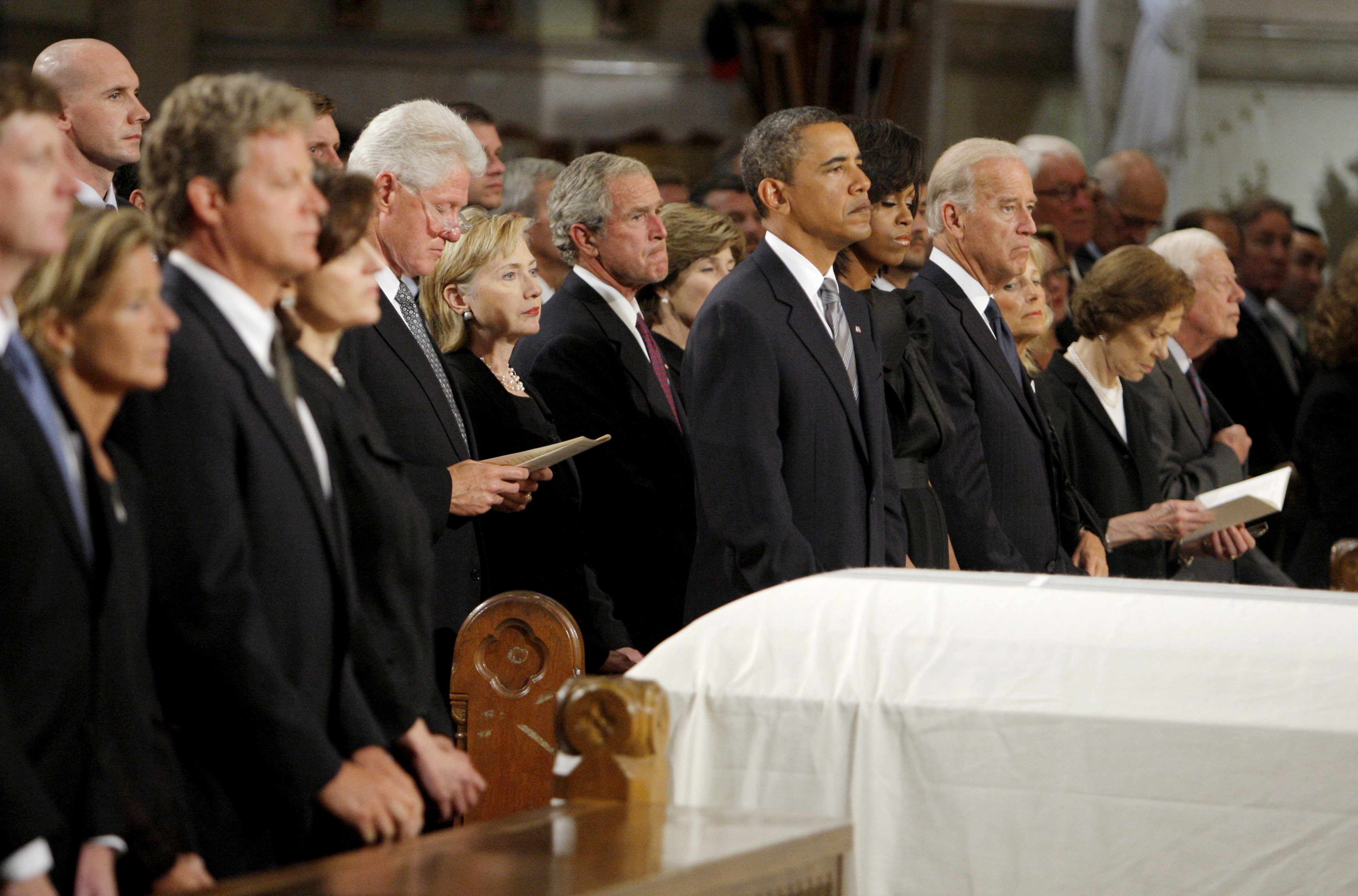 The casket of Senator Edward Kennedy sits between his family. (Photo by BRIAN SNYDER/POOL/AFP via Getty Images)

Moreover, the Catholic population itself is far from monolithic, being divided by important sociological factors other than church attendance. While Trump bested Clinton by a seven-point spread among Catholics in 2016, Catholic-Hispanic voters preferred Clinton by a walloping 41 points. Four years since, pay raises for the troops, tax cuts, a good atmosphere for growing Latino small businesses, and vigorous outreach from the Trump campaign could serve to shrink this gap for reasons unrelated to religious preference.

Another problem with gauging the attitudes of any group on a national scale — Catholic or otherwise — is that it fails to account for the impact these votes will have in the electoral college. How Catholics vote in Rust Belt swing states could be more important than across the nation as a whole.

George J. Marlin, author of “The American Catholic Voter: 200 Years of Political Impact,” investigated this angle in one of the most worthwhile — and unfairly overlooked — post-mortems conducted in the wake of the 2016 election. It turned out that the exact same white, blue-collar, disillusioned Democratic counties that delivered Trump’s victories were also disproportionately the most Catholic. According to Marlin:

Trump carried Ohio with 52 percent, precisely because working class Catholics came out in force. Clinton beat Trump in only three of the top fifteen Catholic counties, and her percentage of the vote in the other twelve counties was significantly lower than Obama’s.

Similarly, Trump bested Clinton in 14 of the 20 most Catholic counties in Pennsylvania, 17 of the top 20 in Wisconsin, and a whopping 18 out of 20 in Michigan. Consider that Michigan went for Trump in 2016 by fewer than 11,000 votes, and it is evident how vital it will be for the president to preserve and expand this turnout if he wishes to replicate his success in 2020.

Campaigning on the same messages that attracted these voters in the first place (and doing nothing to alienate them) are commonsense measures. But Trump lacks one key asset going into 2020: Clinton herself — and so we end where we began.

Biden’s cognitive decline may be alarming to some, and his corporate Democrat moderation infuriating to Bernie-progressives, but the man himself does not spark the sort of visceral loathing among wide swaths of the electorate as Clinton did, which candidate Trump exploited with such success.

Indeed, both Biden’s verbal slip-ups and “electability first, policies later” platform could serve to make him more relatable to working Catholic rust-belt families who have grown weary of the 24/7 maelstrom of controversy and unpleasantness occasioned by a Trump administration, and simply seek something quiet and reassuring to take its place. For all his liabilities, Biden is closer to something that these voters recognize as their “sort of guy” than Clinton ever was.

Team Trump’s job will be to prevent that relationship from coalescing by presenting a vision of healthcare, immigration, pro-life issues, and an inclusive economy that satisfies his conservative churchgoing base while showing solidarity with the low-income, the sick, and the vulnerable in accordance with Catholic Social Teaching. Not simply because it is the right thing to do, but because it will be those same voters who feel ignored and marginalized — by any administration — who can switch sides and turn an election.

Meanwhile, Team Biden should probably do its best to avoid situations like this:

WATCH: “You’re full of sh*t,” @JoeBiden tells a man who accused him of “actively trying to end our Second Amendment right.”

The fortunes of Catholic candidates and electorates alike have changed much since the days of Al Smith — as has the presumption that the faithful will pull the lever for their co-religionist in any given race. The fact that Catholics are so closely split, with vital and moveable contingents in the most important states in the nation, make it a demographic neither Republicans nor Democrats can afford to lose in 2020.

Billy Gribbin is a former special assistant to the president and speechwriter for Donald Trump.

1
Fauci Says He 'Fully' Expects Schools To Reopen In The Fall As Coronavirus Is Brought 'Under Control'
US
2
Here's How This Pro-Beijing Outlet Made It Into The White House Coronavirus Press Briefing
US
3
Senior Intel Officials Erupt Over Adam Schiff's Letter To Director Richard Grenell, Pressing Him Over ODNI Personnel Changes
Politics
4
WATCH: ABC’s Jon Karl Salutes Fauci — Fauci Fires Back With Finger Guns
Politics
5
Tucker Carlson: Even With Epidemic 'Receding,' Discussing Getting Back To Normal 'Has Become Taboo'
Media