If eyes are windows to the soul, what was left behind in the grocery stores after coronavirus panic buying are windows to what Americans won’t eat even in extreme circumstances.

People began sharing pictures on social media of what items were left behind after the shopping surge. The foods — such as cauliflower crust pizza or chocolate hummus — and the empty shelves once stocked with more appetizing foods are juxtaposed.

No one wants carrot spirals and cauliflower crust in a pandemic #traderjoes #CoronaOutbreak pic.twitter.com/RoCuLjQN5R

I guess #TraderJoes might wanna re-evaluate this product ???? pic.twitter.com/c0HgW53ToR

Carrot spirals were unpopular enough that Twitter users from different Trader Joe’s locations shared their pictures of the same stacked up boxes.

I got them! There’s a “couple more left” Lol pic.twitter.com/OVZuHJ5UHS 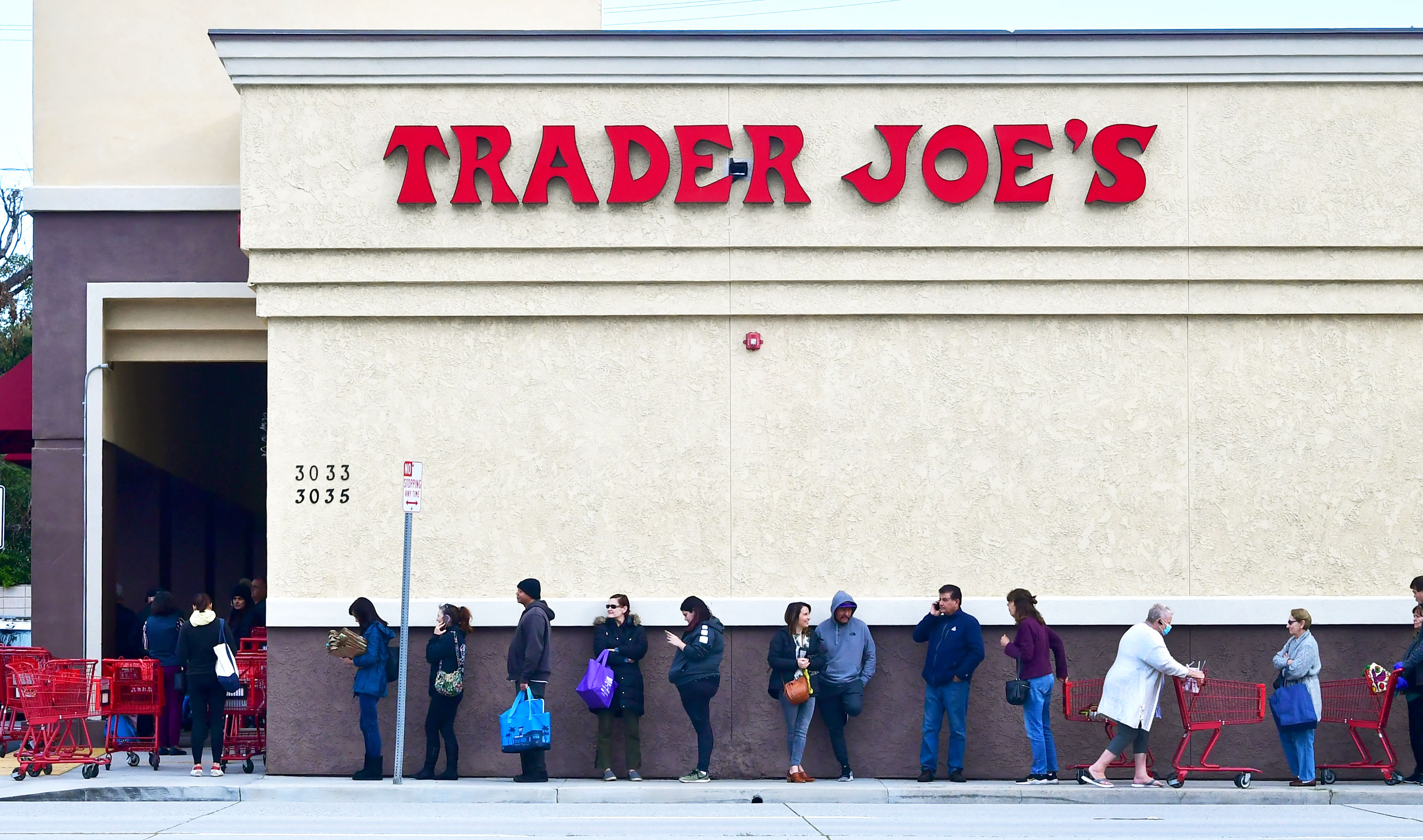 A woman wearing a facemask pushes her cart to the back of the line as people line up before the opening of a Trader Joe’s store in Pasadena, Caifornia on March 18, 2020 (Photo by FREDERIC J. BROWN/AFP via Getty Images)

Chocolate and buffalo hummus were also left behind, confirming that the flavored hummus debate hasn’t been settled.

Somehow reassuring in the midst of #coronavirus shopping frenzy to know that people still have the sense *not* to buy #chocolatehummus and buffalo hummus. #traderjoes #dc pic.twitter.com/fLvuUFWz3Y

Vegan and plant-based can be seen in proportions that appear recently stocked.

Not even in a crisis will folks buy the plant based hot dogs #californiashutdown #CaliforniaQuarantine pic.twitter.com/jEHh9lcHeT

Don’t forget the hamburgers( can we call them that ?) ???? @BeyondMeat pic.twitter.com/oi6X1z98Ik

The people have spoken and it is a resounding “Hell No!” We would rather starve in a pandemic before eating plant-based meat! pic.twitter.com/FFYvRyW4px

Two observations today from the grocery store. Plant based meats are not desired and people need to smile more! Good day! pic.twitter.com/svukEnY18j

Interesting photo sent to me from a colleague in a Michigan grocery store #COVID19 pic.twitter.com/PbRJtpwS9S 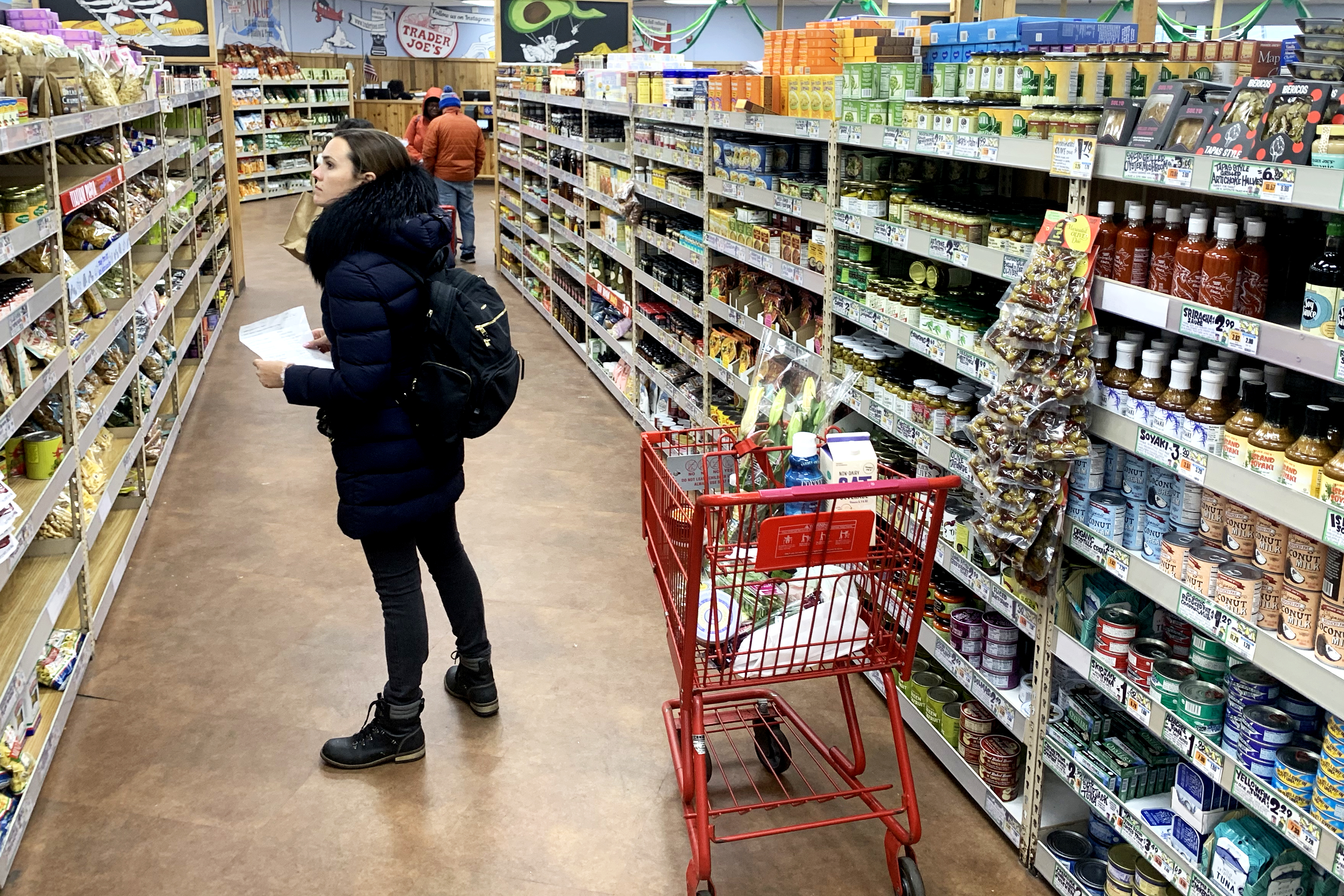 CAMBRIDGE, MASSACHUSETTS – MARCH 23: A woman shops at Trader Joe’s at on March 23, 2020 in Cambridge, Massachusetts. The store has begun limiting the capacity of shoppers allowed inside, and offering sanitizing wipes upon entry. (Photo by Maddie Meyer/Getty Images)

The newest addition to the food wars was also put in stark relief during the shopping influx. Dasani water has emerged as the black sheep of bottled water.

Damn no more Aquafina but look what water we got a lot of pic.twitter.com/tqH7rkrI8x

No one want Dasani ???? pic.twitter.com/m4bO0c2LqS

under no circumstances will people buy dasani ???? pic.twitter.com/FRCId2KMxH