The grocery delivery business Instacart is increasingly under fire as its workers worry about their safety and health amid the ongoing coronavirus pandemic.

Instacart works by having a network of personal shoppers — people who go to grocery stores and shop for orders submitted online. Once orders are picked up, the shopper delivers the groceries to your home for a fee. As coronavirus has grown, companies like Instacart have been under more pressure as more people use delivery services.

One worker who spoke with Slate said that her experience with the company has been an “absolute shit show.”

“Everything I already knew about the company—about how exploitative and abusive and predatory they are—has just grown exponentially,” she said.

The Gig Workers Collective, an activist group that fights for “gig economy” workers, published an article on Medium outlining their demands for the company, ahead of a planned walk off Monday.

“Safety precautions at no cost to workers — PPE (at minimum hand sanitizer, disinfectant wipes/sprays and soap).

Hazard pay — an extra $5 per order and defaulting the in-app tip amount to at least 10% of the order total.

An extension and expansion of pay for workers impacted by COVID-19 — anyone who has a doctor’s note for either a preexisting condition that’s a known risk factor or requiring a self-quarantine.

The deadline to qualify for these benefits must be extended beyond April 8th.”

The workers are not employees, but independent contractors, making the “strike” a somewhat strange event, as the Gig Workers Collective is not a labor union.

The issue of Instacart workers being contractors has been a contentious one too. In February, a San Diego judge ruled that the company may be violating California’s labor law by misidentifying their workers as contractors rather than employees, meaning that they are not protected under state labor laws. Instacart disagreed with the ruling and will appeal it. (RELATED: The Gig Economy Just Scored A Big Legal Victory) 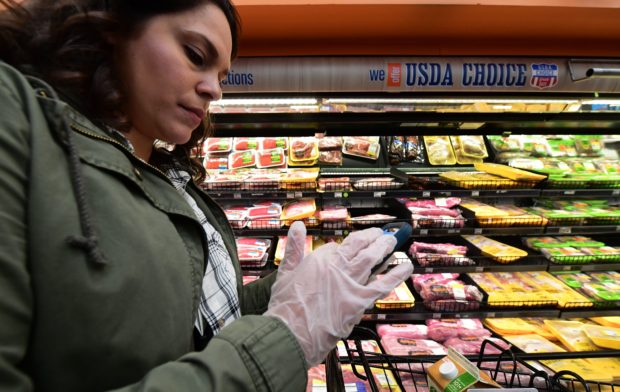 Instacart employee Monica Ortega wears gloves while using her cellphone to check orders while picking up groceries from a supermarket for delivery on March 19, 2020 in North Hollywood, California. FREDERIC J. BROWN/AFP via Getty Images

The strike on Monday made news across the political spectrum. In a lengthy statement given to The Daily Caller, the company said that the strike had no effect on their operations, and that in fact, there were more shoppers available than last week.

“We respect the rights of shoppers to provide us feedback and voice their concerns. As it relates to yesterday’s actions, we saw absolutely no impact to Instacart’s operations. Yesterday, we saw 40% more shoppers on the platform compared to the same day and time last week,” the statement reads.

“Over the last 72 hours, more groceries were sold on our platform than ever before. In the last week alone, 250,000 new people signed up to become Instacart full-service shoppers and 50,000 of them have already started shopping on the platform. The sentiment of our shopper community continues to be incredibly important to us, and today our shopper satisfaction, as measured by Net Promoter Score (NPS), is the highest it’s ever been in company history.”

The company further claimed that their workers’ earnings have actually increased recently.

“We’re always committed to ensuring shoppers are fairly compensated for their efforts. Based on the rise in customer demand, shopper earnings have increased by more than 40% month-over-month and shoppers, on average, have also seen a 30% increase in customer tips.”

Finally, the company claimed that the health concerns are already being addressed.

“Our team has an unwavering commitment to safely serve our shoppers in the wake of COVID-19, and we’ll continue to share additional updates over the coming days, weeks and months ahead as we further support this important community.” 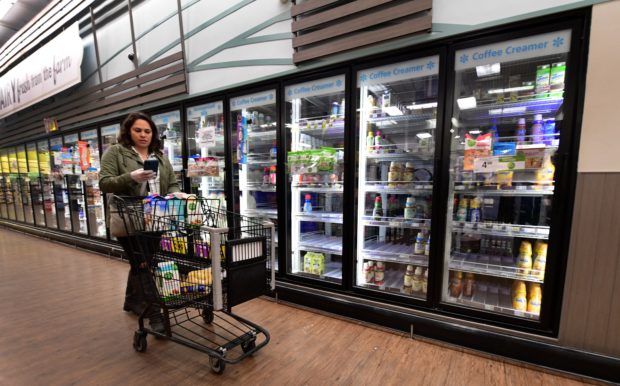 Instacart employee Monica Ortega checks her cellphone for orders while picking up groceries from a supermarket for delivery on March 19, 2020 in North Hollywood, California. FREDERIC J. BROWN/AFP via Getty Images

The Gig Workers Collective has maintained their dissatisfaction with Instacart’s response. In a post on Medium Tuesday, the activist group shared an email sent to a Massachusetts worker from the company, informing them that they may have been exposed to the virus. The group claimed vindication.

“This is the exact worst-case scenario we wrote about when giving our reasons for a strike,” the post read.

“Given the unprecedented nature of the virus and its rate of spread, some might say it would only be a matter of time before Instacart and companies like it would have to face this scenario,” the group wrote.

“But given their insistence on dragging their heels in regards to protections, sick leave, hazard pay and so on, it would not be hyperbolic to say that Instacart corporate, through its arrogance, may ultimately be responsible for exposing more people to COVID-19 than necessary.”

As more Americans rely on delivery services throughout this crisis, more gig workers, already lacking protections as employees, will be exposed to risk. (RELATED: More People Are Searching ‘Delivery’ Than ‘Bar’ For The First Time In The History Of Google Trends)

The Gig Workers Collective published another post this week including comments directly from shoppers who participated in the walk off.

One woman wrote, “I’m not risking my life, my families or anyone else’s for shitty pay. Shitty pay and no compensation if I do get sick. Nope.” (RELATED: Labor Department: Weekly Unemployment Numbers Double — Nearly 10 Million Total In Previous 2 Weeks)