When I reviewed the Springfield Armory Saint in December 2016, at its introduction, I mentioned that it was merely the start of a product line, and hinted that I could see a large-frame variant in the future. Well, the manufacturer confirmed my powers of prognostication with the release of the Saint Victor .308 in April of last year.

Given the popularity of Springfield Armory’s M1A line, it’s not surprising to see the mid-caliber option in the AR platform, and it certainly appears to have all the bells and whistles attributed to the Saint line.

So, what’s the appeal of an AR-style rifle in .308 Win.? The ammunition is more expensive, recoil is more substantial and the rifle tends to be heavier, right? There’s a number of reasons one might want to pony up the extra cash for at least one large-receiver .308 (often shorthanded to “LR-308”).

First, having a quality semi-automatic rifle chambered in .308 Win. is just a plain good idea. Second, it’s a darn good rifle should you opt to hunt—and one of life’s pleasures is going after feral hogs with a semi-automatic .308. Lastly, .308 Win. has more punch when you’re stretching your long-range legs.

Atop the rifle, most notable is the lack of a full Picatinny rail, but rather abbreviated sections fore and aft for extended riflescope options as well as backup iron sights at the muzzle end.

–
For example, a few years back I was out West on a shoot with SureFire suppressors on Dark Systems’ .223 Rem. rifles. We started off by zeroing on a 1,000-yard range with known-distance targets, which smartly had a different steel target at each 100-yard distance: an 8-inch circle at 100 yards, an IPSC silhouette at 200 yards, etc. At the 300-yard mark was a large pig silhouette, and a deer was at 400 yards.

After sighting the rifle in, I hit the 100-yard steel and 200-yard silhouette easily, but came to a screeching halt on the 300-yard pig. Bang. Nothing. No ping, no movement of the target. I held high. Nothing. I held low. Nothing. Left, right, nothing seemed to get me on target. Frustrated, I went back to 200 yards. Ping. Curious, I went to the deer-shaped target at 400 yards and hit on my first shot.

As it turns out, I was hitting the 300-yard steel just fine, but the 55-grain bullet I was launching didn’t have enough oomph to move the target. The 400-yard deer target was oddly shaped, and hits resulted in it wobbling enough to register the movement.

One of the other shooters grabbed a rifle with a more powerful scope and observed me on the 300-yard target, and sure enough, I was making hits, but without enough power to budge the heavy target. With .308 Win., that’s not a problem. If you’re interested in long(er)-range shooting, it’s the way to go.

–
Springfield Armory makes sure the Saint Victor line is feature-rich: Freefloat barrel, M-Lok-compatible handguards, flip-up sights, Bravo Company furniture and an upgraded trigger are just some of the next-level equipment.

The .308 Win. model offers a nickel-boron trigger, proprietary muzzle brake and a lightweight-profile barrel with Melonite finish in addition to these upgrades, resulting in a rifle that handles and looks great while offering useful touches like plentiful QD mounts for a sling.

On the range, the Victor .308 both shoots and handles well. The “H” heavy tungsten buffer, mid-length gas system and Melonite-coated BCG ensure reliable cycling, while the lighter weight and Bravo Company furniture promote good handling. Whether shooting for accuracy at 100 yards or switching between targets at 25 yards, the Saint .308 was controllable and made solid hits.

As I’ve stated before, when talking about a firearm’s performance on the range, “boring” is good. All fodder, from 150-grain FMJ practice ammo through 175-grain Match-grade, functioned as intended, with an obvious accuracy bias to the heavier, match-grade ammo.

Bravo Company furniture offers adjustability and good handling characteristics • Nickel- boron-coated and flat-faced, the trigger was on the heavy side of average, but perfectly acceptable for a working carbine. Pride of ownership is apparent throughout the Saint Victor series, with the crossed-cannon logo prominent on the lower receiver.

–
When it comes to magazines, LR-308 rifles have fewer choices than their smaller cousins, that’s no secret. In addition, there are a few types proprietary to earlier versions of the .308 Win. AR platform, so look for magazines compatible with the SR-25 pattern. Since I’m currently working on an LR-308 build, I happened to have a pile of magazines that fit, so I tested polymer offerings from Hexmag and Magpul, steel ones from Brownells and the hybrid L7 from Lancer.

All variants fed the Saint Victor .308 just fine, but the metal Brownells magazines and the polymer Hexmag models required some assistance coming out of the magazine well.

So, when it comes to a large-receiver, AR-pattern rifle, there’s a lot of options out there, as with much in the AR world. Springfield Armory’s Saint Victor .308 is feature-rich, but without a premium price tag—the $1,400 MSRP translates into a sub-$1,200 “real world” price, which is pretty competitive among comparably equipped rifles. Given the upgraded features on the Saint, though, it’s really quite a bargain. 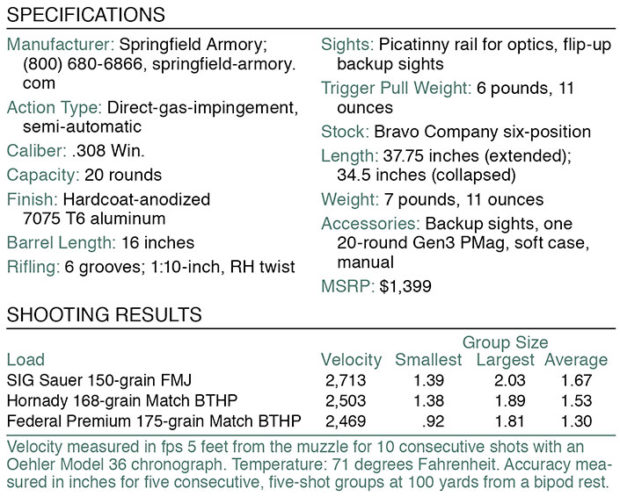