Obviously, the internet can be both at the same time. After all, cyberspace contains multitudes, even infinities. And we’re seeing a diversity of thought — not all good, but more good than bad — playing out in the midst of this coronavirus crisis. And it’s playing out with Moore’s Law-like rapidity.

In fact, in less than a month, we’ve seen a remarkable victory for public health, as practical activists have gone online, overcoming congealed bureaucratic orthodoxy.

This victory has been ably described by one Joseph Perla, a San Francisco techie, in an April 5 post, “How to change global policy.”

Perla begins by writing, “I’ll tell the story of how a large grassroots group behind #Masks4All helped change global policy and saved thousands of lives in America.” It all started on March 14, when a Slovakian writer, Petr Ludwig, uploaded a video on YouTube arguing that face masks were vital to combating the coronavirus plague. (RELATED:EXCLUSIVE: Coronavirus Expert Says Virus Could Have Leaked From Wuhan Lab)

As Ludwig noted, face masks were not uncommon in East Asia, even before coronavirus, and so, in the wake of new health warnings, many millions willingly put them on. Yet in the West, masks were both unfamiliar and officially discouraged, even as the virus began its ravaging.

Since the data seemed clear as to the value of wearing face masks, Ludwig and his associates resolved to do more than make a video to change attitudes; they stormed the internet to save lives. They knew that many factors were at play in the face-mask issue. The Asian willingness to don masks is in keeping with a Confucian culture that emphasizes healthy habits, whereas Western reluctance to don masks is in keeping with our more libertarian culture of “do your own thing.”

Yet on the other hand, few, anywhere, want to die. Perla continues:

“Very quickly, this close-knit group of scrappy Eastern Europeans got to 100% compliance in just 10 days, and wrote a great history of it. Petr convinced Czechia and Slovakia (formerly the same country) to wear masks all through grassroots efforts, which then convinced politicians to wear and require masks in public. These became the first non-Asian countries to require masks, setting the example.” 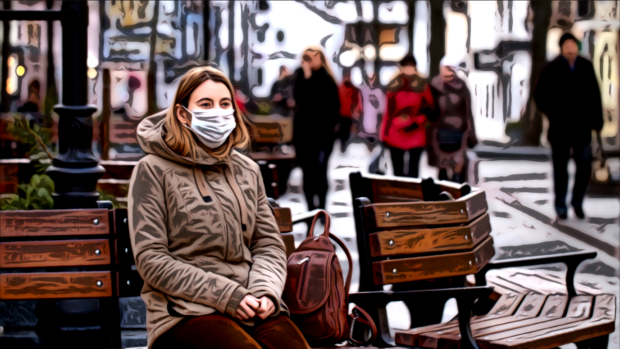 Courtesy of the DCNF

From Central Europe, the mask movement spread around the world, and the evidence shows that masks are helping.

Yet along the way, there was plenty of high-placed opposition to #Masks4All. For instance, on Feb. 29, U.S. Surgeon General Jerome Adams tweeted, “Seriously people- STOP BUYING MASKS!” Indeed, as late as March 28, Adams continued his opposition, tweeting:

“Regarding masks:@WHO @CDCgov & my office have consistently recommended against the general public wearing masks as there is scant or conflicting evidence they benefit individual wearers in a meaningful way.”

We can pause to observe that to some extent, the pro- and anti-mask sides were talking past each other. That is, the pro-maskers were saying “wear a mask,” while the anti-maskers were often saying “don’t buy a mask.” Left out of that back-and-forth, of course, was the middle-ground option of making your own mask, which many millions have done, making them out of tissue paper, paper towels, cloth, plastic bottles, and just about anything else.

In fact, it is arguable that Adams, as well as others in the Trump administration, were focused on dissuading people from buying masks that would otherwise have gone to health care workers, who were most at risk. As Adams also wrote in his tweet of Feb. 29, “if healthcare providers can’t get [masks] to care for sick patients, it puts them and our communities at risk!”

We can allow that Adams had a reasonable point to make about the need to assure mask access for front-line health care workers. And we can further observe that the question as to why there was a shortage of masks would have to be answered by someone above Adams’s pay-grade == and yet we can conclude, nonetheless, that concern about mask access seems to have morphed into a general hostility to the idea of wearing a mask. That is, the goal of discouraging ordinary people from possibly cornering the market on masks seems to have been fused to some preexisting skepticism, within the government, about the actual benefits of masks.

Sadly, tragically, the middle ground — make your own mask — seems to have been overlooked. Such lack of nuance is, of course, a hallmark of both bureaucracy and orthodoxy. And so perhaps Adams, double-dosing on preserve-the-status-quo thinking, lost sight of the obvious expedient of do-it-yourself.

Admittedly, this is a somewhat sunny interpretation of events; a darker take comes from Fox News host Tucker Carlson, who addressed the government bluntly on March 31:

“Look, we understand there’s a shortage of masks. We understand only certain people should get them because it’s a triage moment. We get it. But stop lying to us.”

Yet whether the explanation is light, dark, or in-between, we’ll never know how many lives would have been saved had people been urged to wear masks from the beginning.

Still, this coronavirus saga has something of a happy ending — and so it will make for a great case study on digital campaigning, as well as on public health improving. That is, the grassroots pressure from the internet (using the word “viral” doesn’t seem appropriate anymore) had caused officialdom to change its course.

By April 1, Adams was making the distinction between gold-standard masks, such as the N-95, which he still thought should be reserved for nurses and doctors — and whatever face-covering people could come up with on their own.

Then on April 3, Adams did a complete U-turn, endorsing masks. Indeed, the following day, he tweeted an instructional video on how to make a mask.

Once again, this recent official endorsement of masks doesn’t wipe away the previous actions — although for a full accounting, maybe we’ll have to wait for the inevitable official inquiry. In the meantime, we might note that an April 7 poll found that 73% of Americans support wearing masks.

We have been reminded that not all relevant expertise is located within the public health system. For all the good that they accomplished, Perla and Ludwig held no official post; they went out and made their own bully digital pulpit — and people listened.

So we know that the internet can, indeed, speak truth to power, loudly and quickly. Indeed, if we measure the time span from Ludwig’s wear-a-mask video to Adams’s make-your-own-mask tweet, we see that it took a mere three weeks for the better idea to change the world.

If, as they say, time is the deliverer of truth, well, that was one heckuva fast delivery.

Indeed, at the risk of sounding sappy, the story of #Masks4All is the internet living up to its promise, in this case as a wellspring of better health.

Yes, of course, much of the internet is still a cesspool, obnoxious and toxic. And yet the fast spread of #Masks4All is a reminder that the ‘net, when powered by sharp minds and good hearts, can, in fact, be miraculous.