A vast majority of Americans favors dramatic restrictions on immigration amid the coronavirus pandemic, a USA Today/Ipsos national survey found.

American attitudes about coronavirus and its impact on our way of life has changed dramatically over the course of one month, the poll discovered. The survey had asked voters questions about their feelings on coronavirus in March, when it first began spreading through the United States, and then posed the same questions roughly one month later.

With more than 95% of the country under lockdown orders, millions filing for unemployment benefits, and more than 22,000 deaths from the virus, the U.S. population is, by leaps and bounds, more willing to implement strong measures to combat the pandemic.

Roughly eight in 10 Americans not only favor a mandatory quarantine for anyone arriving from another country, but also favor a moratorium on immigration from other countries altogether, the survey found. Additionally, seven in 10 Americans want to ground all international flights, and nearly half of respondents favored grounding all domestic flights. 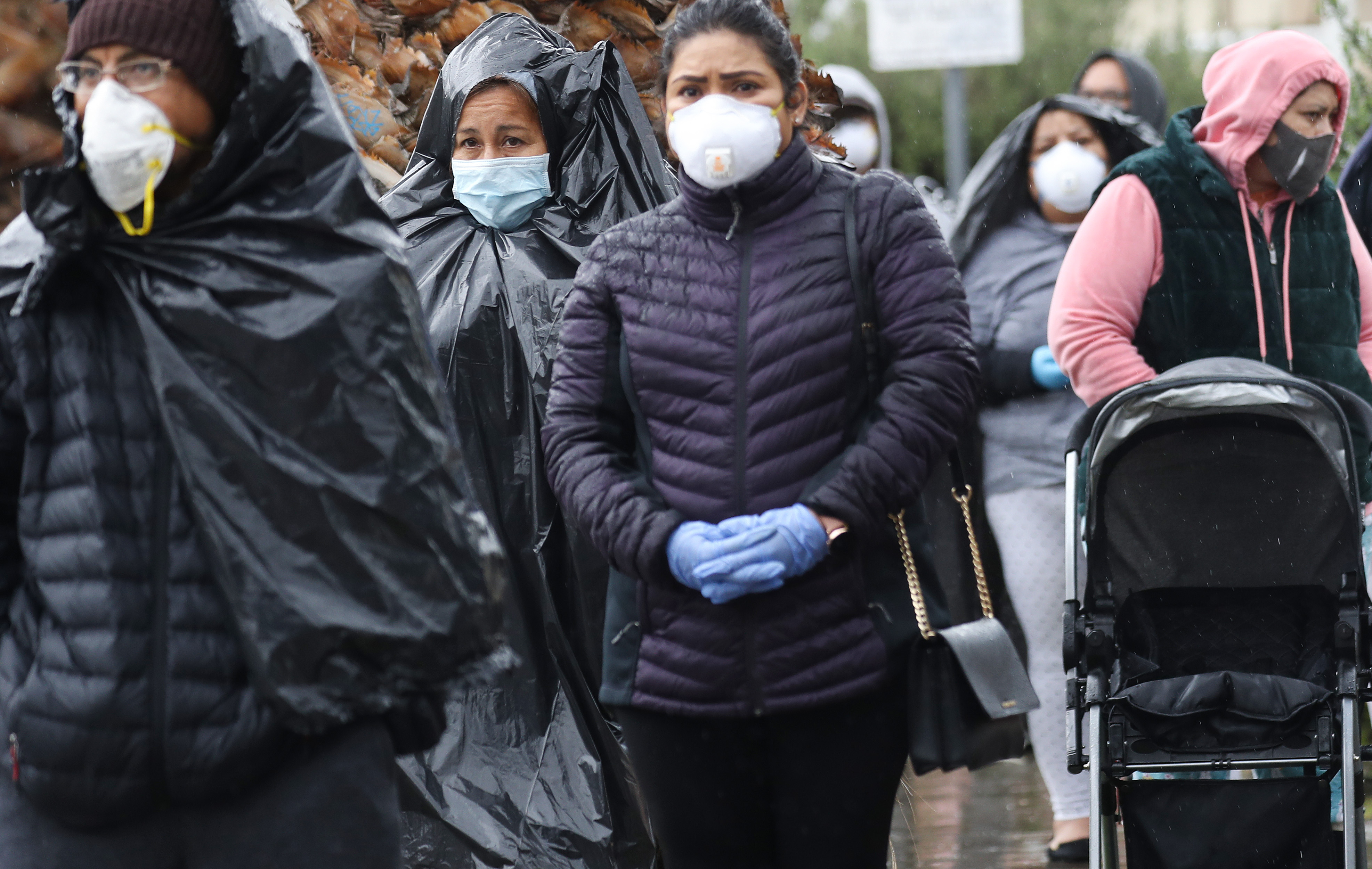 Juana Gomez (2nd L), from North Hollywood, wears a face mask, while using a trash bag to protect against the rain, as she waits in line to receive food at a Food Bank distribution for those in need as the coronavirus pandemic continues on April 9, 2020 in Van Nuys, California. (Photo by Mario Tama/Getty Images)

“America is a different place than it was a month ago,” Cliff Young, president of Ipsos, said in a statement on Monday.

He continued: “In that time, we’ve seen Americans take a collective pause from public gatherings, a decline in consumer confidence and rising anxiety levels. The changes we’ve seen in this poll highlight our COVID-19 world.”

USA Today and Ipsos launched a nationwide survey about COVID-19 between March 10 and 11, when the virus first began to spread across the country. Roughly one month later — on Thursday and Friday — the same survey was launched to gauge how attitudes have changed as the crisis has only worsened in the United States. (RELATED: Trump Says Decision To Reopen Economy ‘Will Be Made Shortly’)

In the first poll, only 34% of Americans said coronavirus posed a “high threat” to the United States. The same poll taken this month found that number has increased to 71%.

Similar changes were seen in Americans’ views about the virus’s threat to the global economy. The percentage of respondents who said it posed a “high threat” to the world economy rose from 47% to 76%.

However, there was one issue that still appeared to divide respondents, with a clear divide along partisan lines. When asked if the government should provide financial assistance to illegal aliens who are unable to work because of the virus, 68% of Republicans opposed the idea while 58% of Democrats expressed support for it.

Both online surveys reached out to 1,005 adults across the United States. The credibility interval — which USA Today likened to a margin of error — has a plus or minus of 3.5 percentage points.