Nurse Ally Marcello works at the epicenter of New York’s coronavirus outbreak. At 1 a.m. on Wednesday, she held up a FaceTime call to help a family say their final goodbye to their father.

Marcello, 24, has worked nights as a critical care nurse at Long Island Jewish Medical Center in New Hyde Park for almost two years, she told the Daily Caller News Foundation. Her hospital began to notice the impacts of the coronavirus pandemic in the middle of March, and emergency room doctors told staff to brace for impact, she said.

“Things got bad pretty quickly,” said Marcello, who is also the founder of ISeeU Blankets, a project that provides home-made blankets to patients and family members in her ICU (intensive care unit). “The surge in the hospital went way up and we started having to float to different units, and you started hearing medical rapid responses being called overhead, which is when they sent the rapid response team to people who are on the regular floors who aren’t doing well and might need critical care.”

As of Monday, Long Island Jewish Medical Center had 790 patients: 592 of these patients had tested positive for coronavirus, and 115 of them were on ventilators, Marcello said. Only about 15% of those on ventilators will make it off, she added.

Marcello would typically work three days a week with an occasional fourth shift and focus on two very sick patients who need hourly checks and special medication every couple of minutes. But due to the pandemic, Marcello has been working five days a week and caring for four ventilated patients at a time.

Marcello and her fellow nurses are no strangers to sickness and death, but they aren’t used to the sheer amount of sick people that they must tend to every day. She expressed sadness that the pandemic limits the TLC (tender loving care) that nurses wish to show their patients. This wears on their emotions, she said. 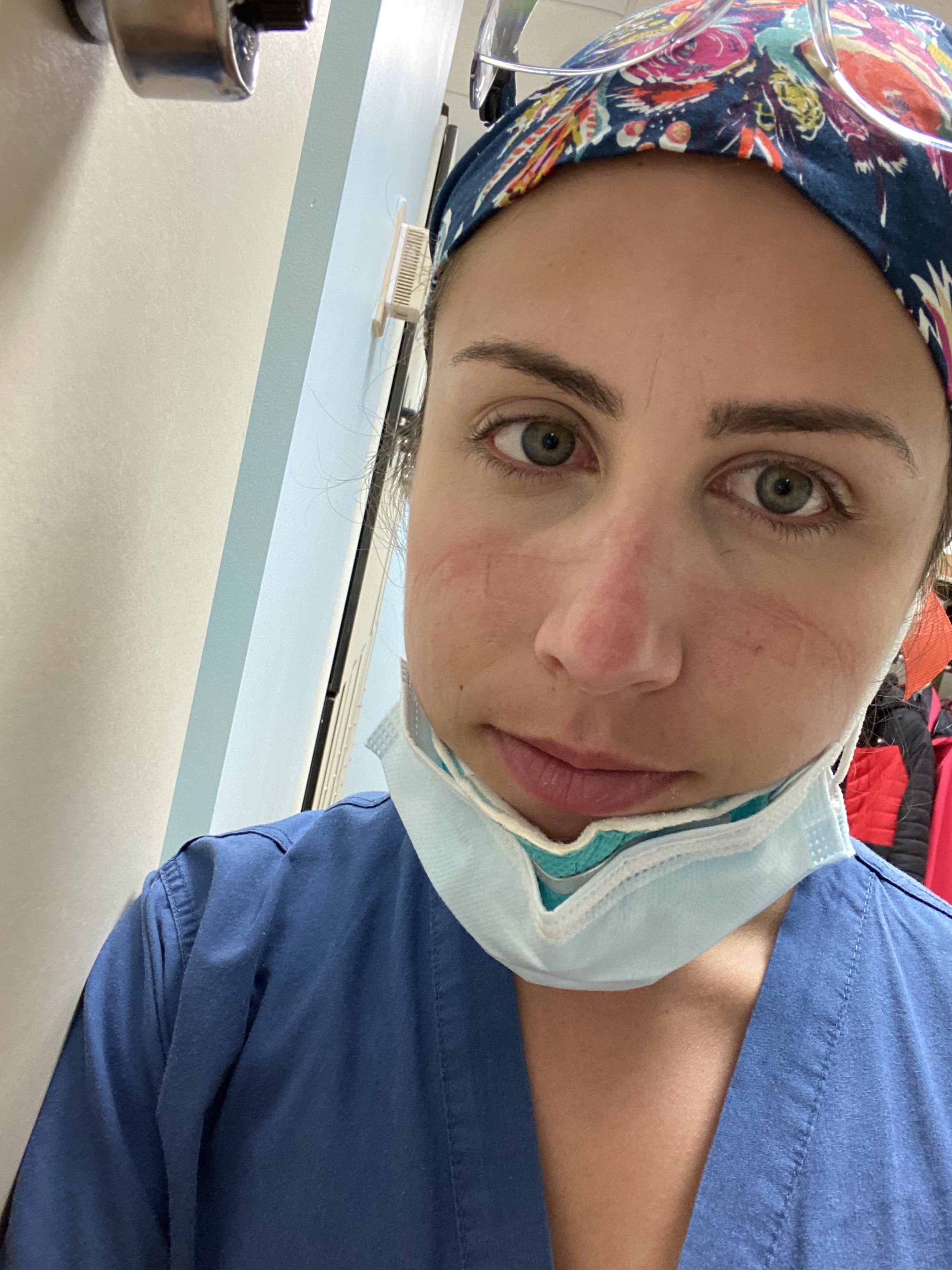 Marcello shows the lines from her mask after a long day caring for coronavirus patients. Photo courtesy of Ally Marcello.

Earlier this week, Marcello cared for a patient who had recently been transferred to Long Island Jewish Medical Center — a patient she identified as A.S. to protect his privacy. The hospital has received many more patients since Democratic New York Gov. Andrew Cuomo deemed the hospital a “coronavirus hotspot, meaning the hospital would receive more funding and more resources than other hospitals,” she said.

Marcello cannot recall exactly how long the patient was in the ICU, but she believes he was there for a couple of days. One of her fellow nurses had been caring for him, but the nurse could not be on duty that night and Marcello offered to care for him.

“It’s hard to manage these patients, first of all, because we don’t exactly know what we’re dealing with,” she said. “We were fighting against the clock and trying to do what we could for him and it just, it wasn’t really working for him. And his blood pressure medication requirements started quickly increasing.”

As Long Island Jewish Medical Center focuses on the pandemic and scales back surgeries and pediatric cases, responsibilities at the hospital have shifted. Scrub nurses who usually only work in the operating room have been helping out as “FaceTime facilitators,” she said, allowing the nurses to give care to all the patients who need it without prohibiting the patients from talking to their families.

As the night progressed, A.S. became worse. Around 1 a.m., Marcello said she had maxed out on all the blood pressure medications to try to keep him alive long enough to FaceTime his family so they could say goodbye.

“We did a multiple-person FaceTime call, so that way, all of his kids could be on at the same time,” she said. The family expressed their love for him and spoke to him in Spanish. She could understand some of it.

She continued: “And you know, they were just expressing their love for him and speaking to him in Spanish since that’s mostly what he spoke.”

“‘We love you and we forgive you for anything,'” she described the family members saying to their father. “‘You can go in peace.'”

Their father’s heart stopped as they were still speaking to him, she said.

Marcello struggled for words, fearing she would offend the grieving family. She wanted to show them respect and sympathy. Usually it would be the doctor who would call and tell the family that their loved one had passed, she said, and this usually happened after the patient had passed. In this rare coronavirus situation, she said, the family was actually present virtually when their loved one passed.

She stayed by A.S.’s bedside and held the phone up for another 30 minutes so the family could see their father’s face.

“Probably the hardest part was finding the best time to kind of hang up so that way I could start the postmortem care,” she said. “When they’re all crying and saying how much they love him, how do you choose when to say, ‘Okay, I’m so sorry but we have to go now?’ It kind of felt like I was ending his life in a way, even though he had already passed.”

After she hung up the phone, she broke down and cried.

I write this post with a heavy heart but also with immense pride. Today I had to do the hardest thing I’ve ever done in my whole life. At 1am I had to FaceTime a family so that they could say their final goodbyes to their dad. I held the phone there as they wept when his heart stopped, when it took its final beat. I had to tell them their dad was dead and how sorry I was but how i gave him love and made him comfortable. They sobbed over FaceTime as I stroked his hair and held his hand for them since they couldn’t be there to do it themselves. I held the phone fighting back tears I wanted to cry for this family. Then, I had to tell them we had to go and I had to clean their dad before sending him to the morgue. Hanging up on this family was the hardest thing I’ve ever done. It was as if I had pulled the plug on the patient myself. With one click of a button I essentially ended the last contact this family would ever have with their loved one. That broke me. As soon as I hung up tears flooded my eyes and I couldn’t hold back, it was if a damn had cracked and all the water in my body was let out. I pray that I was able to give this family some closure. . . . This post was not to make you feel sorry for me, but it was to express my pride. I love my job how I get to fill in for them as family when there’s can’t be present. I love that I am able to make the patient and his/her family comfortable in their last moments. I love to give my all to my patients but I pray this virus ends soon. . . . I feel incredible love and pride the the nurses who work alongside me. We have very special project in my unit, the Surgical (now COVID) ICU. They have teamed up with my ISeeU Blanket project and with the $7K we raised we will be sending gift bags to each family that has a deceased family member. This photo shows things that will be included: a handmade ISeeU Blanket, their ECG strip that will be framed and a fingerprint framed as well. This is just one of the many reason why I am so proud to work with the people I do. They always go the extra mile for their patients. Florence nightingale was right when she said this would be the #yearofthenurse #iseeublankets #covid

“This post was not to make you feel sorry for me, but it was to express my pride,” Marcello wrote in an Instagram post the morning after her patient’s death. “I love my job how I get to fill in for them as family when there’s can’t be present. I love that I am able to make the patient and his/her family comfortable in their last moments. I love to give my all to my patients but I pray this virus ends soon.”

Marcello is thankful she has had time to process the situation by talking to her coworkers, friends, family and her boyfriend Tim.

“It was tough, but you know, you kind of have to bring yourself together,” she said. “I had a really big cry for 15 minutes and the other nurses picked up my other assignment, my other patient I was taking care of. So that way I can kind of let it out, collect myself. And then sadly, you kind of just have to go back to work. You could still be sad about it, but you gotta think about the other patient that’s also in your care.”

As Marcello rests up before she heads back to fight the pandemic, she wants people to understand that even though the situation appears to be getting better, things are still bad in the hospital, especially for the ICU. She encourages everyone to listen to the government on when Americans can resume normal activities.

“People are still getting worse and you know, there’s always the risk for a second wave to hit us when people start going out again,” she said. “You know, people can be carriers and not have symptoms and not know it, and they could spread it when they start going out ’cause the weather’s getting better.” 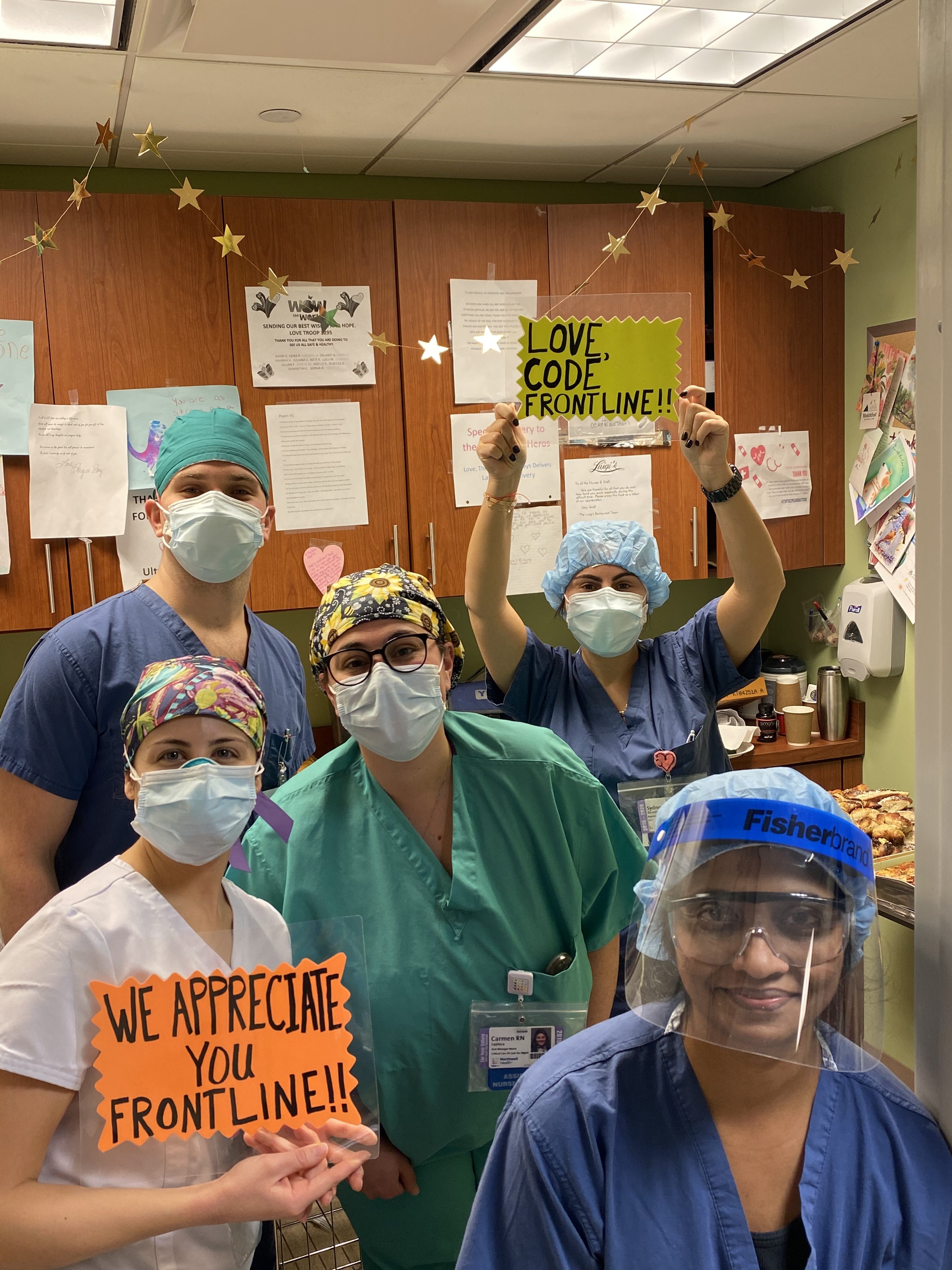 Marcello and her co-workers hold signs from people thanking them for their hard work. Photo courtesy of Ally Marcello

Marcello is motivated to keep caring for the sick throughout the pandemic, even at the risk of her own safety, by both her patients and by her coworkers. (RELATED: Nashville Nurses Pray Over Patients On Hospital Roof During Their Break: ‘Go To The Helipad And Pray’)

“I work with amazing, amazing people and you know, every time I go in we still somehow find a way to have a good time and keep each other happy and positive,” she said.

Marcello and her coworkers in the Long Island Jewish Medical Center SICU started a GoFundMe on March 25, “Help LIJ’s SICU Fight The Pandemic of COVID-19,” which has surpassed its goal of $2,000 by over $3,000.

“Everyone’s been really supportive,” she said, describing how almost every shift she works, people donate snacks and food and send pictures and letters.

The nurses have a wall in the cafeteria that is covered in letters from students, she said, and her friends send her care packages in the mail. Someone played bagpipes outside Long Island Jewish Medical Center the other day, she added, and firefighters lined the walkway and clapped for the health care workers.

“We do it for the patients and their families because we put ourselves in their shoes,” she said. “We want the best care for our family members or for ourselves if we got sick. It’s just little things, little acts of kindness and appreciation from the community. It’s all those little things that kind of add up together and keep you going even when things seem very frustrating.” 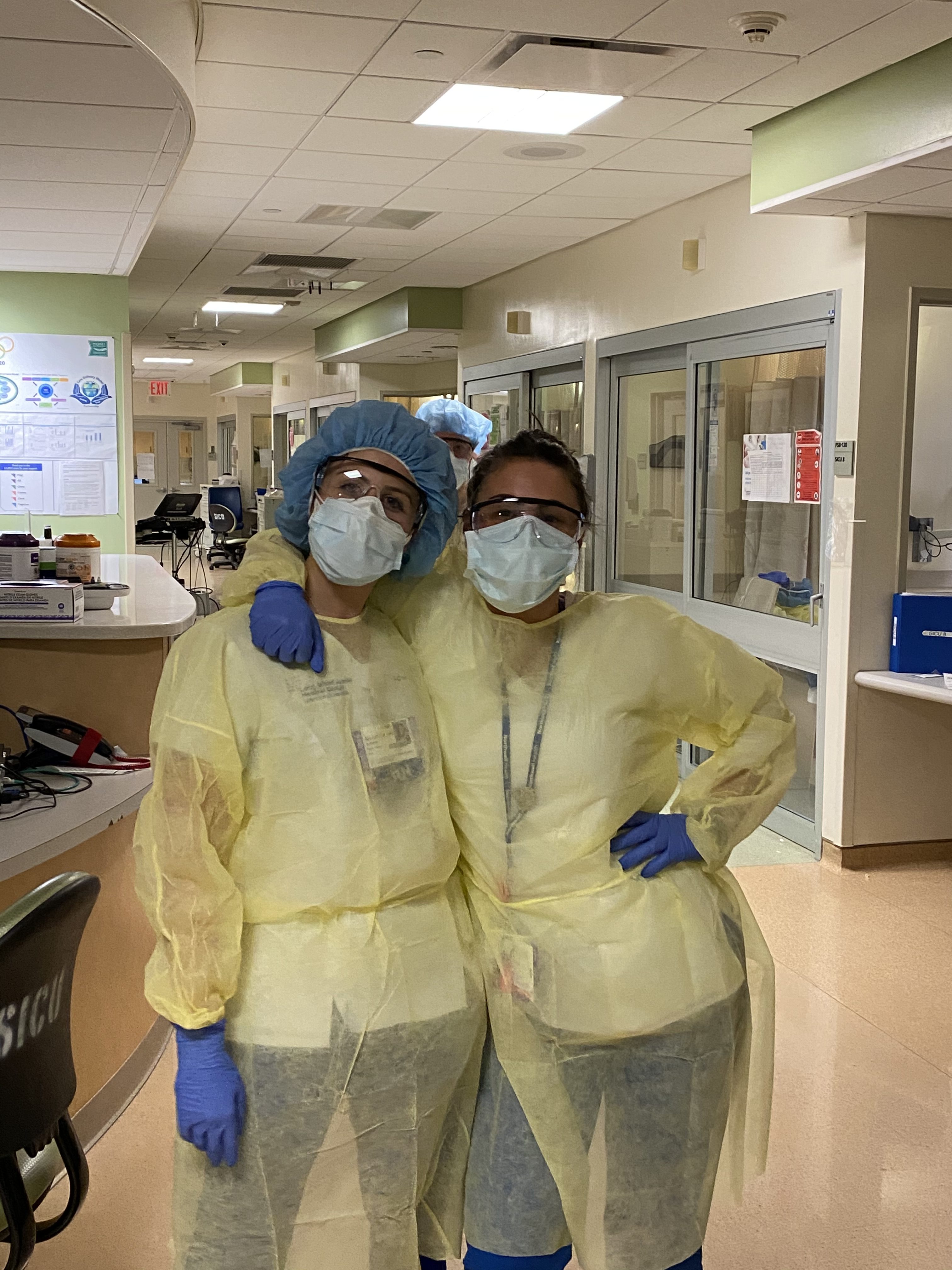