Democratic New York Rep. Alexandria Ocasio-Cortez tweeted — and then quickly deleted — comments that appeared to show adulation over the price of oil dipping below $0 a barrel, which will ultimately lead to job losses.

Ocasio-Cortez on Monday reacted gleefully at news that the price of oil had dropped below $0, saying that such a milestone would mean the United States was ripe for a mass transition to green energy. The comments appeared to suggest that Ocasio-Cortez was unaware of the job losses that would accompany the drop in price, or simply didn’t care.

The tweet also suggested that she didn’t understand consumers would be less likely to transition to expensive renewable energy sources while oil is cheaper than it’s ever been.

“You absolutely love to see it,” the first-term lawmaker tweeted Monday, responding to news that oil prices had reached negative values. 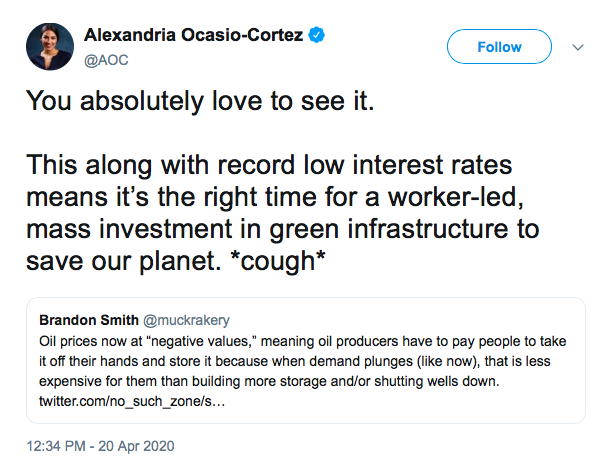 “This along with record low interest rates means it’s the right time for a worker-led, mass investment in green infrastructure to save our planet. *cough*,” she continued.

The progressive lawmaker deleted the tweet, but not before it caught the attention of social media and was archived permanently on the internet.

Ocasio-Cortez, outside of ousting a powerful House Democrat in the 2018 primary elections, is largely known for her Green New Deal proposal, which seeks to dramatically transition the country’s energy sector away from fossil fuels and toward renewable forms of energy, such as wind and solar.

Amid the global coronavirus pandemic, oil prices plunged into the negatives on Monday, which suggests that those who have oil to sell were willing to pay others in order to get rid of it as barrels continue to be stockpiled in any available space companies can locate. (RELATED: House Democrats Are Lining Up Behind What Could Be The Largest Expansion Of Government In Decades)

Thousands of workers in the Houston area alone could lose their jobs amid the plunge in oil prices — with more job losses across the country to be expected.

After deleting her initial comments, she said the predicament was a “turning point” for the climate agenda.

“This snapshot is being acknowledged as a turning point in the climate movement. Fossil fuels are in long-term structural decline. This along w/ low interest rates means it‘s the right time to create millions of jobs transitioning to renewable and clean energy. A key opportunity,” she tweeted.