New York Times publisher A.G. Sulzberger appeared to dodge a question about its “1619 Project” when asked if the paper plans to “correct the record with the vigor with which it distorted it.”

Christopher Arps, a “Project 21” member, asked during an annual virtual shareholder meeting about the NYT’s decision to issue a clarification regarding the project in March after major debate online. (RELATED: NYT ‘1619 Project’ Makes Clarification To Essay Amid Controversy)

“Project 21” is a black leadership network – part of the Free Enterprise Project – with the National Center for Public Policy, according to a press release. The group sends people to shareholder meetings to voice concerns about the company’s work and ideologies.

“The New York Times has invested significant resources in its 1619 Project, built upon the premise that everything in American history is irrevocably built on and tainted by slavery,” Arps’ question read. “Many well-respected historians from a wide array of backgrounds have stepped forward to challenge the premises and factual assertions of the Project, particularly the claim that U.S. independence was motivated by a desire to break from an abolitionist Britain.”

“The Times has finally admitted its error. Will it now go back to correct the record with the vigor with which it distorted it, and ensure that schools using 1619 Project materials are not teaching falsehoods?”

Sulzberger appeared to dodge the question, as he failed to answer whether the NYT will correct the record and make sure schools “are not teaching falsehoods.” Schools around the country have begun to implement the NYT “1619 Project,” which aims to to “reframe the country’s history” by suggesting America’s “true founding” was when the first slaves arrived in 1619.

“The 1619 Project’s been widely read and praised, including by many of the nation’s preeminent historians,” Sulzberger replied according to the press release. “It also certainly has its critics, some of whom disagree with some of its conclusions. And one of the things that we’ve tried hard to do throughout the Project is simply to encourage dialogue between those with different perspectives. And we think that that debate has been of real value to the public.”

Nikole Hannah-Jones, the lead writer for the NYT “1619 Project,” disputed Arps’ question, telling the Daily Caller that no correction was issued and no error was made.

“The New York Times did not issue a correction to the claim about the Revolution, nor make an error here, but did make a clarification that does not change the assertion that some colonists were indeed motivated by the desire to maintain slavery in the British North American colonies,” Hannah-Jones said. “We attached an entire note to this clarification and shared it widely and it was covered by numerous news sites.” 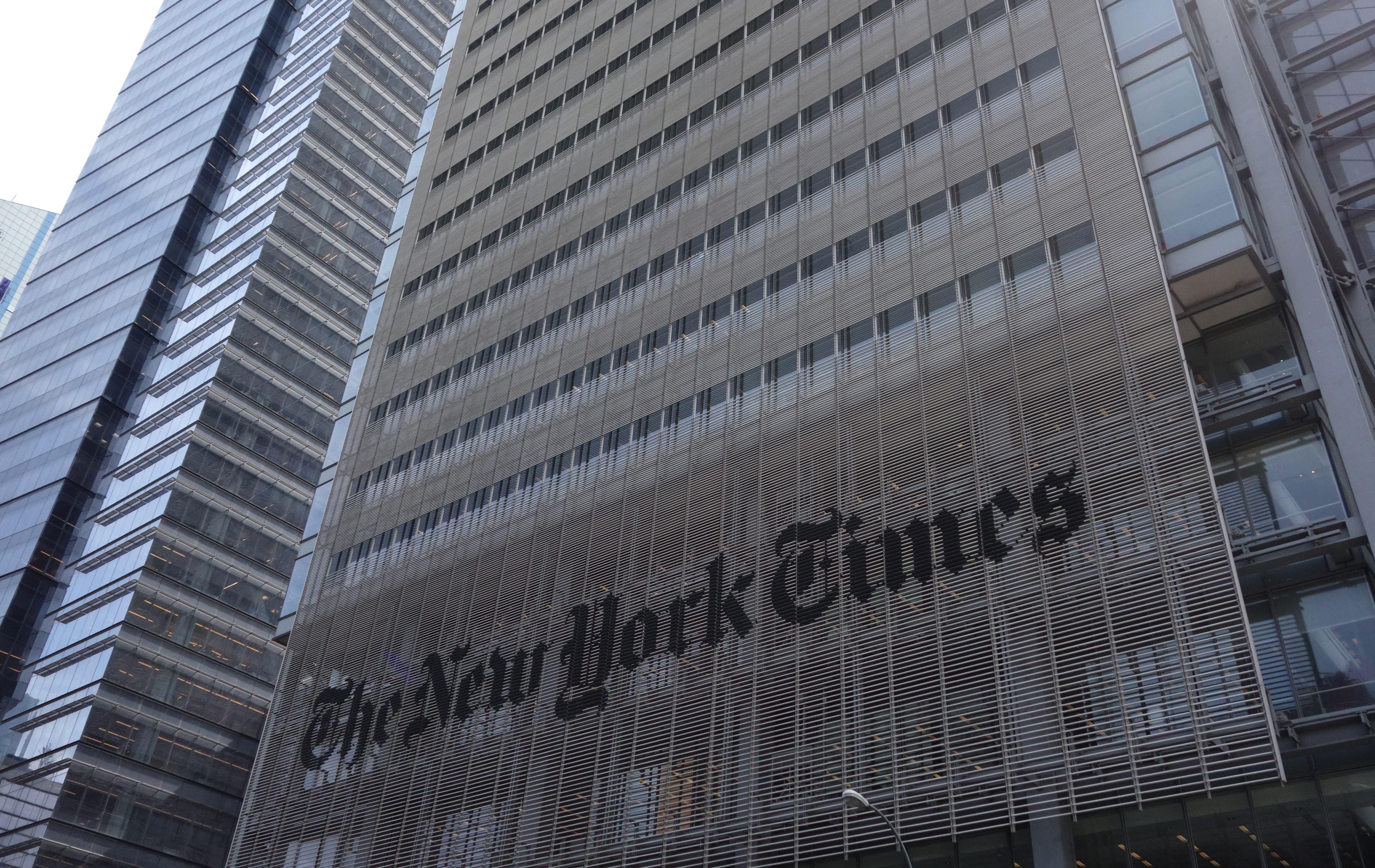 The sign on the west side of the New York Times building at 620 Eighth Ave. April 28, 2016 in New York. (DON EMMERT/AFP via Getty Images)

She added that only “a small number of historians” have a problem with the project and said that “a far greater number support” it.

“While it is true that a small number of historians have taken issue with the project, it’s curious that critics never mention the fact that a far greater number support the project nor reference the many pieces written by preeminent historians both defending the 1619 Projects and the facts and framing that this small group dispute,” Hannah-Jones added.

“I am flattered that eight months after its publication, the 1619 Project seems to still be top of so many minds.”

Arps was “disturbed” by Sulzberger’s response, calling the 1619 Project “a travesty,” according to the press release. He added that “objective newspapers do not ‘start dialogues’ by spreading falsehoods, nor do they fail to correct their errors when forced to acknowledge them.”

“The 1619 Project is a travesty,” Arps said after the meeting according to the press release. “Slavery is a part of American history, and a sad one. But it is not all of American history. All Americans of all races and backgrounds have so much to be proud of in our shared history.”

“That the New York Times, a once great newspaper, should lead this charge is horrifying. That the errors are aimed at schoolchildren is reprehensible. And the response today – one that completely failed even to acknowledge the corrections that the Times has been forced to make, and that failed to commit to correcting its errors for school, is beyond the pale.”

“This is basically how the Times answered: The 1619 Project created controversy but we found some historians who agreed with us and so as long as it spurred discussion we’re good with that,” according to Arps. “But the Times itself has admitted that it made important errors in the Project. So basically the Times said it’s ok to put out misinformation as long as it spurs a discussion? That’s absurd.”

“The 1619 Project makes clear, once and for all, that the Times in 2020 is not a newspaper of record. It’s a vicious caricature of its once respectable self.”