Former Vice President Joe Biden announced on Armenian Genocide Remembrance Day that he would recognize the genocide if elected president.

“If elected, I pledge to support a resolution recognizing the Armenian Genocide and will make universal human rights a top priority for my administration,” he said in a Medium post Friday.

Biden adds that during his years in the Senate, he led efforts to recognize the genocide against the Armenian people, which took place in 1915 and was perpetrated by the Ottoman Turks. The genocide has been a sensitive subject due to Turkey’s — a North Atlantic Treaty Organization (NATO) ally — repeated denial that what took place was a “genocide.” (RELATED: ‘This Is Awful’: Ilhan Omar Blasted Over Her Vote On Armenian Genocide Resolution)

“The Armenian diaspora is trying to instill hatred against Turkey through a worldwide campaign on genocide claims ahead of the centennial anniversary of 1915,” Turkish President Recep Tayyip Erdogan said in 2015 according to the New York Times.

Although Biden vows to recognize the genocide if elected president, the Obama-Biden Administration refused to do so every year throughout the two-term presidency. Biden had supported a resolution as senator in 2007 to acknowledge the Armenian Genocide, which President George W. Bush urged lawmakers to reject, according to the New York Times.

Armenian-American diaspora have advocated for the use of the word “genocide” to properly recognize the over 1.5 million Armenians, Assyrians, Chaldeans, Greeks, and other Christian minorities who were systematically massacred in what a near consensus of historians and academics have declared to be a “genocide.”

President Obama had promised to recognize the genocide in 2008, noting that “two years ago, I criticized the secretary of state for the firing of U.S. Ambassador to Armenia, John Evans, after he properly used the term ‘genocide’ to describe Turkey’s slaughter of thousands of Armenians starting in 1915. … As president I will recognize the Armenian Genocide,” according to PolitiFact.

However, the Obama White House stopped short of genocide recognition, instead opting for the words “mass atrocity” and “tragedy.”

“Today we stand with the Armenian people throughout the world in recalling the horror of the Meds Yeghern and reaffirm our ongoing commitment to a democratic, peaceful, and prosperous Armenia,” the White House statement from 2016 said. 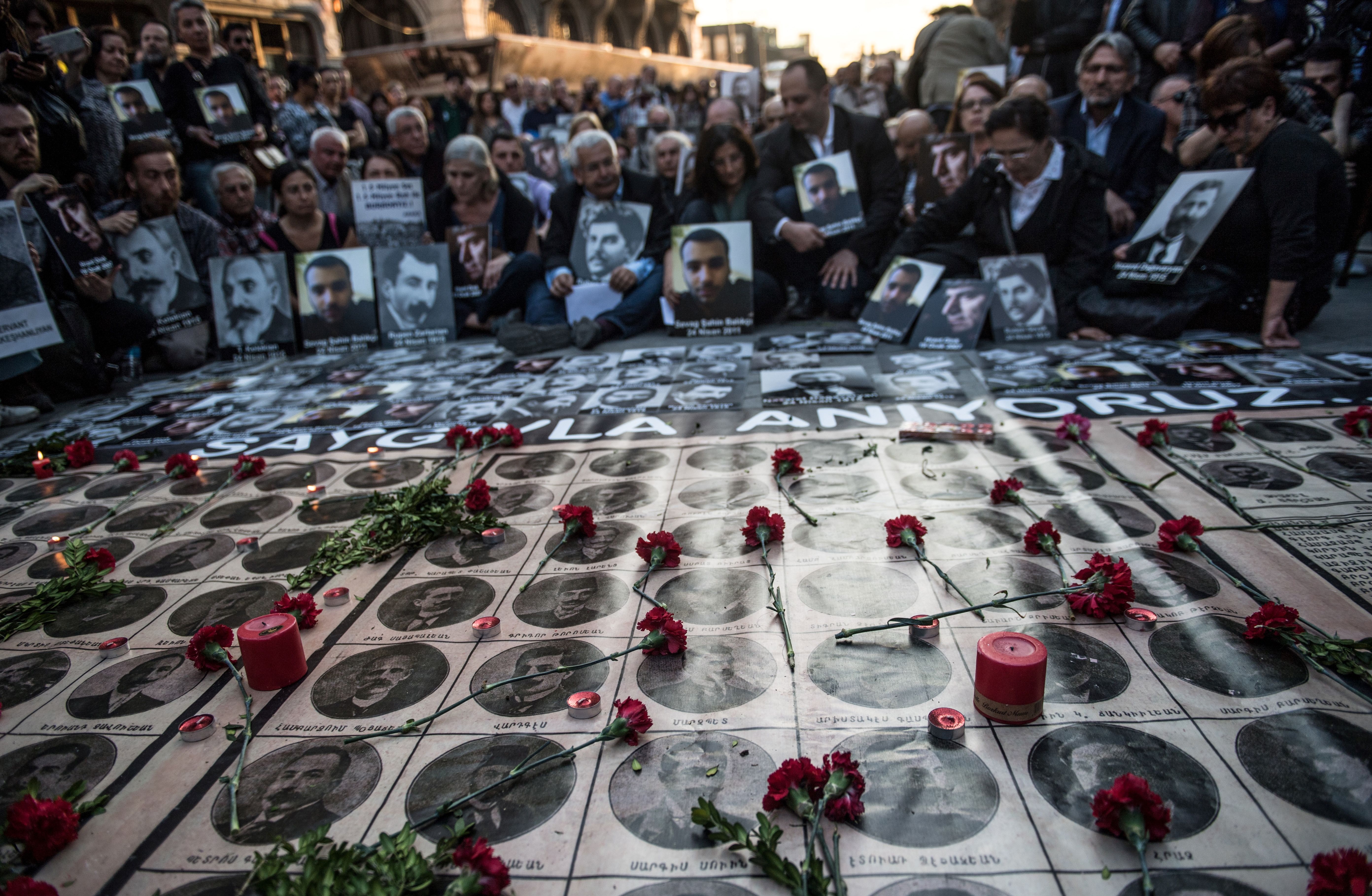 People hold portraits of Armenian intellectuals – who were detained and deported in 1915 – during a rally on Istiklal Avenue in Istanbul. (BULENT KILIC/AFP via Getty Images)

Despite the significant aid the U.S. provided to victims of the genocide through the Near East Relief Act, no U.S. president has referred to the systematic killings as “genocide” since President Ronald Reagan.

The House and Congress affirmed the American record on the Armenian Genocide in 2019 by passing resolutions.

“The Congress of the United States of America has spoken with the overwhelming passage last year of H. Res. 296 and S. Res. 150 upholding America’s record of recognition and condemnation of the Armenian Genocide,” Bryan Ardouny, the Executive Director of the Armenian Assembly of America told Daily Caller.

“As Americans, we can take great pride in America’s unprecedented humanitarian relief at that time, including the American Military Mission to Armenia, led by Major General Harbord, General John J. Pershing’s Chief of Staff during World War I, who submitted his report from the U.S.S. Martha Washington in 1919,” Ardouny added.