With lockdown orders across the country barring people from packing into restaurants and bars, many business owners in the industry are operating solely off of takeout and delivery orders.

Many customers rely on food delivery from online apps and websites like UberEats, GrubHub, and DoorDash, and since the COVID-19 pandemic began spreading across the United States, business has been booming for delivery services.

“Spending on meal delivery services was up 70% year-over-year in the last week of March, according to credit-card data from research firm Second Measure,” Barron’s reported. Furthermore, data indicates that the size of food orders has increased by 24%.

GrubHub released data showing that the surge in orders has led to many food items becoming vastly more popular than usual, including breakfast foods like sausage, egg and cheese sandwiches and donuts. Orders for comfort foods like burgers, mac and cheese, and sugary pies and cupcakes are also up.

The demand is so high that on Friday nights, the apps have experienced outages.

However, the crunch in demand has led to some tensions between restaurants and delivery companies over pricing. 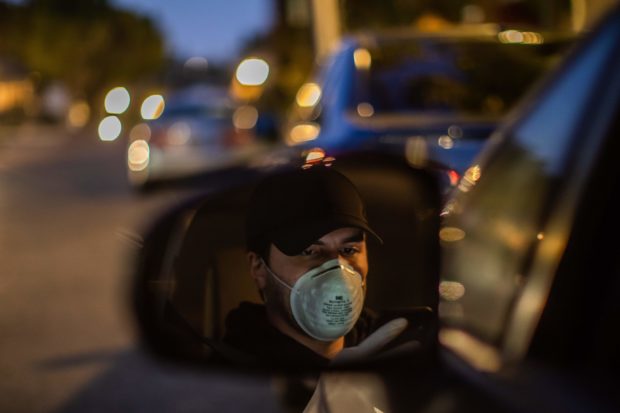 Musician Lucas Goes wears a mask and gloves as he checks his phone while delivering food for a delivery app in Beverly Hills, California on April 2, 2020, after losing his job during the novel coronavirus outbreak. – A staggering 10 million US workers have lost their jobs in the second half of March as the coronavirus forced stores and businesses nationwide to close their doors. Photo by Apu GOMES / AFP

GrubHub ran an ad this month titled “Save The Restaurants,” touting their delivery service as a way for consumers to support businesses they would usually patronize in normal times.

Earlier this month, three individuals from New York City filed suit against GrubHub, Uber Eats, DoorDash, and Postmates over their pricing, alleging that the companies’ pricing practices are forcing restaurants to raise their prices for non-delivery meals, which also has the effect of pushing consumers toward using the apps more, putting more money into the pockets of the delivery services.

“In a proposed class action filed in Manhattan federal court, three consumers said the defendants violated U.S. antitrust law by requiring that restaurants charge delivery customers and dine-in customers the same price, while imposing ‘exorbitant’ fees of 10% to 40% of revenue to process delivery orders,” Reuters reports. “The consumers, all from New York, said this sticks restaurants with a ‘devil’s choice’ of charging everyone higher prices as a condition of using the defendants’ services.” 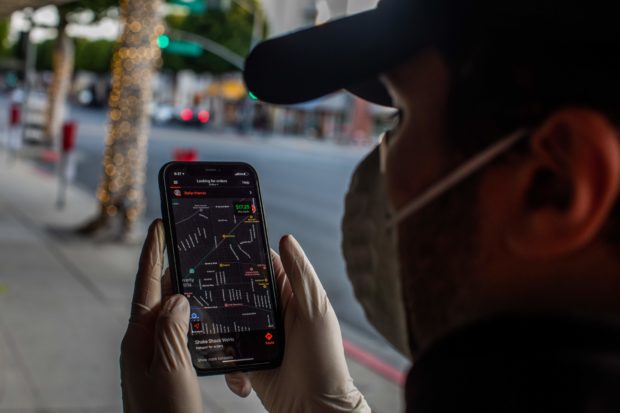 Musician Lucas Goes wears a mask and gloves as he checks his phone while waiting for an order on a delivery app in Beverly Hills, California on April 2, 2020, after losing his job during the novel coronavirus outbreak. Photo by APU GOMES/AFP via Getty Images.

Anecdotally, a story published in the Chicago Tribune this month outlined how many restaurants have become exasperated with delivery apps like GrubHub, not just because of the fees, but also due to the reliance on outside drivers who they have no control over. 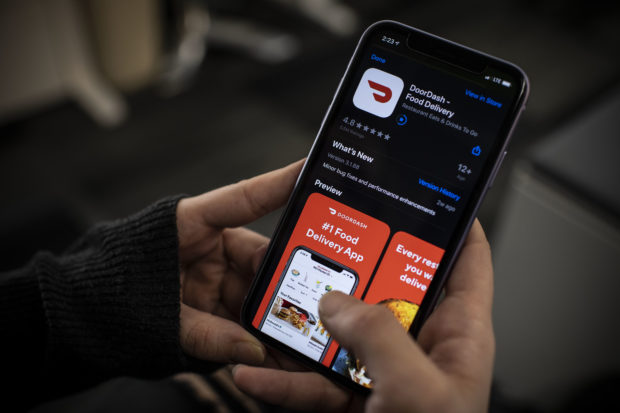 An AFP journalist checks the DoorDash food delivery application on her smartphone on February 27, 2020 in Washington, DC. – DoorDash on February 27, 2020 began the process of going public with a US stock offering that could value the popular restaurant meal delivery service at more than $10 billion. Photo by ERIC BARADAT/AFP via Getty Images

The troubles encountered by these delivery services reflect the larger trend of the gig economy being disproportionately impacted by the current pandemic.

The Daily Caller reported on tensions between grocery delivery service Instacart and its workers earlier this month.

A “union” of Instacart workers, who are independent contractors and not actually employees, staged a strike to protest their working conditions.

The Instacart workers organized a strike to protest not having sanitizer and the hazard pay benefits they demanded. In a statement to the Caller, the company denied that the strike had a disparate effect on business, and also said that the company has already taken steps to protect workers’ health.

“In the last four weeks, Instacart has introduced more than 15 new product features, new health guidelines, new shopper bonuses, new sick leave policies, and new safety supplies, as well as pay for those affected by COVID-19,” a spokesperson told the Caller. (RELATED: Some Deal Will Have To Be Struck With Gig Economy Workers, Could It Be Unions?)

“Our team has an unwavering commitment to safely serve our shoppers in the wake of COVID-19, and we’ll continue to share additional updates over the coming days, weeks and months ahead as we further support this important community.” 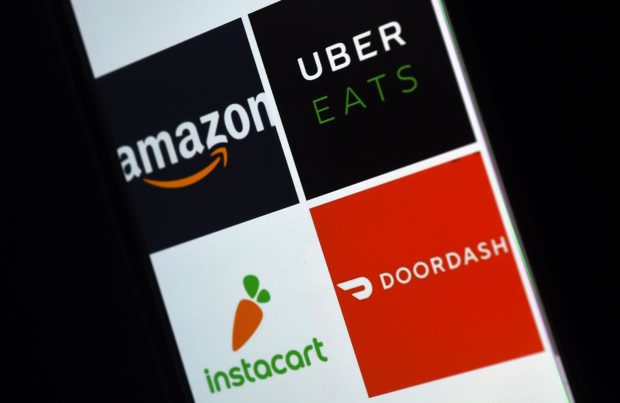 This illustration picture shows delivery applications logos from Amazon, Uber Eats, Instacart and Doordash displayed on a smartphone on April 10, 2020, in Arlington, Virginia – More and more people use the delivery apps as they are sheltering at home,avoiding going out as much as possible due to the coronavirus outbreak. Photo by OLIVIER DOULIERY/AFP via Getty Images.

Politicians are taking notice, too. Many progressives were already skeptical of the gig economy’s treatment of workers even before the pandemic.

Labor, labor – read all about it!

Your Direct Action for today: Don’t take an Uber or Lyft just for the day. (Just today! Cabs are fine! You can do it!)

It’s a small but big way you can help all the drivers you’ve met get paid more to feed their families + support themselves. https://t.co/oaQZsYqukV

“Under Bernie’s plan, companies will no longer be able to ruthlessly exploit workers by misclassifying them as independent contractors or deny them overtime by falsely calling them a ‘supervisor,'” his campaign website reads. “When Bernie is president, his administration will end the ability of corporations to misclassify workers as ‘independent contractors’ or label them as a ‘supervisor.'” (RELATED: Private Partnership Sets Up Healthcare Coverage For Gig Economy Workers During COVID-19)

With progressives already looking to regulate the gig economy, and the restaurant business souring on these apps as well, it’s looking like the gig economy is making itself some formidable enemies.

However, the only real consequences will come if Americans stop using them, and if the last month is any indication, people don’t seem to have any plans of stopping anytime soon.