Former FBI counterintelligence official Peter Strzok intervened at the last minute in early 2017 to stop the bureau from closing an investigation into Michael Flynn, the incoming national security adviser, according to government files unsealed Thursday.

The FBI was investigating Flynn and several other Trump campaign associates at the time for possible links to Russia as part of Crossfire Hurricane. But as of Jan. 4, 2017, the FBI’s Washington Field Office had determined that there was no justification to continue investigating Flynn, whom the FBI referred to with the code name “Crossfire Razor.”

“The FBI is closing this investigation. If new information is identified or reported to the FBI regarding the activities of CROSSFIRE RAZOR, the FBI will consider reopening the investigation if warranted,” the memo stated.

A review of intelligence databases “did not yield any information” to justify continuing an investigation of Flynn, which focused on whether the retired lieutenant general was wittingly or unwittingly working on behalf of the Russian government, according to the memo. (RELATED: FBI Official Questioned Whether Goal Of Flynn Interview Was ‘To Get Him To Lie’)

“Hey if you haven’t closed RAZOR don’t do so yet,” Strozk wrote to an FBI colleague. 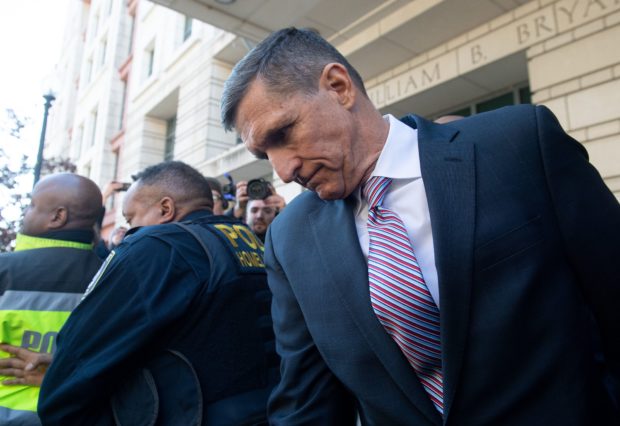 Michael Flynn leaves after the delay in his sentencing hearing at US District Court in Washington, DC, December 18, 2018. (SAUL LOEB/AFP via Getty Images)

The memo and text messages were part of a batch of FBI documents unsealed Thursday in Flynn’s legal case. Lawyers for Flynn are trying to convince a judge to throw out Flynn’s case, arguing that the FBI trapped him into lying during a White House interview on Jan. 24, 2017.

Andrew McCabe, who served as deputy director of the FBI, called Flynn to arrange the interview. He dispatched Strzok and another FBI agent to interview Flynn regarding phone calls he had in late December 2016 with Sergey Kislyak, who then served as Russia’s ambassador to the United States.

Documents unsealed on Wednesday showed that the FBI team strategized on how to approach the Flynn interview. Bill Priestap, who was Strzok’s boss, wrote a note asking whether the goal of the interview was to force Flynn to lie, in order to either lead to his prosecution or his firing.

Flynn pleaded guilty on Dec. 1, 2017, to lying during the interview about speaking to Kislyak about sanctions against Russia. But he said in a Jan. 29, 2020, court filing that he pleaded guilty to protect prosecutors from going after his son. He denied lying in the FBI interview.

The newly released documents do not show Strzok’s rationale for stopping the Flynn investigative file from being closed. It is unclear when Strzok and the Crossfire Hurricane team received evidence of Flynn’s phone calls with Kislyak, which were reportedly monitored because of Kislyak’s position in the Russian government.

The FBI opened the Crossfire Hurricane investigation on July 31, 2016. The initial targets of the probe were Flynn and former campaign aides Carter Page, George Papadopoulos and Paul Manafort.

Investigators could find no evidence that any Trump associates were conspiring with Russia or working as agents of the Kremlin, the inspector general’s report stated.

Strzok was removed from the special counsel’s probe in July 2017 after the discovery of text messages he exchanged with FBI attorney Lisa Page. The messages showed the pair speaking negatively about Donald Trump. Strzok was fired in August 2018.