A majority of Americans say the Steele dossier’s allegations of collusion between Donald Trump and Russia are accurate, even though two government reports have poured cold water on the salacious Democrat-funded document, according to a recent poll.

The survey, released by the Center for American Political Studies at Harvard University and The Harris Poll, asked 2,394 registered voters the question:

“Do you think that the Steele dossier, with its accusations of Trump’s relationships to Moscow, was real in its findings of Trump colluding with the Russians or was the Steele dossier just campaign opposition research documents fueled by a Russian disinformation campaign?”

Fifty-three percent of respondents said they believed the dossier, written by former British spy Christopher Steele, compared to 47% who said they believe it is the product of Russian disinformation.

Opinions broke along partisan lines, with 77% of Democrats saying they believe the dossier, compared to just 29% of Republicans.

The poll was conducted between April 14 and April 16.

The results suggest that the majority of respondents either have not kept track of developments in the dossier saga, or do not believe a series of revelations that have undermined Steele’s credibility. (RELATED: DOJ Watchdog Puts Final Nail In Steele Dossier’s Coffin)

The special counsel’s report poured cold water on Steele’s main assertion that the Trump campaign was involved in a “well-developed conspiracy of cooperation” with the Kremlin. Investigators found no evidence that Trump associates conspired with the Russian government or acted as agents of the Kremlin, according to the report. 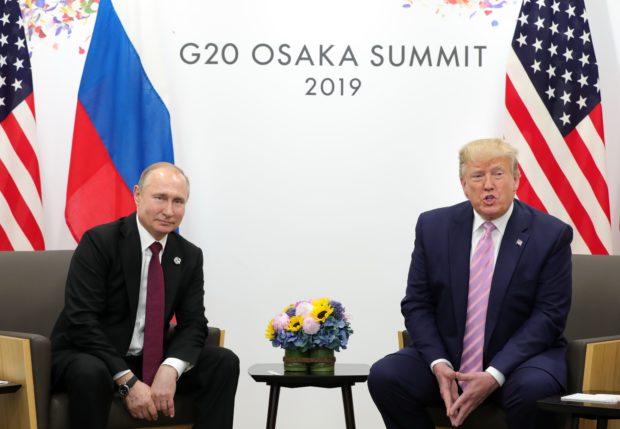 Russian President Vladimir Putin and US President Donald Trump hold a meeting on the sidelines of the G20 summit in Osaka on June 28, 2019. (Photo by MIKHAIL KLIMENTYEV/AFP/Getty Images)

A Justice Department inspector general (IG) delved further into the dossier and its sources.

Steele’s primary source of information for his Trump-Russia project disputed many of the major claims in the dossier, according to the report. Steele himself told his FBI contacts on Oct. 3, 2016, that he believed that a major sub-source for the dossier was a “boaster” and “embellisher.”

The IG report also said that the FBI received evidence in 2017 that Russian intelligence operatives might have fed disinformation to Steele.

The report cited evidence regarding Steele’s memos claiming that former Trump lawyer Michael Cohen visited Prague in August 2016 to meet with Kremlin operatives, and the dossier’s most eye-catching allegation: that the Russians have video of Trump with prostitutes in Moscow in 2013.

The IG report went further, saying that the U.S. intelligence community gave the FBI a report in June 2017 that laid out evidence that two Russian intelligence operatives knew in July 2016 that Steele was investigating Trump.

The majority support for the dossier is a testament to the media’s coverage of the Russia investigation during Trump’s tenure, according to Mollie Hemingway, a senior editor at The Federalist who spotted the Harvard-Harris poll.

“It’s nothing short of a scandal that 53 percent of Americans believe that this completely discredited document ‘was real in its findings of Trump colluding with the Russians,” she wrote.

“But how could they think otherwise?”

“While the false Steele dossier was legitimized and parroted daily for three years in every major media outlet, the IG findings of its falsehood were buried.”

National news outlets that reported breathlessly on developments in the special counsel’s investigation have largely ignored the release of the IG footnotes.