Christians in Pakistan are being forced to to clean sewers, a job their Muslim caste-system superiors avoid and relegate to Christians who are commonly referred to as “dirty,” the New York Times reported.

Lower-caste Hindus, but specifically Christians, are expected to take the dangerous and unsanitary sewer cleaning jobs in Pakistan and are heavily discriminated against by Muslims, who sit at the top of the hierarchy in the country, according to the New York Times.

In Pakistan, where caste-based discrimination is sometimes explicitly encouraged by the state, Christians fill about 80% of sewer sweeping jobs while making up only 1.6% of Pakistan’s population. Before being removed, the Pakistani military placed an ad in the newspaper for sewer cleaners with the caveat that only Christians should apply. It was only removed after activists protested, the New York Times reported.

Workers often don’t wear masks or gloves and must clean through stinking sludge, gas, and cockroaches, using their bare hands to unclog drain pipes of feces.

One Christian man described watching his cousin die of asphyxiation from fumes inside the sewer. 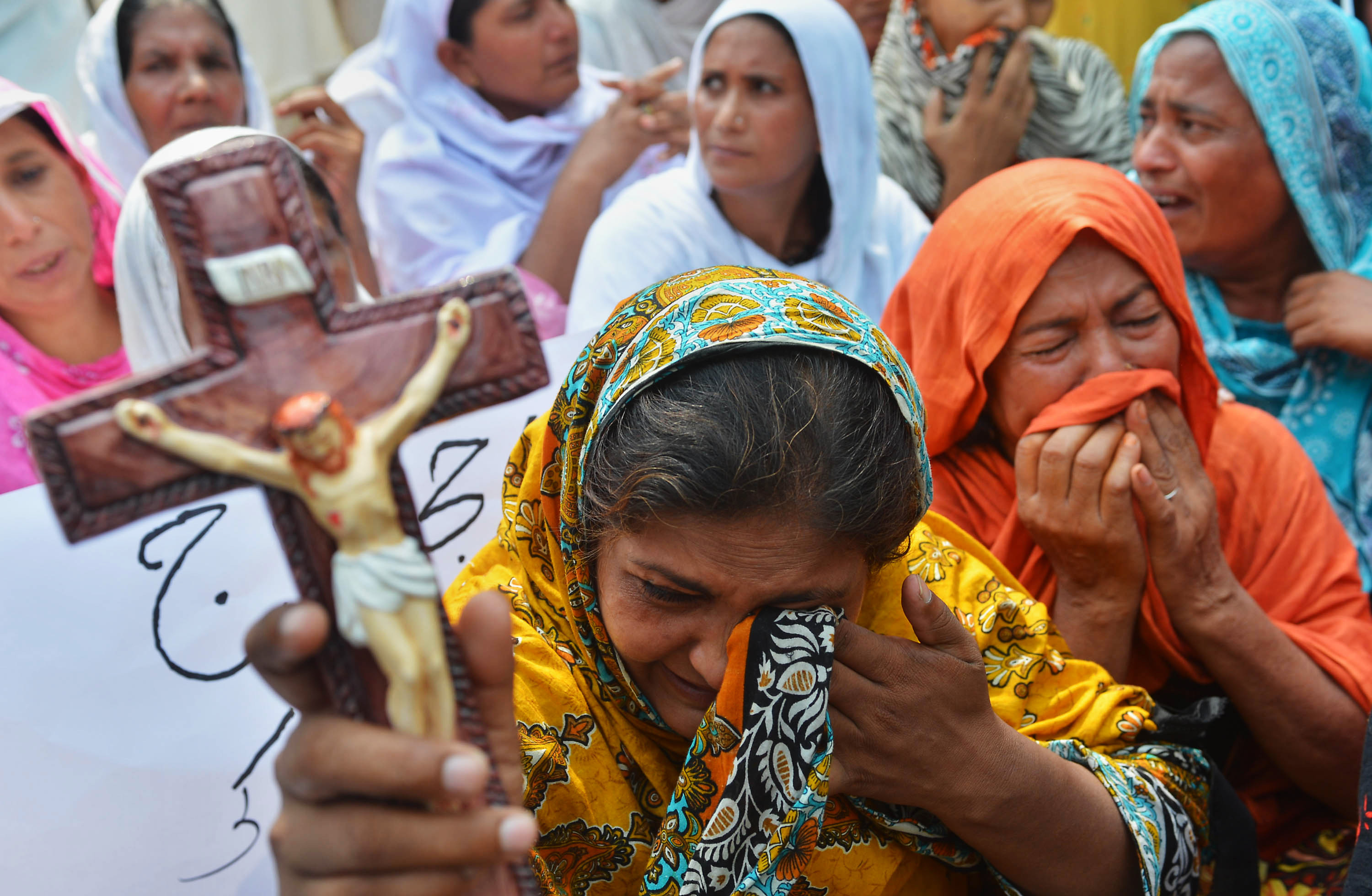 Pakistani Christians protest against the suicide bombing in All Saints church in the northwestern city of Peshawar on September 23, 2013. (A Majeed/AFP via Getty Images)

Christians are expected to follow in the footsteps of their fathers and become sewer cleaners, with even children discriminated against and forced to adopt the lifestyle. Christians are referred to as “dirty” among Muslims. Doctors often refuse to treat sewer cleaners, who are seen as unclean and untouchable.

Before beginning his work day underneath Karachi’s streets to unclog sewers, Jamshedpur Eric told the New York Times he says a “little prayer to Jesus to keep him safe.”

Jamshed adds that the odor of sewage never really leaves him. “When I raise my head to my mouth to eat, it smells of sewage.”

Pakistan ranks among the top nations where Christians face extreme persecution, according to Open Doors. After Pakistan officially became a Muslim state in 1947, Christians began suffering from institutionalized discrimination and are viewed as second-class citizens. 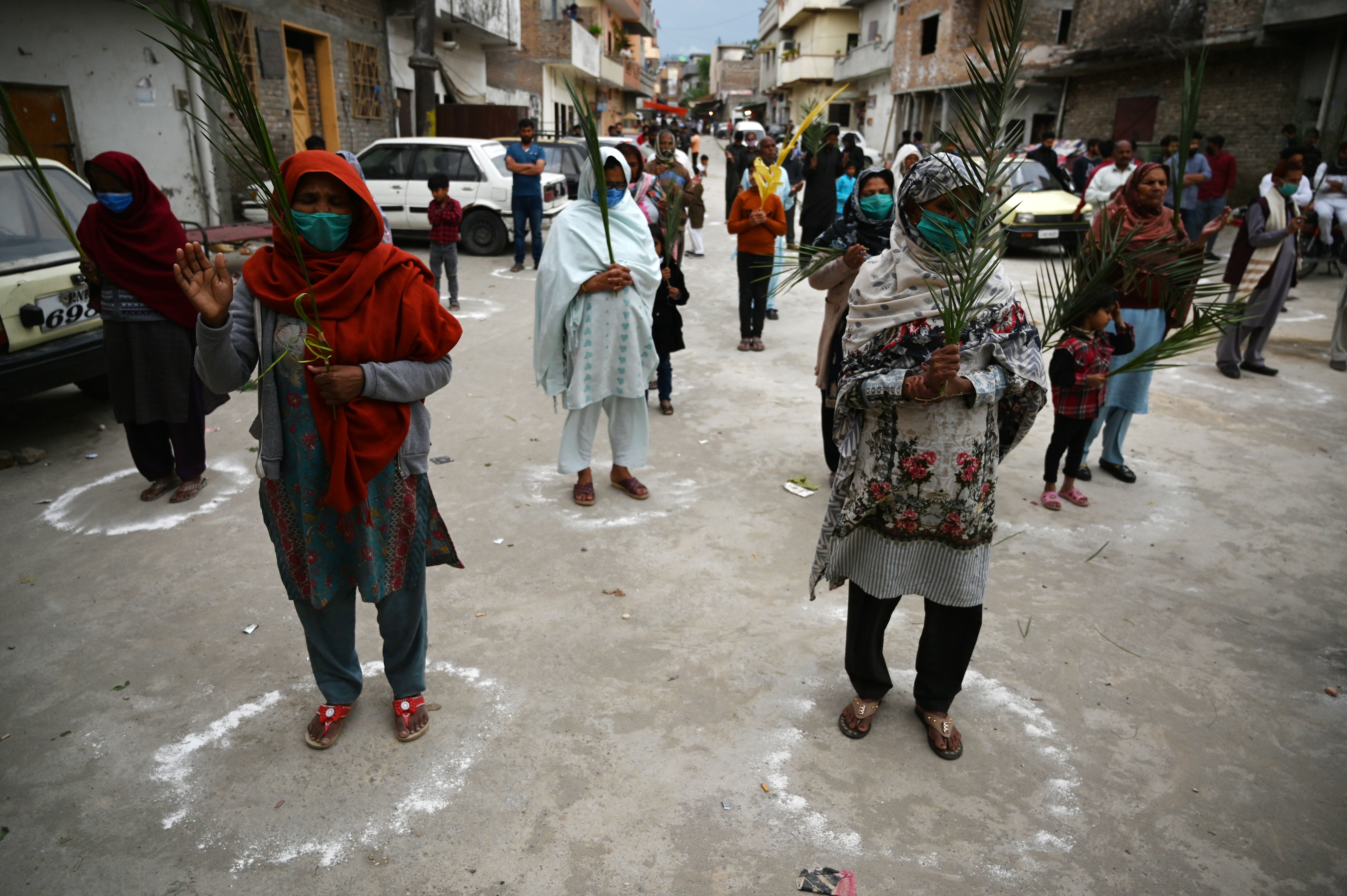 Christian devotees stand in circles marked on the ground to maintain social distancing as they hold palm branches to celebrate a Palm Sunday event at the Christian neighborhood during a government-imposed nationwide lockdown. (Photo by AAMIR QURESHI/AFP via Getty Images)

The case of Asia Bibi, a Christian woman accused of blasphemy in Pakistan, sparked global awareness in 2010. Before Pakistan’s Supreme Court overturned her conviction and death sentence in 2018, her family went into hiding and claimed they were being hunted down by extremists. She arrived in Canada to start her new life in 2019. (RELATED: Christian Woman Asia Bibi Is Free To Leave Pakistan After Supreme Court Rules Against Execution)