Tara Reade, who has accused former Vice President Joe Biden of sexually assaulting her, said she filed a complaint in 1993 that, if unveiled, would vindicate multiple details of her allegations. The presumptive presidential nominee recently requested the secretary of the Senate to locate the complaint and make it public.

But confusion surrounds the location and contents of the complaint Reade says she filed 27 years ago when she worked as a Senate staffer for Biden in 1993. Reade has accused the then-senator of kissing her, touching her and penetrating her with his fingers without her consent.

Biden denied the allegations publicly for the first time Friday morning on MSNBC. His campaign has also denied the assault, saying it “absolutely did not happen.”

The former vice president also said Friday that he is “absolutely positive” that no one he knows of “was ever made aware of a complaint” made against him by Reade. He requested that the secretary of the Senate locate and make public any such complaint, if one exists.

Reade has said that after the alleged assault, she complained about sexual harassment to three Biden staffers: Marianne Baker — Biden’s executive assistant — and Dennis Toner and Ted Kaufman, who were both top Biden aides.

But these Biden aides did not take action, prompting her to file a written complaint with a Senate personnel office, Reade told the DCNF. She was told that someone would call her in for a full discussion and meeting, but “that never happened,” she said.

It is unclear what office that Reade filed the complaint in. Complaints like Reade’s were typically handled by the Senate Office of Fair Employment Practices in 1993, which was later replaced by the Office of Congressional Workplace Rights (OCWR) following the passage of the Congressional Accountability Act in 1995.

The Biden accuser said she does not have a copy of the complaint and tried to track it down in 2019. She was told that “it would have gone back to Joe Biden’s office, to the chief of staff,” she said, but she said she is unsure who told her this. (RELATED: With No Lawyer Or Public Relations Rep And Little Backing From Prominent Women’s Groups, Tara Reade Stands Alone)

Reade said that after she complained about harassment, Biden staff members took away most of her duties, told her she was not a good fit and put her in an isolated workstation. She said she was also instructed to put “special projects” on her resume as her new title, was told not to interact with staff or interns, and was told that she had 12 months to find a new job.

Reade told the DCNF this treatment was new and had not occurred before the alleged assault took place. She called this treatment retaliation and said that it pushed her to file the complaint.

Both Kaufman and Toner have said they do not know Reade in interviews with the New York Times, and Baker has said she never heard of or witnessed reports of inappropriate conduct and has no memory of Reade’s story. The Biden campaign did not respond to a request for comment on the matter.

What Would Be In The Complaint?

The complaint in question does not mention Biden’s alleged assault, Reade confirmed to the DCNF Saturday following a report from the Associated Press that the publication originally headlined “Exclusive: Harassment, assault absent in Biden complaint.”

Reade told the DCNF that though the AP’s headline was misleading, the substance of the story was correct and that the headline was “just to get attention.” The AP later updated the story to reflect that “while Reade says she did not specifically use the words ‘sexual harassment’ in the complaint, she says the behavior she was describing amounts to sexual harassment.”

Reade told the DCNF that though she is not positive that she checked any box on the form to indicate that it was a sexual harassment complaint, she is certain that she described details of the alleged sexual harassment and retaliation by Biden aides in the complaint. She was too scared to discuss the sexual assault on the intake form, she added, as she was unsure where it would end up.

If this complaint were located and published, it would show that Biden’s staff members lied on the record when they said they did not have meetings with her, Reade said. She also said it would confirm that there were issues she brought to her supervisors, such as her allegation that Biden asked her to serve drinks at a fundraiser because he liked her legs.

Reade has also told Business Insider that Kaufman took notes when she spoke with him — notes that she believes would be in her personnel file with her complaint, her separation letter, and other records, such as references to her sick days.

Where Is The Complaint?

It’s unclear where such a complaint would be located. It’s been suggested that the complaint may be housed with Biden’s Senate records at the University of Delaware, in the National Archives or in the U.S. Senate.

The collection of the documents held at the college alone fills 1,875 boxes and includes 415 gigabytes of electronic records, according to WaPo, containing committee reports, drafts of legislation and correspondence.

But the University of Delaware refused to provide the DCNF with even the agreement detailing why the school cannot release Biden’s records, saying that the “gift agreement signed when the papers were donated is not a public document.”

Reade originally told the DCNF that she believes the complaint would be housed with those records and called on Biden to release the documents in an exclusive interview with the DCNF on April 28. (RELATED: EXCLUSIVE: ‘Joe Biden, I Want You To Release The Personnel Records’: Tara Reade Demands Transparency From Biden)

But when Biden appeared on MSNBC on Friday, he insisted that Reade’s complaint, if it exists, would not be included in his Senate documents at the university and that these documents “could be taken out of context” if fully released. 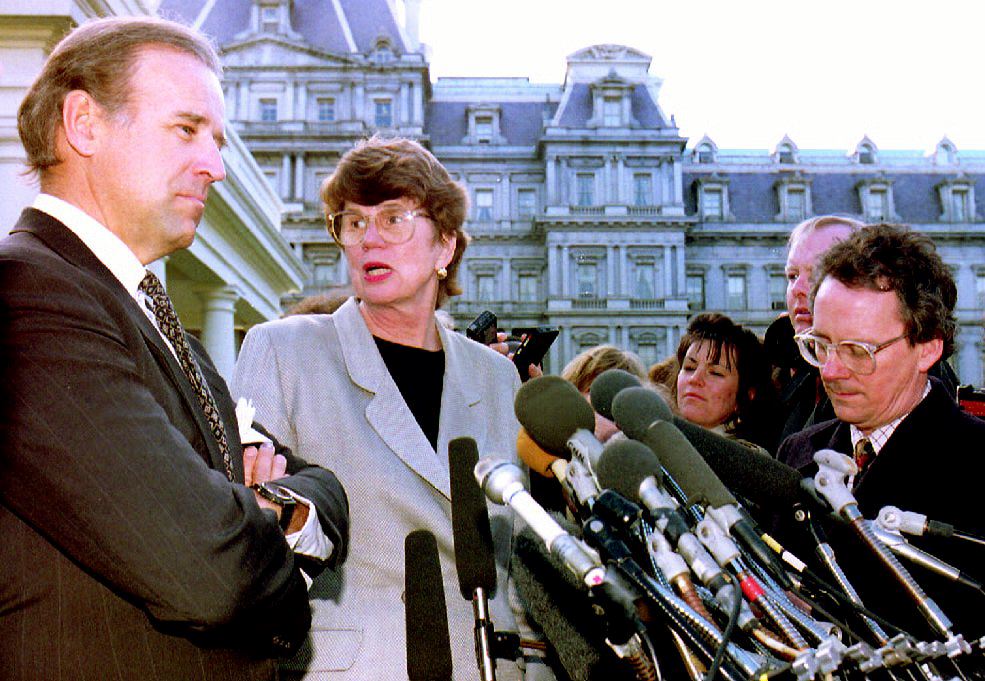 Attorney General Janet Reno turns to answer a question from a reporter as she and Joseph Biden leave the White House. (J.DAVID AKE/AFP via Getty Images)

Biden also repeatedly said that it would be fruitless to search for Reade’s name in those records, adding that if Reade ever filed a complaint, it would have been filed in the U.S. Senate and that it would be stored in the National Archives.

The National Archives debunked this idea later on Friday, noting in a statement to the DCNF that “any records of Senate personnel complaints from 1993 would have remained under the control of the Senate.”

The Office of Congressional Workplace Rights — another possible location to find a complaint filed by a Senate staffer — refused to tell the DCNF whether any specific claim “may or may not have been filed with the office” in order to protect the confidentiality of “all claimants.”

Biden requested Friday that the secretary of the Senate “take or direct” any necessary steps to find out whether Reade ever issued a sexual harassment complaint against him and to make this complaint public if found.

A Hitch In Locating The Complaint

Secretary of the Senate Julie Adams said in a Monday statement that her office could not comply with Biden’s request and that her office cannot even acknowledge the existence of a complaint filed by Reade without violating disclosure laws.

“The Secretary’s Office was advised by Senate Legal Counsel that disclosing the existence of such specific records would amount to a prohibited disclosure under the Government Employee Rights Act of 1991,” said Senate secretary spokeswoman Sydney Butler in a statement.

Even if Reade were to request that records from her complaint be released, the office would still be prohibited from authorizing the release of any records, Butler added.

“We are not aware of any exceptions in law authorizing our office to disclose any such records that do exist, if any, even to original participants in a matter,” the spokeswoman said. She has not responded to a request for additional comment.