Anti-lockdown protests around the country are taking an increasingly hostile tone, with some demonstrators calling for Dr. Anthony Fauci and Bill Gates to be jailed, and some even using swastikas on signs to compare them to Nazis.

“Imprison Gates Fauci and Newsom For Crimes against HUMANITY,” one woman’s sign read during a rally in California Friday, with swastikas around Gates’ name. 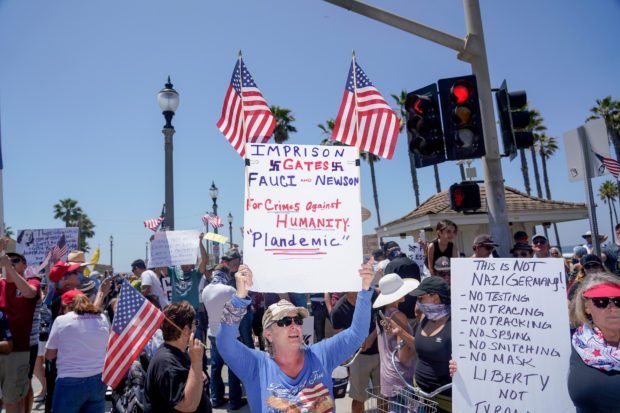 “This is not Nazi Germany! No testing, No tracing, No tracking, No spying, No snitching, No mask, Liberty Not Tyranny,” another woman’s sign read. 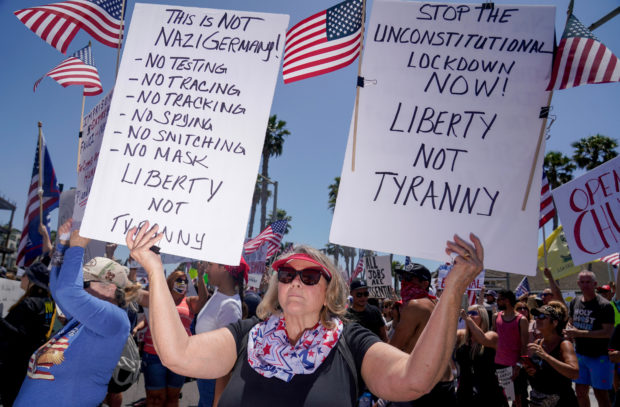 “DEMOCRATS are doing everything to DESTROY TRUMP!! the ECONOMY and YOU are just COLLATERAL DAMAGE,” another sign read. 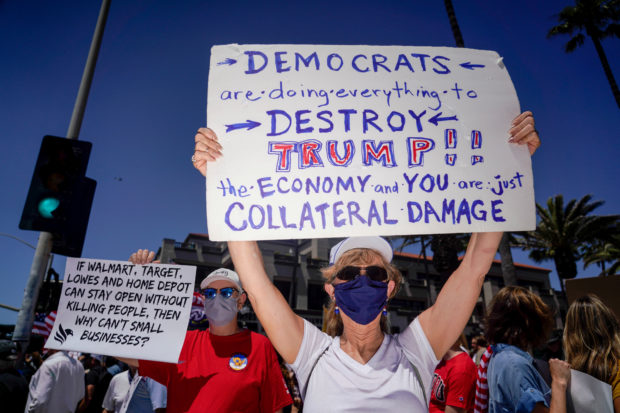 During a rally in Boston, Massachusetts Monday, there were more anti-Gates and anti-Fauci signs too. 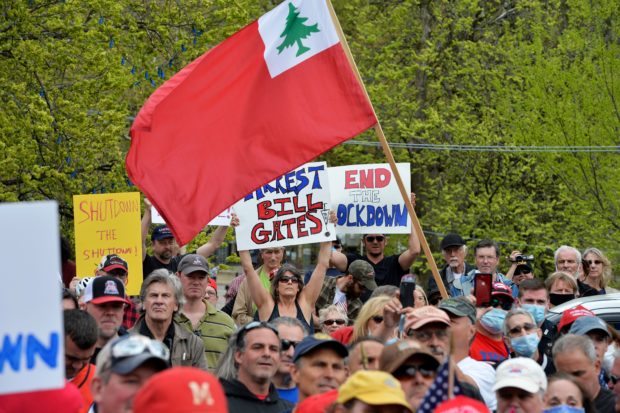 Protesters rally, to demand an end to the state wide ‘stay at home advisory’ and the new law enforcing everyone to wear a mask in public, outside the Massachusetts State House in Boston, Massachusetts on May 4, 2020. JOSEPH PREZIOSO/AFP via Getty Images

“Lock Up Fauci Gates For Crimes Against Humanity,” one man’s sign read. 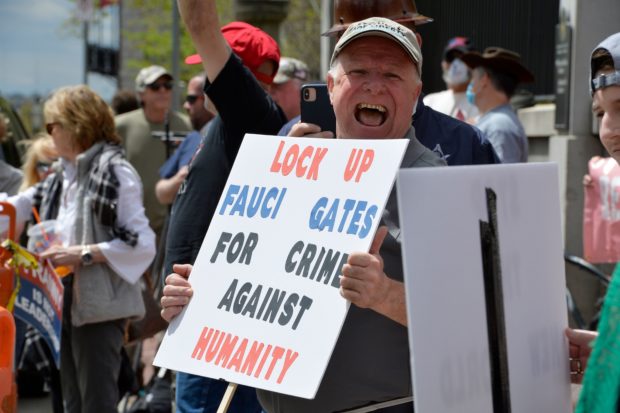 “Dr. Fauci are you are criminal,” one man’s sign said. 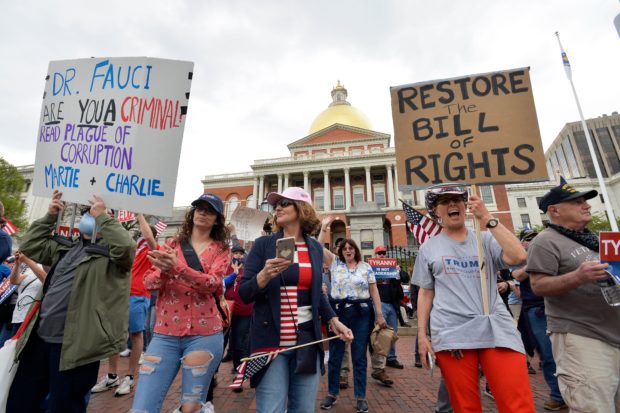 Inflammatory signs have been present nationwide. In Michigan, one of the first demonstrations that got significant attention, one woman held a sign reading “Heil Witmer” with a swastika-esque symbol on it. 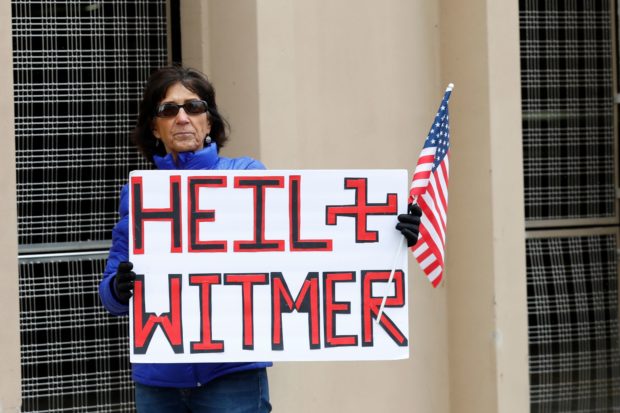 People protest against excessive quarantine amid the coronavirus pandemic at the Michigan State Capitol in Lansing, Michigan on April 15, 2020. JEFF KOWALSKY/AFP via Getty Images

In another Michigan protest on April 30th, a man held a sign reading “Bill Gates is EVIL.” 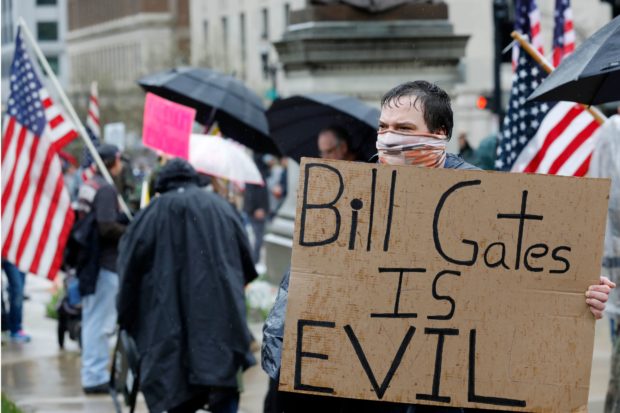 Demonstrators take part in an “American Patriot Rally,” organized on April 30, 2020, by Michigan United for Liberty on the steps of the Michigan State Capitol in Lansing, demanding the reopening of businesses. JEFF KOWALSKY/AFP via Getty Images 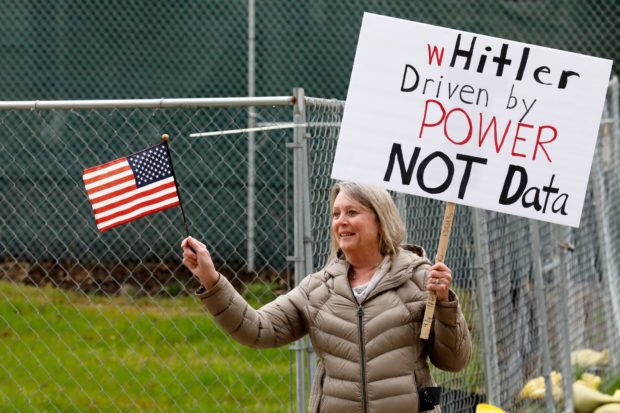 Another man had a sign appearing to portray Michigan Governor Gretchen Whitmer with a swastika and Hitler mustache. 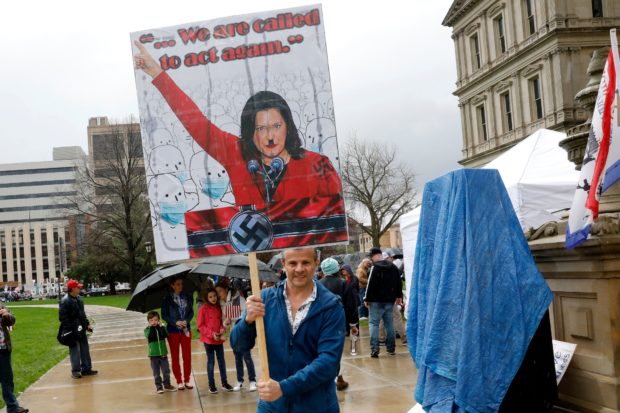 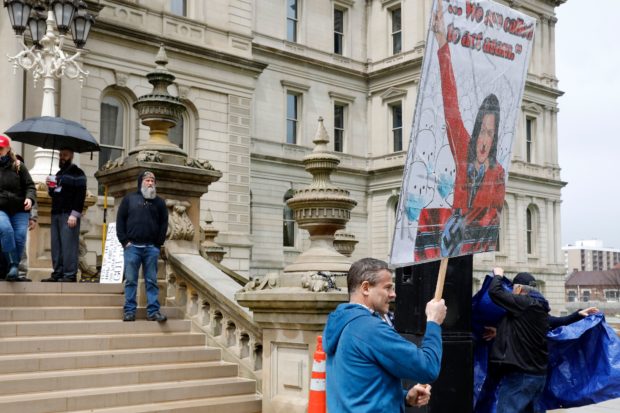 Over the last month, there have been many demonstrations all across the country in defiance of lockdown orders. (RELATED: ‘Fire Fauci!’ — Anti-Lockdown Protesters Erupt At Texas State Capitol)

“The Governor of Michigan should give a little, and put out the fire. These are very good people, but they are angry,” Trump said in a tweet.

“They want their lives back again, safely! See them, talk to them, make a deal.”