Moments before Ahmaud Arbery was shot in Georgia by two men, police received two 911 calls from people reporting a black male jogger and a man in a house under construction, numerous sources reported.

Arbery, 25, was jogging in the Satilla Shores neighborhood Feb. 23 when he was shot and killed by Gregory McMichael and Travis McMichael, father and son.

Chilling video has emerged of a 25-year-old African-American man being chased down & killed in a Brunswick, Ga., neighborhood; Ahmaud Arbery was out jogging, his family says.

Warning: viewer discretion is advised. @OmarVillafranca has more on the growing calls for justice pic.twitter.com/6DyPKDbiRN

No one has been arrested or charged in the case, which sparked outrage following the release of a video the week of May 4 depicting Arbery, who was declared unarmed, being chased down by the two men and being shot and killed. (RELATED: Viral Video Shows Unarmed Black Jogger Being Shot To Death By Two White Men)

Police received a call at 1:08 p.m. from an unidentified person who reported “a guy in a house right now, a house under construction,” the Guardian reported.

When the dispatcher asks if someone is breaking into the property, the caller says “no, it’s all open, it’s under construction.” He then says “he’s running right now!” When asked what the man is doing, the caller responds “He’s running down the street.”

The dispatcher says she’s sending police to the neighborhood. “I just need to know what he was doing wrong. Was he just on the premises and not supposed to be?”

The caller responds that “he’s been caught on camera a bunch before at night. It’s kind of an ongoing thing out here.” He describes a black male in a white shirt.

The second call was received minutes later at 1:14 p.m., the Guardian reported. The dispatcher asks for the address and reason for the call. The man responds “Uh, I’m out here at Satilla Shores. There’s a black male running down the street.”

The dispatcher asks for a specific location. The caller responds “I don’t know what street we’re on.”

The dispatcher says “Sir, hello, sir” but receives no answer. The 911 call continues to record for nearly five more minutes.

Authorities have not released the identities of the callers.

The elder McMichael was a former investigator in the Brunswick district attorney’s office and only recently retired, prompting Brunswick and Waycross Counties’ district attorneys to recuse themselves from the case due to conflicts of interest. 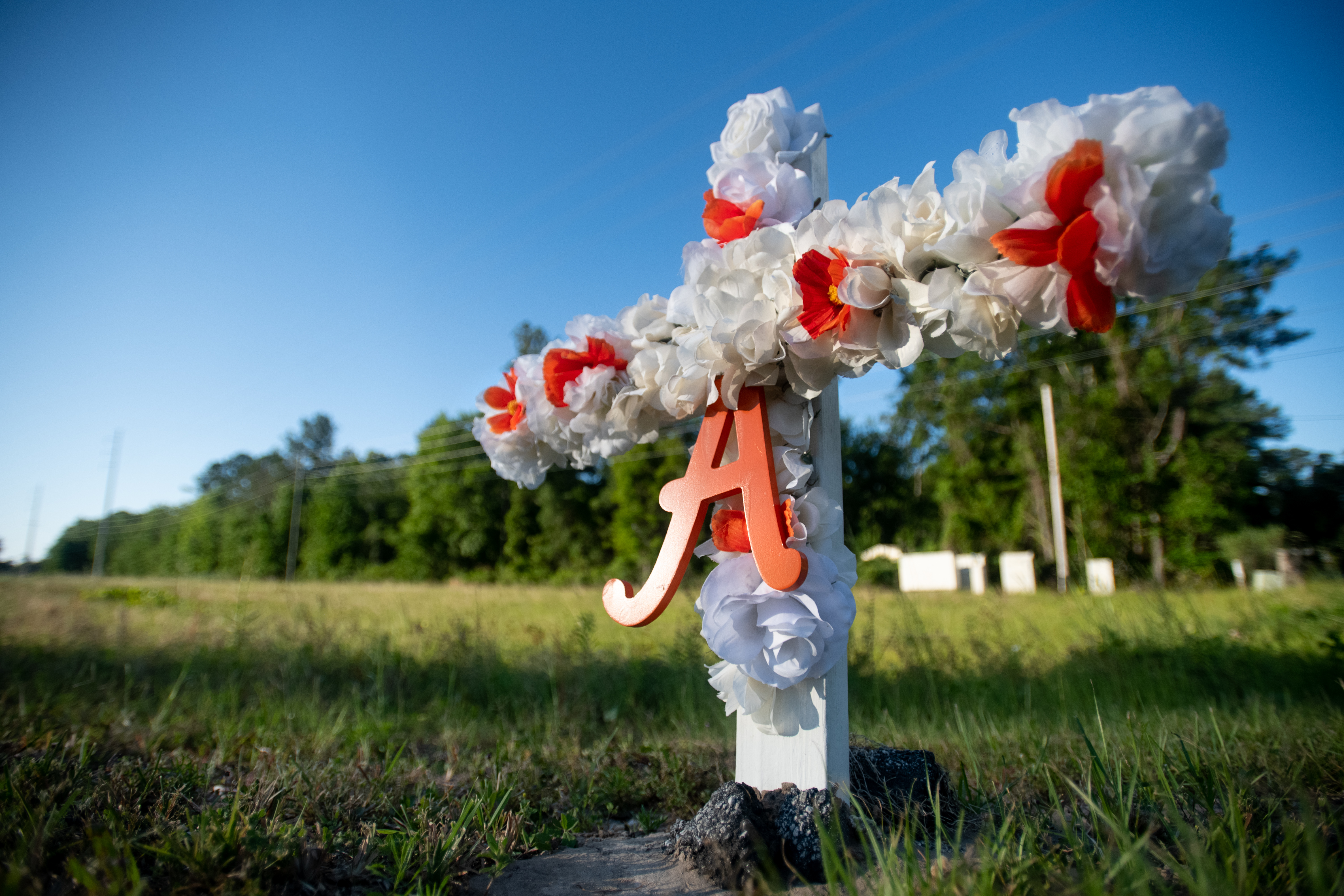 A cross with flowers and a letter A sits at the entrance to the Satilla Shores neighborhood where Ahmaud Arbery was shot and killed May 7, 2020 in Brunswick, Georgia. (Photo by Sean Rayford/Getty Images)

The conflicts of interest and coronavirus pandemic — which delayed grand juries from meeting through June 12 — appear to have delayed action by law enforcement.

A Georgia prosecutor has called for a grand jury investigation into Arbery’s death.

“After careful review of the evidence presented,” Tom Durden, District Attorney of Georgia’s Atlantic Judicial Court, said in a statement according to Time. “I am confident the case should be presented to the grand jury of Glynn County for consideration of criminal charges.”