On May 8, 1945 — 75 years ago — the Allies formally announced its acceptance of Germany’s unconditional surrender.

It was Victory in Europe Day — or VE Day.

Since June 6, 1944, Nazi-occupied Europe had faced the Red Army juggernaut coming from the Soviet Union as well as the American, British and Canadian troops who landed on the beaches of Normandy on D-Day and kept moving towards the heartland of Germany.

The Second World War was over in Europe. Hitler was dead, having committed suicide in his Berlin bunker just days before the Russians arrived. Russians were wartime allies with America, part of the Allied Powers.

American and Soviet soldiers met just once, at the Elbe River on Apr. 25 — but the U.S. forces would go no further east as Stalin had been promised the honor of taking the Nazi capitol.

The fight on the Eastern Front (virtually unknown in Hollywood’s retelling of the war) was both a titanic struggle between two ideological enemies but also a vicious racial battle — “a war of annihilation”— where a lot of the Holocaust occurred. From June 22, 1941 — when Germany broke a non-aggression pact and invaded the Soviet Union — the Nazis rarely had less than 80% of their land forces devoted to operations in the East. (RELATED: Watch The Harrowing New Trailer For The Upcoming World War II Film: ‘Dunkirk’)

If American and allied forces had not stormed through Western Europe, it is possible that Soviet dictator Joseph Stalin would have kept his unruly army marching all the way to the Atlantic Ocean.

Then-President Franklin Roosevelt had always seen Germany as the greatest threat to world peace and security and actively supported Britain in its fight against the Nazis with programs like lend-lease long before public opinion caught up with him. U.S. Navy ships were actually accompanying British convoy forces in the North Atlantic and dodging German U-boats. Hitler was the villain that FDR knew the U.S. had to deal with first.

But it was the Japanese attack on Pearl Harbor on Dec. 7, 1941, that brought America into the biggest war in history. Roosevelt must have wondered how he was going to convince Americans that Germany was the more dangerous threat and that U.S. resources and manpower needed to be focused on Europe first — but Hitler saved him the worry by declaring war on the United States — even though he was not obliged by his Axis partnership with Japan to do so.

In the next three years, Americans would introduce precision daylight bombing to the Nazi heartland, fight the Battle of the Atlantic and invade North Africa, Sicily and finally France. The sacrifice of men in fighting at Kasserine Pass, Anzio and the Battle of the Bulge is the stuff of legends. They are the stories of the kind of American heroism that so many say that the “Greatest Generation” was so amply endowed with. (RELATED: Here Are The Best D-Day Tributes On The Internet For The 74th Anniversary) 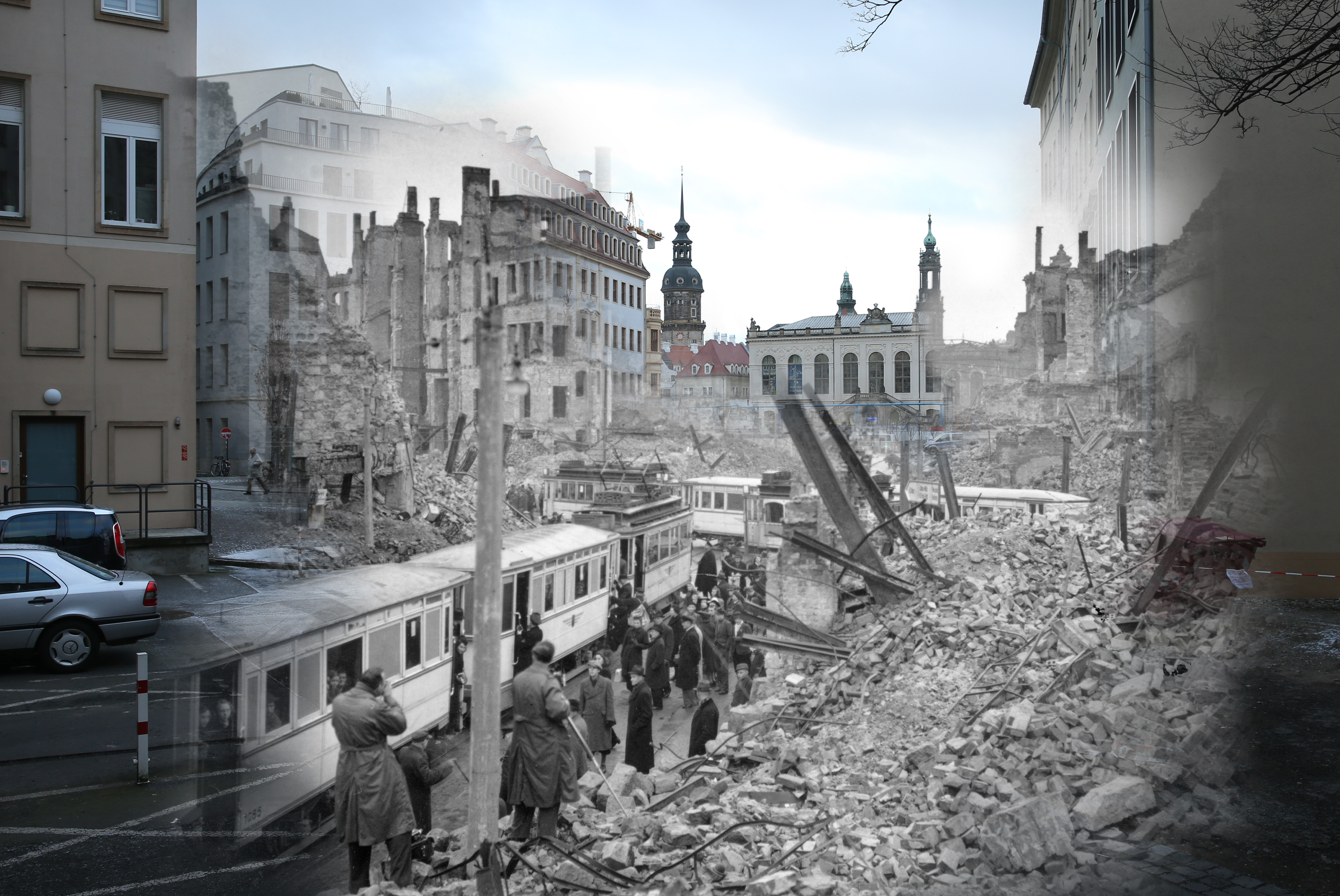 This digital composite image shows Moritzstrasse and the Juedenhof palace in 1946 still wrecked from the Allied firebombing of Feb. 13, 1945 (Photo by Sean Gallup/Getty Images)

After leading the nation through both the Great Depression and most of the war, Roosevelt died unexpectedly in April 1945 and did not live to celebrate VE Day. Although the Second World War was not yet over, Japan’s days seemed numbered — especially since the U.S. had the atomic bomb.

A minority of Americans today decry President Harry Truman’s decision to use that bomb against Japan — not once but twice, at Hiroshima and Nagasaki. As visual historian Ken Burns’ excellent PBS documentary “The War” explores so well, Truman agonized over his options but you likely wouldn’t have found much of an argument or reservations from the soldiers, sailors and airmen who were expecting to be rotated form Europe to Asia, and do it all again. The bomb ended the war swiftly and some argue saved a lot of lives, on both sides of the conflict.

The overwhelming weight of American technology and firepower crushed the Empire of Japan. The war was over. It was time for Americans to enjoy the fruits of victory and the new reality of peace and to take up its new task of being the leader of the Free World.