A congressional transcript from March 2017 released Thursday showed that then-FBI Director James Comey was uncertain whether Michael Flynn had knowingly lied to the FBI during a White House interview weeks earlier.

Comey questioned a Justice Department official’s theory that Flynn was vulnerable to Russian blackmail, according to the transcript.

Comey’s statements to the House Intelligence Committee on March 2, 2017, have been the subject of intense speculation over the past several years, particularly regarding his comments on Flynn.

The Justice Department released the transcript Thursday as an exhibit to a motion to drop charges against Flynn for making false statements to the FBI.

Flynn pleaded guilty on Dec. 1, 2017, to lying to the FBI about discussing sanctions in December 2016 with Sergey Kislyak, who then served as Russia’s ambassador to the United States.

The former national security adviser has since retracted his claim to have lied to the FBI, saying he pleaded guilty in order to protect his son from prosecution in a separate investigation. The Justice Department submitted a motion to drop charges against Flynn, citing the recent discovery of FBI documents related to the Flynn investigation.

One of the documents is an FBI memo dated Jan. 4, 2017, showing that the bureau was poised to shut down a counterintelligence investigation of Flynn. Other documents show FBI officials strategizing about how to conduct a White House interview with Flynn.

Comey authorized the interview of Flynn. Andrew McCabe, who then served as deputy director of the FBI, called Flynn to arrange the interview, and convinced Flynn to speak with the FBI agents without lawyers present. (RELATED: AG Barr: FBI Set Flynn Up In A ‘Perjury Trap’)

FBI officials decided not to warn Flynn about penalties for lying to federal agents during the interview, other FBI documents show.

The transcript of Comey’s briefing to lawmakers shows that the question of whether Flynn lied during the interview was far from an open-and-shut case.

“I don’t know,” Comey replied. “I think there is an argument to be made that he lied. It is a close one.”

Comey told lawmakers that the agents who interviewed Flynn — Peter Strzok and Joseph Pientka — did not see any outward signs that Flynn knew he was lying about his calls with Kislyak.

“And the agents — and the reason I mention their experience is because I talked to them about this — they discerned no physical indications of deception. They didn’t see any change in posture, in tone, in inflection, in eye contact,” Comey said.

“They saw nothing that indicated to them that he knew he was lying to them.” 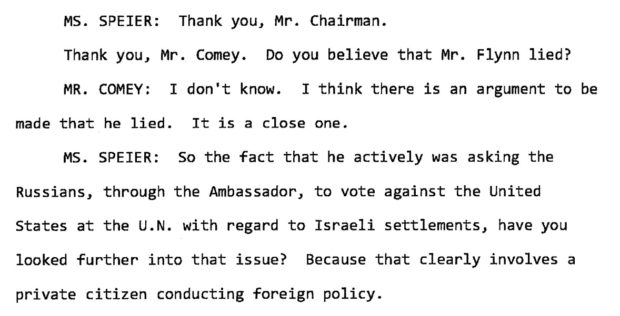 Flynn’s defenders have questioned why Flynn would have knowingly lied in the interview given that he knew that the FBI likely had a transcript of his phone calls with Kislyak.

Attorney General William Barr, who authorized the Justice Department to withdraw charges against Flynn, said in an interview Thursday that Flynn’s calls with Kislyak were legal.

“There was nothing wrong with it whatever. In fact, it was laudable,” Barr said. “So there was no mystery about the call.”

Comey and other FBI officials set Flynn up in a “perjury trap,” Barr said.

Yates told the Senate Judiciary Committee on March 8, 2017, that she briefed the White House on Jan. 26, 2017, about Flynn’s calls with Kislyak in part because she was concerned that the Russian government could blackmail the retired general over the phone calls.

“We believed that General Flynn was compromised with respect to the Russians,” Yates testified. “To state the obvious, you don’t want the national security adviser compromised by the Russians.”

While it was “possible” that Flynn was vulnerable to blackmail, the theory was a “bit of a reach,” Comey told lawmakers.

Yates was highly critical of Comey’s handling of the Flynn interview, according to documents released Thursday.

She told the FBI during an interview on Aug. 15, 2017, that she admonished Comey when he called to tell her that he had sent two FBI agents to the White House to speak with Flynn.

Justice Department officials “hit the roof” when Yates told them of Comey’s maneuver, she said.

“Yates added the interview was problematic to her because as a matter of protocol and as a courtesy, the White House Counsel’s Office should have been notified of the interview,” the FBI’s notes from the Yates interview read.

“The FBI’s approach was inconsistent with how things had been done.”