Billionaire Elon Musk made headlines across the media and earned praise from many conservatives this weekend after he threatened to move his California Tesla locations over lockdown orders.

But some might be missing the real story of Tesla’s recent investments, namely, China.

“Tesla is filing a lawsuit against Alameda County immediately. The unelected & ignorant ‘Interim Health Officer’ of Alameda is acting contrary to the Governor, the President, our Constitutional freedoms & just plain common sense!” Musk tweeted Saturday after California refused to let him re-open his plant in Fremont, California.

“Frankly, this is the final straw,” he followed up. “Tesla will now move its HQ and future programs to Texas/Nevada immediately. If we even retain Fremont manufacturing activity at all, it will be dependen (sic) on how Tesla is treated in the future.”

“Tesla is the last carmaker left in CA.”

Frankly, this is the final straw. Tesla will now move its HQ and future programs to Texas/Nevada immediately. If we even retain Fremont manufacturing activity at all, it will be dependen on how Tesla is treated in the future. Tesla is the last carmaker left in CA.

Come to Texas! We would welcome Tesla HQ in Texas. We love jobs & Texans very much want to open up & get back to work (while still staying safe & following sound science). We make lots of cars & trucks in Texas, and we’d love more!! https://t.co/F9O0N3yase

Texas gets better every day. Good conservative principles make good governance, and attract the best and the brightest. The future is happening in Texas. https://t.co/ZuRzHvqqu5

“He’s one of the biggest employers and manufacturers in California, and California should prioritize doing whatever they need to do to solve those health issues so that he can open quickly and safely.”

But while some may welcome a Tesla plant in their backyard, Musk has already made a big bet on manufacturing and selling cars in China. Tesla began production at “Gigafactory Shanghai” in 2019.

Bloomberg’s Shawn Donnan noted that while Musk threatens California, “You won’t find him doing anything like that when it comes to China.”

Indeed, Tesla’s huge investment into China is based on hopes that Musk could both manufacture and sell Tesla cars in the country by taking advantage of its lucrative internal market. 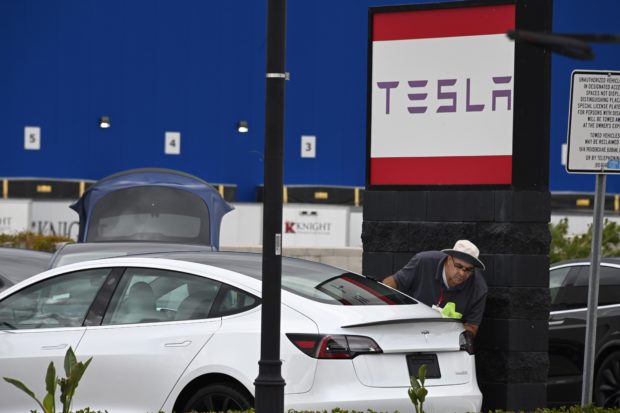 A Tesla employee cleans a car outside a Tesla showroom in Burbank, California, March 24, 2020. – Luxury electric car maker Tesla ended up closing its California plant in Fremont, a concession by its maverick head Elon Musk after a drawn-out standoff with the state authorities over the spread of the virus. ROBYN BECK/AFP via Getty Images

Barron’s reported that Tesla projects at least 30% of its sales will be in China this year, and Tesla has already adjusted the price of its Chinese-manufactured Model 3 sedans in order to get subsidies from the Chinese government.

Moreover, to expand production at the Shanghai plant, Tesla is relying on a big loan from the Industrial and Commercial Bank of China, a Chinese state-owned bank, to the tune of 4 billion yuan, or $565 million.

While many praise Musk for wrestling with California over stay-at-home orders, he is already looking ahead to the Chinese marketplace to provide for his company’s success. (RELATED: Who Is Winning The Trade War — The US Or China?)